Posted by Eddie Pasa on February 11, 2021 in Movie Reviews / No Comments

I haven’t published anything since Christmas Day 2020.
During November and December, studios send critics all of their awards bait, whether on DVD or digital; my job is to go through all of it and see which one’s worthy of accolades, to separate the wheat from the chaff. Around this time, I’m hit with a certain kind of apathy as I digest all of these candidates, which usually results in a kind of brain-freeze lockdown of sorts. Compounded with the political, cultural, and public health crises we as Americans have faced in the last year – especially in the intervening time since my last review – I have been fatigued, trying to deal with these issues by retreating into familiar material for comfort and satisfaction.

Judas and the Black Messiah kicked me right the fuck out of stagnation.
(The profanity is used to make sure you know exactly how this movie made me feel.) 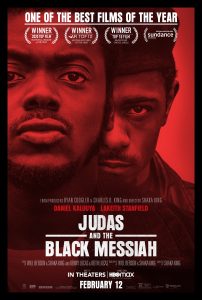 Rarely have I ever seen a film work on so many levels – direction, performance, score, art direction, cinematography, costuming, intent – that it feels like it is a living, breathing piece of art. Not only that, I can definitively say that this is one of the few films which showed me a palpable rhythm in its presentation, enmeshed entirely with its own beat. It’s not a heartbeat; it’s more the push-pull which the best of musicians employ to express themselves within their own trappings, playing over and around the tempo while remaining respectful of where each quarter note lands.

Director/co-writer Shaka King doesn’t just show us his dramatization of Fred Hampton’s life and Bill O’Neal’s machinations; he makes us feel every second of the history and the life of 1960s Chicago torn apart by racial tensions and the push for equity. Thanks to brilliant turns by Get Out alumni Daniel Kaluuya (as Hampton) and LaKeith Stanfield (as O’Neal), Judas and the Black Messiah sinks us into the Illinois Black Panther Party as Hampton moves charismatically across color, racial, and socioeconomic lines to unite against bred-in-the-bone systemic racism. As the title suggests, there’s a force working against him, personified by O’Neal’s slight but consequential actions undermining Hampton’s progress. Coerced into working with FBI Agent Roy Mitchell (Jesse Plemons), he tips enough about Hampton’s movements and operation without giving himself away. 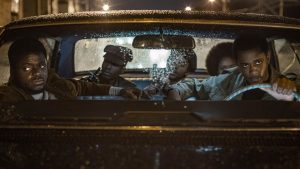 Yeah, you can learn about Fred Hampton and Bill O’Neal from doing a five-minute read on Wikipedia. But what Judas and the Black Messiah does is engage the viewer by erasing the window between the present and the past with alarming clarity amid ambiguity. Oxymoronic it may be, but there’s something more that Shaka King and co-writer Will Berson want us to experience. There’s a gray area in which this film lives, where opponents aren’t always the aggressors and the heroes aren’t always the knights in shining armor. It’s more walking a line with your best intentions in front of you, each step leaving the lifted foot dangling precipitously on either side in danger of being tarnished by what lies beneath.

What the film does best is humanizing both Hampton and O’Neal, with Daniel Kaluuya’s and LaKeith Stanfield’s portrayals beckoning us to go further with them, daring us to share the air they breathe and the injustice they face. On one hand, Hampton’s public face shows the streetwise sage who looks constantly to turn each obstacle into an opportunity while being just another Joe in private moments with girlfriend Deborah Johnson (Dominique Fishback). King and Berson’s script makes plain the struggle between what Hampton has to do to further the Black Panther movement and looking toward the future with a potential family. It’s not an easy balance to maintain, but Kaluuya emotes this battle between head and heart with skillful agility, creating an electricity that grasps your very soul. With each tender moment between Hampton and Johnson contrasted with the personification of the in-control Black Panther leader – defined with a stunning pulpit speech toward the middle of the film – Kaluuya’s mastery holds us in a masterful thrall. 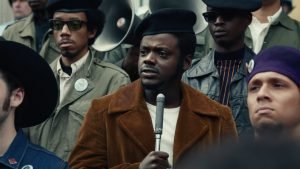 Opposite Kaluuya is LaKeith Stanfield’s Bill O’Neal, wriggling his way in and out of suspicion and detection. Tasked by Agent Mitchell to give intelligence reports on the Black Panthers, we’re seeing a man fight to stay alive while playing both sides. While the script gives O’Neal obvious outs, he still has to contend with betraying his beliefs in order to keep himself out of jail or from the wrong end of a bullet, and Stanfield disappears into O’Neal in this endeavor with a chameleon-like prowess, molding himself into whatever situation comes his way. Whether rebuilding a bombed-out office or slipping Agent Mitchell floor plans to help the FBI’s next raid, O’Neal never acts like someone caught in the middle; there’s a sheen of self-preservation which Stanfield delivers with a note of perfect self-righteousness, never letting his guard down or giving too much away.

Shaka King’s direction and stylistic choices make this movie hum and thrive with a thrilling jolt of energy. It’s not by being bombastic or over-the-top; instead, it’s in letting moments breathe and be, allowing each scene to unfold and tell us its wisdom. He also makes sure to let our senses be overwhelmed by different facets of the presentation, giving performances, Mark Isham and Craig Harris’ score, or Sean Bobbitt’s cinematography (watch for spatial conflict in each dolly, rack focus, and zoom) their due time to tell their story. Whether it’s a close-quarters scene in O’Neal’s car, Hampton’s galvanizing speech upon his prison release, or even a living room chat between O’Neal and Mitchell, Judas and the Black Messiah exudes a palpable spirit of “You are here; be here and observe” while each storytelling element washes over you with rapturous aplomb. 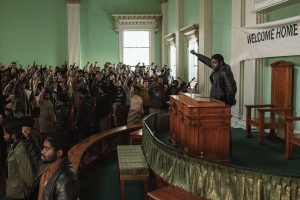 I don’t know why I haven’t wanted or haven’t been able to write about anything I’ve seen in the intervening time between Christmas Day and now. All I know is that this film boasts an importance and a “thrill of being” missing from the other films I’ve had to ingest. Judas and the Black Messiah is an eye-opening film, possessing and wielding a fury and drive I haven’t seen since my father had to buy me a ticket to Glory in 1990. It’s not just about the dramatized manipulations of government forces working against an oppressed people; it’s about what it takes to rise against these forces, even knowing that the cards are stacked against you, standing in the face of extermination and throwing up a middle finger while fighting for a better future.