Posted by Eddie Pasa on December 1, 2020 in Movie Reviews / No Comments

Every now and again, a movie comes along which hits you in a place that makes you feel like you haven’t lived up to your brain’s full potential. A movie that relishes in smarts without being too smart as to be inaccessible. It’s the kind of thing that lets you know the impossible may be within grasp, and if you’d only done better in school, maybe you’d be on the cusp of discovering it. True, the science in Minor Premise is rooted in fact, but it’s what the story does with those facts which makes you wonder if such delights and horrors could actually exist. 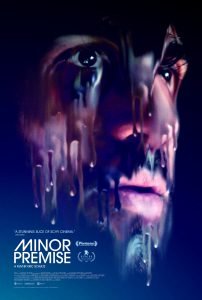 Where Minor Premise triumphs is in making its scientific preposterousness tangible and real, thanks to a crushing script, tight direction, and holy-gee-wow performances by its actors. Based wholly on connectomes – a map of a brain’s “wiring” – this film throws two young scientists into a fight for salvation, redemption, and discovery amid damaging consequences and unspeakable danger as they explore the different parts of our brains which constitute what makes us human. The film unfolds a lot like 2004’s surprise Primer, in which two researchers unwittingly discover time travel and the various implications of what their accidental contraption has yielded.

Here, blackout-prone Ethan Kochar (Sathya Sridharan) already has a leg up, running with experimental equipment which his father, Dr. Paul Kochar (Nikolas Kontomanolis), developed before his untimely passing. A machine called the R9 has already unlocked access to a subject’s memories, pulling them from the brain in the form of blurry, multi-angled, disjointed movie clips. Funded by a local university and trying to surpass his father’s legacy, Ethan has been tasked with continuing these brain experiments with a prototype R10 in his basement. And he’s chosen a bad time to use this machine on himself, facing pressure from the university, his own personal ghosts and afflictions, and demanding project leader Dr. Malcolm Blume (Dana Ashbrook). 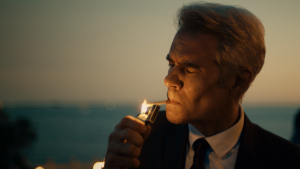 This process goes a step further and gives Ethan a connectome showing ten specific sections of his emotions and psychological operations, which he exploits in a drunken stupor to try to amplify his intellect, in addition to solving his blackout problem. When he wakes up and involves ex-girlfriend and fellow scientist Dr. Alli Fisher (Paton Ashbrook), he discovers a devastating flaw in his endeavor – instead of enhancing his intellect, he deduces that his drunken actions have separated these ten sections into ten different personalities, and one at a time, they take over his consciousness for six minutes each hour. Alli guesses it’s a lot like Dissociative Identity Disorder, considering each personality doesn’t know what the other is doing.

On her first contact with Ethan after his misguided experiment, she sees all of these sides of him – “You were all over the place,” she says, with attempts at sexual gratification followed by a period of unconsciousness, and then they both see that one of these sides has drugged Malcolm and locked him in a closet. So begins a race against a clock which keeps a rigid tempo for the timed appearances of these ten sections of Ethan’s personality and seems to be counting down to total system failure – meaning Ethan’s brain death – while Alli has to contend with each separate personality manifesting in Ethan at the turn of every six minutes. The only options are full reintegration of Ethan’s brain, vegetation, or spending the rest of his days – no matter how long – completely locked into one of his ten personalities. 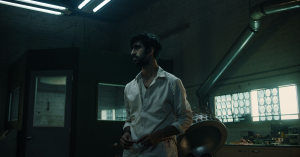 It’s an incredible setup which director/co-writer Eric Schultz defines for us, and he displays an unrivaled talent in thrusting us into Ethan’s time-slips while keeping a consistent, cohesive narrative. Schultz and co-writers Justin Moretto and Thomas Torrey keep us in the game with hooks and carrot-dangles, each of them paying off with resonance and power as we’re wended through the labyrinthine path of Ethan’s blackouts and personality changes. Although the sound is mixed low (seriously, the dialogue in the trailer below is mixed more audibly than the film itself), each word, action, glance, and mannerism has us hanging on for dear life. It allows us time to fully appreciate which side of Ethan has come to the fore and either rejoice or look on in terror at the massive unpredictability of each encounter.

Surprisingly, CGI is kept to a minimum, leaving the actors to gift the movie with their own brand of special effects, especially with Sathya Sridharan’s gaunt countenance worsening as every iteration of his character either throws a wrench into the machinery or drives the experiment forward to get himself back to normal. Sridharan gives one of the year’s best performances as a man under intense professional and personal duress, alternating between these ten different portrayals of Ethan’s conscious. Because of the nature of these unbridled personas taking hold at different times without temper or restraint, Sridharan has to pull off a magic trick which shows him fluidly flipping between euphoria, psychosis, rationality, and other unchecked emotions, and it’s a magic trick which succeeds in pledge, turn, and prestige. 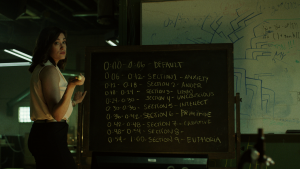 Countering him beat for beat is Paton Ashbrook, who guides Alli into not just a supportive role, but embodies someone who commits to the job and ensures it’s done. For every personality change Ethan undergoes, Alli has to play right back at him, but not so much as his foil; instead, she’s a co-conspirator, leaning into the science and process when Ethan’s intellect takes over, stepping back or reining Ethan in when he’s off on his other tangents. Ms. Ashbrook (co-star Dana Ashbrook’s niece) forges Alli into the immovable object in the face of Sridharan’s unstoppable force and carries Alli’s weight – her previous relationship with Ethan, the professional limitations and tasks, and the legal implications of what they’re doing – with meaning and strength. She’s not some side banana written in to take abuse; she’s the only stable character of the two, providing the audience’s baseline for the many leaps of faith we’re asked to take.

Sliding in at the end of the year, Minor Premise sits as one of 2020’s best, an out-of-nowhere blast of originality exploding with a strong script, outstanding direction, and valiant performances. There’s something about this film which doesn’t just strain at the leash to be let loose; it journeys undaunted into the crevices where we dare not go, exposing the fearsome sides of us restrained by a few wispy strands of basal ganglia. This is fearless, take-no-prisoners filmmaking without bending to the will of investors or studio interference, and director Eric Schultz has the good sense to balance audience expectations with a damn-the-torpedoes-full-speed-ahead sensibility which keeps us in feverish thrall until the last frame rolls.