Posted by Eddie Pasa on December 3, 2020 in Movie Reviews / No Comments

For a film dramatizing an emotionally-loaded real-life story, All My Life doesn’t manage to share these emotions with its audience and make them a part of it. Instead, we’re given a feel-good, greatest hits-style montage instead of a movie. It has the effect of holding one at arm’s length, as if to save them from the pain our characters endure onscreen. Sure, there are moments that are given their due, but for some reason, the film dares not go deeper into the life-destroying circumstances of its characters. 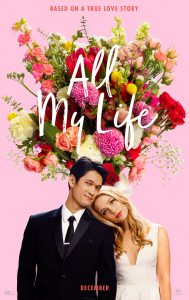 If the filmmaking team’s aim was to inject bright happiness into a bad situation, then by all means, “mission accomplished.” From all reports, Solomon Chau and Jennifer Carter were happy, loving, and well-loved, and their story would have lasted a lifetime, had it not been for the sudden onslaught of cancer which would eventually shorten it. Not having the money for their wedding, friends and strangers from all over donated via GoFundMe for a wonderful ceremony which took place at Toronto’s Casa Loma, an event which occurred 128 days before he passed away in his sleep.

Reading articles on the internet about this couple for background was more edifying than this meticulous streamlining of their lives by screenwriter Todd Rosenberg and director Marc Meyers. It’s as if you had a rich stew full of vegetables, meat, broth, rice, and spices… and then everything is replaced with shiny, new ingredients to make the same dish, only none of them work with each other. Of course, it’s not meant to be true-to-life; the world’s too full of drudgery already, so Rosenberg has chosen to try to mine as many life-affirming bits of Sol and Jenn’s fight as possible. Which, I guess, is at least a noble intent. 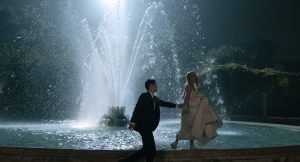 However, it becomes a problem when every scene lobs an attempt at emotional spikes or nadirs. There’s no sequence where we spend time to get to know Sol (Harry Chum Jr.) and Jenn (Jessica Rothe) or their friends as people and humans. Every collection of dialogue contains some kind of “this is the lesson” moment, from the bookending voiceovers to something as minimal as getting a cup of coffee or whatever pithy aphorism comes out of Sol or Jenn’s mouths. It’s as if each character has to carry an Inspiration Flag and has to make everyone around them – including the audience – salute. The experience would be a little more gratifying had a cumulative three extra minutes been granted to tell us who any of these people were besides figurative cheerleaders. Maybe show what kind of music or movies they liked, or having a quiet moment or on some random dates, or giving us a clue that bar owner Gigi (Ever Carradine) is supposed to be Jenn’s mother, something, ANYTHING to make us feel for them.

But this film’s 93-minute running time demands something else. We’re sped along from a meet-cute at a bar to the honeymoon; while this definitely underscores the fleeting nature of love and Sol and Jenn’s life together, it makes all the difference between telling a story and showing a story. And if the film’s pacing wasn’t a statement enough for you, Rosenberg hammers it home by having every line of dialogue repeated or given some symbolic nonverbal closure somehow later on in the film. There’s not a moment shown left open or dangling; everything must be completed or doubled. It’s an exercise in the total eradication of the inconsequential, and it hurts the film to the point of banality. Seemingly throwaway lines are suddenly given ponderous meaning in callbacks and gags for a shameless grab at sentimentality. 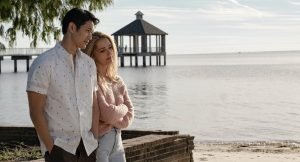 And because of this manner of filmmaking, Harry Shum Jr. and Jessica Rothe don’t get to do a lot but either look googly-eyed in love at each other or be a shoulder to lean on. They do what they can to make their characterizations count, which keeps this movie one step away from completely breaking out the pom-poms. Yet they never look disheveled or out of place; regardless of whether they’ve been crying or silent in an oncological scan, the immense toll being paid never shows on their faces, their makeup, or their clothing. No aesthetic choices are made to foster any belief in their battle for the need to keep strong, valiant, and in-control appearances.

Maybe it’s me. Maybe I’ve grown too cynical and just expect movies about cancer patients to be a little bit more than something which never shows extended periods of visible sickness. Maybe I want things a little more moody than an easily-resolved shouting match in an apartment bathroom. Maybe I’ve seen what cancer can do and I don’t like the fact that this film glosses over the darker parts, the bits of insecurity and anguish where nothing makes sense and grief takes hold. Maybe 2020 sucks and it might seem like I’m taking it out on All My Life. It could even be the film we need in these disillusioning times, for all I know. But nothing is given for the audience to take root in these characters and their journey except for trite notions and phrases that want to be the next “You complete me” or “Love is never having to say ‘you’re sorry.’” All My Life is unfortunately empty, misguidedly spending its energy in creating a legend where a simple story would have sufficed.

MPA Rating: PG-13 for brief language. (Honestly, this could’ve been PG – there is nothing truly objectionable in this movie.) Running time: 93 minutes. Released by Universal Pictures.
Posted in Movie Reviews