Posted by Eddie Pasa on December 2, 2020 in Movie Reviews / No Comments

In 1993, Richard Linklater’s Dazed and Confused – a film focusing on the tumultuous final day of school in 1976 – showed audiences the chasm between personal struggles and teenage ennui being bridged by mischief, disappointment, love, enlightenment, and a blowout party. Most of the film centered on rising seniors and their want to carve out their niche for the next year; the newly-graduated eighth graders get ritualistically hazed, with a few invited to join the high schoolers in their revelry. While these few kids play linchpin roles in the night’s festivities, they’re mostly relegated to the background until their story threads pick back up. 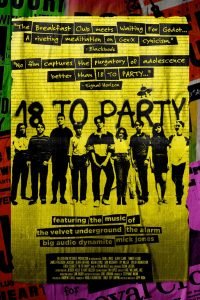 By its very nature, Jeff Roda’s 18 to Party can be considered the Rosencrantz & Guildenstern Are Dead to Linklater’s teenage epic. Its opening shot demonstrates its aim, capturing high school students in the fall of 1984 partying in a parking lot and lining up to get inside the local teen club. They’re all looking to have a good time, including a small group of younger grade school kids who are told to go to the back and wait their turn after the high schoolers. It’s these shunned children who we’re going to be getting to know while they sit, aimless and anxious, anticipating the big moment when they get in.

“Get in.” These two words encapsulate the entire spirit behind the film for these youngsters caught in the turbulent space between adolescence and young adulthood. All of them arrive to this back lot hoping to look cool while partying with the big kids, but there’s much more on their minds. Observations about absent and neglectful parents, academic and social goals, a weirdly high teen death rate in their town, suicide, traumatized friends, a possible UFO sighting, and the state of the world dot their wary, weary conversations. And all of it is delivered perfectly in the puffed-up, overly-important way we used to talk as kids trying to sound more mature, knowledgeable, and important than we truly were at the time. 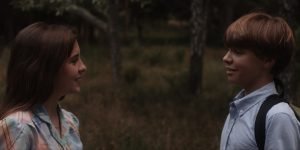 All of these themes they either tackle head-on or avoid out of discomfort are their ways of “getting in,” passing whatever test (real or figurative) life throws at them and progressing to the next chapter. For Shel (Tanner Flood), it’s doing better than a 3 out of 5 on a pop quiz and deciding if he has time to do school, soccer, and be a part of the drama club, the latter of which his crush Amy (Alivia Clark) is trying to persuade him to do. Shel’s best friend Brad (Oliver Gifford) seems to be hiding a certain kind of pain, using it to lash out at the constantly-bickering Dean (Nolan Lyons) and Peter (Sam McCarthy), who argue about everything. Artsy punkers James (Erich Schuett) and Kira (Ivy Miller) arrive next, the latter of whom comes with the “everything and everyone sucks” thunder while constantly insulting Missy (Taylor Richardson) over an accident at a party. To throw additional gas onto the fire, local “bad kid” Lanky (James Freedson-Jackson) turns up, recently removed from their school due to the suicides of his brother and his brother’s girlfriend, and now medicated beyond the point of caring about anything.

This mostly single-location teen drama goes from the macro to the micro, using its short running time to drill down to what’s bothering each of them at their cores. The UFO sighting serves as a reason to have their parents’ attention taken away, with one boy wistfully saying that his parents don’t really care what he does anymore. Missy and Kira, once best friends, rip away at each other until their reasons for mutual hate are exposed. Shel’s brought a huge backpack in preparation for sleeping over at Brad’s house after their time in the club, and there are one or two surprises he might be holding. 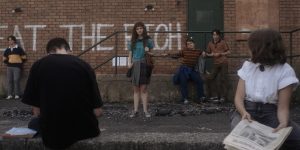 What’s striking about 18 to Party is that we’re catching these children at a turning point in their lives as they try to come up with what or who they want to be. Their struggle is made plain through clothing choices, hobbies, actions, and other nonverbal cues that attempt to cover their confused personalities and their own hurt. And that’s what writer/director Roda nails perfectly – the clumsy and awkward fumbling we all go through on our way to “getting in.” This isn’t a film about performance or photography (although both are very good), but about rediscovering the feeling that our whole lives were once ahead of us and how much we had yet to learn. Childish concerns like whether or not U2 stole The Alarm’s sound, pellet guns, stolen girlie magazines, and first kisses all seemed so vital at the time; 18 and Life uses these (and more) to reconnect the viewer with the simpler times when we didn’t have to worry about adult stuff. We only had to worry about acceptance by our peers and ourselves, the biggest step toward “getting in” any kid can take.

Not Rated by the MPA (contains language, mild violence, smoking, and drug use – all involving children – equivalent to R). Running time: 80 minutes. Released by Giant Pictures.
Posted in Movie Reviews