Posted by Eddie Pasa on November 13, 2020 in Movie Reviews / No Comments

Please note: This essay was written after seeing an English-dubbed version. I abhor dubbing, but it did not blunt the effect the film had on me.

At first glance, the Russian horror film Sleepless Beauty seems like a knockoff mashup of Saw and Untraceable, where a single participant is bound in a room and forced to perform dehumanizing, gory acts for others’ whims. Much of the film is exactly that – a lovely young woman is abducted, placed in a grimy room (not unlike the first room we see in James Wan’s original Saw from 2004), and tortured to the point of madness. However, there’s a chilling, if not too on-the-nose commentary to be appreciated about where we are as a society. 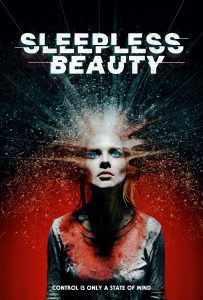 We spend our days and nights clinging to vestiges of hope amid brutal images and stories of our personal or collective pasts on social media, jumping on the next big controversy or fad like it’s a lifeline to a better existence. Not only are we being tortured, but we’re also the ones doing the torturing, whether we do it to ourselves or other people – strangers or acquaintances – and sometimes enjoying it with the sick pleasure that has been shamelessly and remorselessly ingrained in us by idolizing the lowest common denominator. And when we’re with friends, we find delight in bonding with each other over the shared experience of “owning” whoever gets in our way.

Sleepless Beauty exposes these moments through disgracefully identifiable tropes and visuals, most notably in the ways Mila (Polina Davydova) is treated throughout. This vivacious young girl is abducted in the middle of establishing a habitat for her newly-bought fish and brought to a dimly-lit chamber where a flat, disembodied voice gives orders over industrial loudspeakers. A man in a black ski mask and matching clothes throws her into whatever task she’s meant to be doing, a powerful electric stun baton at the ready in case she doesn’t comply or if she needs to be unconscious for the next phase of her training. She’s also forbidden to sleep, thus exacerbating the ordeal beyond measure. 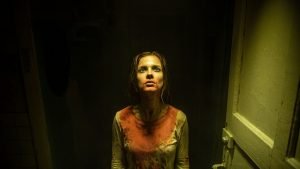 A quick prologue details a diplomatic assassination gone wrong, and chatroom messages tell us that it will be carried out again, but a trial run needs to be done first to ensure success. Mila is part of this trial run, subjected to sensory-depriving anguish with the goal of breaking her down physically and mentally. The man in black (seriously, there’s no name given for the character) acts without words, pity, or fear, and he feels like just as much of a puppet as Mila seems to be in this experimental training session. Mila’s given at least two chances to escape and gets the upper hand on him at one point, but he does nothing except force her into the next portion, whether it’s being traumatized by memories of a possible abortion or being placed in a coffin with rats.

At various points, she’s made to watch disturbing animation through VR goggles, implanting triggers and turning her into a shell-shocked weapon. These bloody, horrifying images are insanity defined, irrevocably crammed into her brain and leaving an indelible imprint no amount of deprogramming could ever erase. Meanwhile, as this process is broadcast via a secure internet stream, a side chat features observers’ comments ranging from missives like “All right! Now the hardcore!” to “This is sick, I’m leaving.” Others seem to be rooting for this woman’s destruction, with administrators dropping in to tell the audience what’s going on or to behave accordingly, dismissing anyone whose comments do not meet their standards.

The police investigation into Mila’s disappearance is straight out of the “caring just enough to do the job” kind of playbook, where Mila’s parents and neighbors are questioned and a forest is searched, but there’s purposely no real passion in it. In cases like this, who knows what they’ll find or if they’ll find Mila (or others disappeared like her) at all? A body is produced for Mila’s father to confirm identity, but it’s not her. We’ve seen this kind of police work in other movies of this kind, but here, it strikes a bit of a different chord in its procedural, barely-there feel. Finally, when Mila evolves into what she becomes at the movie’s end, the metaphor is completed. All the psychological and physical torment causes her to lash out viciously at the first person she sees, and it’s evident the cycle will continue.

A similarly nihilistic film I reviewed earlier this year also highlighted a certain sense of bleakness and pessimism in the belief that our self-harm as a society is never-ending and self-perpetuating. We could turn away from the horror we see every day which pushes us to extremes, either to being jaded narcissists or losing ourselves in the battles cropping up seemingly every other hour. This year alone makes the finale of Sleepless Beauty almost seem anticlimactic, but that’s the point, isn’t it? After being dehumanized and wasted, what else is there other than to feel drained after bombarding ourselves with what’s being fed to us from external stimuli? Dressed up in familiar horror movie clothes, Sleepless Beauty’s commentary comes in like a pistol shot and leaves its trail of destruction quickly and efficiently, exposing our bottom-feeding social media-fueled selves for what we might be: a bunch of depraved people on the sidelines watching as blood is spilled for nothing.