Posted by Eddie Pasa on November 25, 2020 in Movie Reviews / No Comments

The conceit of Getting to Know You is readily familiar, where strangers pretend to be spouses and genuine feelings get in the way of their playacting. However, writer/director Joan Carr-Wiggin admirably steers it away from the cliché and the used, guiding the film to better places where things don’t work out the way we want them to. It’s Carr-Wiggin’s story, and she can damn well take us anywhere she pleases, thank you, and she dares to take us into quieter, more thoughtful moments which escape more modern, frequently-trod takes on this trope.

So many chances are given for this film to spin wildly out of control and into more overt territory, but Carr-Wiggins avoids it by giving these kinds of shenanigans to peripheral characters. Right from the off, we’re greeted with loud, overly-groany sex behind a hotel office door as weary travelers Abby (Natasha Little) and Luke (Rupert Penry-Jones) step up for assistance. Abby’s there to see her estranged brother buried; Luke’s in town for a high school reunion, which – judging by his solitary presence – hasn’t ended the way he thought it would. 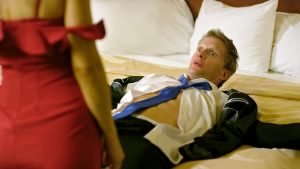 Bonding over this untoward experience (and the shoddiest hotel service seen on film since the Hotel Broslin in Basket Case) these two exchange their stories and strike up a good acquaintance. Luke, slightly drunk, blathers on about his high school girlfriend and his checkered past, both of which he’d hoped to confront positively during this visit. He notices the wedding ring on Abby’s finger and doesn’t prod her to say or do anything she’s not comfortable sharing; all he wants is some company to avoid the hell of being alone with the memories of his ruined night.

Abby, on the other hand, is rather buttoned-up, yet there’s a softening happening which Little defines gradually. It’s a guard she puts up and never fully lets down, but little hints of mischief come poking through with quick smiles and a general ease with which she handles Luke. To be clear, he’s just lonely but doesn’t want to have anything to do with her physically, which leads into how she gets roped into acting as his wife when a completely hammered Kayla (Rachel Blanchard) – “the one that got away” from Luke – shows up, fully ready to leave her inattentive husband and two kids to start anew with Luke.

So begins a farce that lasts a little over the span of maybe 36 to 40 hours which sees Luke reuniting with friends from his past and Abby reuniting with the memory of her deceased brother. Through their charade, they have to get Kayla back home, steal the “Dear John” letter she wrote, fend off advances from Kayla’s misunderstanding husband, host Abby’s brother’s funeral and clean out his house, figure out the identity of a woman in a picture left on her brother’s coffee table, witness a bizarre love triangle among the hotel employees, and – most importantly – deal with the romantic tension building up between them. 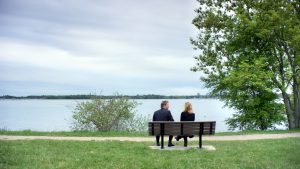 Sounds easy, doesn’t it? What Joan Carr-Wiggin gets so right in her story is the perfect placement of obstacles shimmying into Abby and Luke’s path, all of them serving to dish out more reasons for this twosome to develop a kinship with each other. Which, of course, becomes the biggest obstacle they encounter as each of them strives to walk a more respectable route. Carr-Wiggin also maintains the overall humanity of the piece, acknowledging mistakes and putting these errors in their place before they lead to greater trouble. We can feel the emotional burden growing as Abby and Luke spend more time with each other, and yet the script stays one step ahead of itself to quash obvious trails into the expected.

Of course, having two terrific leads makes it all the easier. Natasha Little and Rupert Penry-Jones (both alumni from different eras of the BBC show “Spooks,” known as “MI-5” in America) play well off each other and have such solid chemistry that begs to have some kind of physical closure. Although we’re rooting for some intimacy between Abby and Luke, they give their characters more of a deeper compact in the extremely short time together, one that goes beyond mere sex. Although some bits of the script tend to have an awkwardly naïve, high-school-play bent, these two make confident strides to make their situation seem human and tangible without resorting to overtired “will they or won’t they” drivel. 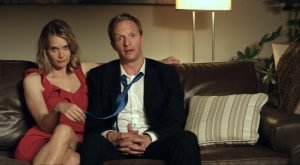 Little never plays Abby as a helpless, easily-led woman who gives in at the first sign of sexual attention, and the strength she gives her character is one of the film’s sturdiest foundations. Abby’s smart, definitely not a “just let things happen” kind of woman. She knows what’s going on and is fiercely protective of who she is and what she’s made of, fully in command of her own methods and limitations. Opposite her, Penry-Jones gives Luke a warmth and aw-shucks personality, as if he’s scared of the result of pressing any kind of advantage upon Abby (or the extremely forward Kayla). There’s a genteel pensiveness in Luke, growing well past attraction to Abby but staying ever-respectful of her marital boundaries.

Abby and Luke are good souls, and one would hope that would be enough to buoy their friendship, but comedies like these aren’t made for such sentiments. There’s an intensity that negates mere friendship due to their short time together coming to an end, where every glance or touch is electrically amplified and every word hinges perilously on the other’s perception. But Joan Carr-Wiggin defies expectations with Getting to Know You by making it an anti-sex-comedy where respect and love truly mean more than the carnal, where “being there” for someone counts immeasurably, and where a short time span provides memories for a lifetime.

Not Rated by the MPA (contains language and adult situations – equivalent to a light R). Running time: 103 minutes. Distributed by Gravitas Ventures and Paragraph Pictures. Now available on VOD.
Posted in Movie Reviews