Posted by Eddie Pasa on November 13, 2020 in Movie Reviews / No Comments

Picture it: Santa Claus as a real, working-class man with his wife, elves, sleigh, and the mission to deliver toys to all the good children and coal to all the bad ones. And then picture a smarmy, overentitled turd of a kid who resorts to near murder when he doesn’t win Best in Show at his school’s science fair. You think Santa’s going to give him a toy or coal? If you guessed “coal,” all that’s left is for you to picture this little asshole hiring a hitman to get rid of Santa. 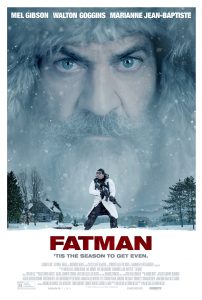 Welcome to the black comedy of brother duo Eshom and Ian Nelms’ Fatman, a film that feels a little underdeveloped but manages to get the job done. It’s all right, but there’s nothing much memorable about it; it’s one of those “Ehhh, nothing else is on, so this’ll do” kind of films due to its lack of energy or spark. Sure, Walton Goggins is always a hoot to watch, but even he only gets maybe one really good, quotable line in the whole movie. It’s somewhere between a very darkly-humored “Saturday Night Live” sketch (or, quite possibly, the action movie opening of Richard Donner’s Scrooged) and bemoaning a lack of goodness in the world, all of which comes off sounding like a junior year high school short story stretched into a feature film.

Calling this a straight comedy isn’t quite right, as its humor is so dark, you can’t laugh at it. As the spoiled, rich grade-school kid, Billy (Chance Hurstfield) lives in a big house with his ailing grandmother, his father nowhere to be found and only being heard from when he sends a thoughtless present back for him. Surrounded by a house staff he mistreats, he feels like he deserves everything, even the aforementioned prize at his science fair. And when he doesn’t get it, he hires the Skinny Man (Goggins) to kidnap her and bring her to Billy’s basement, where he threatens her with shocks from a 12-volt car battery in a scene reminiscent of Mel Gibson’s torture in 1987’s Lethal Weapon.

Speaking of Mel Gibson, he turns Santa into salty, bearded gruff Christopher Cringle, a man who lives on a remote Alaskan farm with his wife Ruth (Marianne Jean-Baptiste). When we first see him, he’s firing a .45 at empty cans – but why? Is it just to establish Chris as someone who knows how to handle himself, or is it to make us laugh at the kind of backwoods life Chris lives? Or is it merely to scream “THIS AIN’T EDMUND GWENN!” at us? (Edmund Gwenn, of course, played Kris Kringle in the 1947 film Miracle on 34th Street.) Because of the dwindling amount of good boys and girls in the world – a passing news report concerning kids heaving rocks off a highway overpass seems to make the case for him – and the fact that his pay from the US government is contingent on the volume of toys delivered, a new contract is drawn up which puts his elves (no, seriously, there are elves!) under the auspices of the US military to manufacture fighter jet hardware.

Likewise, we catch the ruthless, soulless Skinny Man (he’s got a name, but we won’t spoil that) at work, firing silenced guns at his victims while they’re asleep in their beds. Think of him as the anti-Santa, sneaking into people’s houses and delivering death instead of happiness, taking toys labeled as “Made in Santa’s Workshop” from their owners, whether with cash or by force. Without any kind of conscience, he carries out his assignments – especially those set forth by Billy – with a cold, pointed manner. He’s written as an attempt to bring some kind of levity to the film, full of the odd, methodical peccadilloes (in this case, being scrupulously clean and overly polite, and owning a hamster) which seem to be a stock characteristic of movie hitmen. 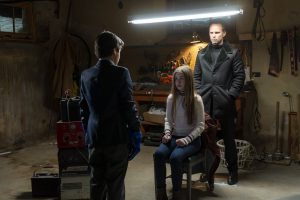 There are some charms to be had, mostly with Johnny Derango’s film-elevating cinematography capturing Richelle Wilk’s superlative, low-key art direction. Textures and tones match each character well, even amid the snowy landscape of Chris’s surroundings. Mel Gibson still has some magnetism left, cutely and befuddlingly walking around his farm and workshop as it’s taken over by the US military, but also possessing the intensity of a man at the end of his rope while trying to defend himself against both the government and the Skinny Man. He’s good enough to hold this down, and Marianne Jean-Baptiste has a grounding way of balancing his burliness with her sweetness (until a very unexpected late turn) and many, many plates of cookies.

But therein lies where the film doesn’t go far enough. Fatman’s dichotomy could be likened to a swing dance competition; it’s dressed right and looks good, but it’s doing a slow-footed shuffle where it should be doing a Lindy Hop Swingout. It doesn’t go far enough with what it has, opting instead to stop just short of each scene landing the way it should. This odd feeling could be summed up in one shot, where Billy runs outside, aghast at the lump of coal he’s just found under the tree; he falls to his knees in the snow while the camera cranes up and away from him as he yells, “YOU JUST MESSED UP BIG TIME, FAT MAN!” instead of something more punchy or original.

The film is full of these knowingly jokey, splashy moments, and they’d certainly be funny if they hadn’t been done before. As a result, Fatman feels like a clown car parked in a lot without its occupants allowed to get out, a parading parody of tropes that doesn’t go anywhere. More to the point, it doesn’t go where it should go, as if the brothers Nelm felt the need to pull it back before possibly veering into more slapstick or dangerous territory. Every time you feel like it’s about to cut loose and strut around, there’s something hamstringing any progress toward true enjoyment, and you’re either forced into liking it or dismissing it just as quickly as the film itself dismisses its own sense of fun.