What the hell happened to Andrzej Bartkowiak, the legendary cinematographer behind Speed and films helmed by the likes of Sidney Lumet and Joel Schumacher, and director of guilty pleasures Romeo Must Die and Cradle 2 The Grave? His new film, Dead Reckoning, is an absolute dud, awash in superficial tension and a severe lack of wits. Its publicity materials call it an “action-thriller,” but there’s little action or thrills to back it up; instead, all we get is a story with no depth that gives us no reason to attach ourselves to it. 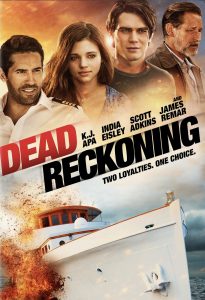 This is worse than late-night made-for-cable hijinks, folks; at least with those films, there’s some kind of schlock value, a “so bad, we’re gonna get drunk and have a blast making fun of it” kind of vibe. Kristin Alexandre and A. Wayne Carter’s script wants to make us believe in urgency and trouble which don’t exist, and you can tell Bartkowiak is trying hard to make it stick. However, the kind of performances and plotting which fill Dead Reckoning‘s runtime set this film up to fail, which it so miserably does.

On the face of it, you have a good-looking, talented lead cast. Veteran actor James Remar. Cult favorite Ellie Cornell from Halloween 4: The Return of Michael Myers and Halloween 5. Attractive young actors India Eisley and K.J.Apa. To top it all off, there’s latter-day martial arts star Scott Adkins who’s built a solid career in both big movies and smaller, underappreciated actioners. As far as location, we’re in the beautiful setting of Nantucket Island, home to The Muse, where Dave Matthews Band recorded “Ants Marching” and “Tripping Billies” for Remember Two Things. (Yeah, that last one’s a reach, but it’s the only thing I know about Nantucket other than its gorgeous vistas and wealthy, entitled occupants, the latter of which is thrown in our faces at various points in the film.)

Diving in, there’s a prologue about a bombing and Agent Cantrell’s (Remar) subsequent attempted arrest of the bomber. Across town, Marco (Adkins) sits at a bar, glaring at a TV as an FBI official gives a statement of the bomber – Marco’s father – being slain, thus prompting him to take revenge on… the FBI official on TV, not Cantrell. Said FBI official and his wife (an out-of-nowhere Frances Fisher) are then killed when their sabotaged private plane crashes on their descent into Nantucket. Six weeks later, we catch up with their daughter Tillie (Eisley), who’s spent the intervening time on a bender with her friends at Altar Rock (the former title of this film). She’s introduced to a young taxi driver named Niko (Apa) who acts a true gentleman around her, being a good friend by refusing her drunken sexual overtures and safely driving her home to her aunt Jennifer (Cornell). 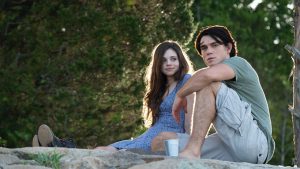 Somewhere or another, Marco winds up piloting a boat to Nantucket to set off another bomb, and the ever-stalwart Cantrell follows. All the while, the friendship and romance between Tillie and Niko is blossoming, bringing Tillie out of her misguided grieving process and setting her back on the path to humanity. But rut-roh – it turns out that Niko is Marco’s brother, and Marco needs his help on his bombing mission. Going further, Niko’s been Americanized and doesn’t want any of what Marco’s doing, and so! begins! the! drama!

Every scene hinges upon the danger Niko poses as Marco’s brother, but there is no danger; he’s a good kid, and he’s got his heart in the right place. The more we spend time getting to know him, the less time we spend with Tillie, and the film tries to have its cake and eat it by annoyingly playing the two off each other to generate ill-conceived tension. Niko’s shown as in control of his life, something that Tillie needs desperately; all we see of her is a party girl on her way to college who doesn’t stop drinking. And when she’s not drinking, she’s shivering in terror at the prospect of Marco coming up to finish her off. She doesn’t know Niko’s his brother, and he keeps her from knowing it while juggling his relationship with Marco. A mid-film twist having to do with Cantrell’s character might have the intention of cementing family themes, but it only serves to jump the level of histrionics up to unbearable tolerances. The film’s tagline, “Two loyalties. One choice,” may set us up for this film, but it doesn’t feel at all earned due to how extremely superficial this film stays. It doesn’t go deeper than a profession of love and an illogically-gifted puppy, and boy – that specific scene highlights the mind-boggling inanity of this script.

And it’s not like the actors seem to be trying to elevate this film, and this is where we have to assess Bartkowiak, editor Cody Miller, and their collective errors. Their shot and performance choices seem to come from a “let’s get it done” kind of place, not from “let’s make this the best we can.” James Remar has had a massive career with many films where he shines, but the direction given simply doesn’t allow him to deliver his lines with authority and authenticity. The result? A hammy FBI agent who comes off as positively Shatnerian, nowhere near the level of Remar’s capabilities,. The same goes for the other actors, who overplay every line they’re given, putting weight on inconsequential dialogue instead of giving that power to heavier moments. 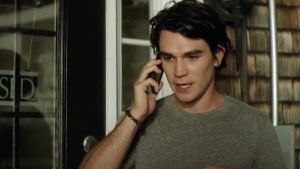 Dead Reckoning is supposedly inspired by the 2013 Boston Marathon bombing, but boats, bombs, and brothers are as far as it goes. The film’s themes of brotherhood, friendship, and loyalty mean nothing – everyone and everything in this movie are merely means to an end. To Tillie, Niko’s an escape. To Niko, Tillie represents a better life. To Marco, Niko’s just a helping hand. And once the film wraps up, the final shot of Tillie amid a voiceover leaves a bad taste in the mouth, as she hasn’t conquered anything – she’s just a girl in the right place at the right time. Painting itself as “USA good, terrorism bad” with such thin veneers is an insult, and Tillie’s overblown, misbegotten personal triumph seems more jingoistic than sincere. That’s exactly what Dead Reckoning boils down to – a film with zero nuance which relishes in the overt, constantly condescending to the audience instead of being intelligent.

Not Rated by the MPAA (contains violence, language, drinking and drug use involving teens, and terrible acting – equivalent to a light R or a heavy PG-13). Running time: 91 minutes. Released by Shout! Studios.
Posted in Movie Reviews