Posted by Eddie Pasa on October 22, 2020 in Movie Reviews / No Comments

It pains me to no end that writing/directing duo Aaron Moorhead and Justin Benson aren’t more well-known throughout the cinematic landscape. Their films are massively creative and imaginative, defying low budgets, limited locations, or a perceived lack of big-name stars. From Resolution to Spring to The Endless (with a stopover in the anthology film V/H/S: Viral), their stories are fascinating and involving, willing to be a way more cerebral mix of confusion and clarity than one would expect. 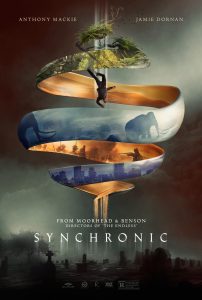 They bring this welcome sensibility to their latest film Synchronic, a tale of hope amid doom and death. It’s a little more straightforward than either Resolution or The Endless (both of which take place in the same universe), but all three of these films feature a common thread of time being an enemy itself, an aspect which, in a recent interview*, Moorhead acknowledges is “absolutely terrifying, y’know? It’s the immovable force that you can’t struggle against at all. There’s no one strong enough… and if we’re making horror movies about things that scare us, there’s the inevitability of the fact that you’re going to march along… and everything you love will go away.”

Synchronic leads us in this direction, 180° away from The Endless where time loops imprison their inhabitants. Here, life is all too short and violent, seen through the eyes of Steve (Anthony Mackie) and his longtime best friend Dennis (Jamie Dornan), both working as EMTs in New Orleans. Their first call sees them handle both a gruesome stabbing and a heroin overdose; much of their friendship is established in an engaging long take which revolves around the rooms in which these victims lie while Steve and Dennis attend to them. There’s a professionalism that allows them to compartmentalize the seriousness of the scene without losing their affinity for each other, but a certain tension is laid on thick when Steve is accidentally stuck with a stray needle.

A cautionary blood workup eventually reveals unexpected and horrible news: Steve’s got a brain tumor which the doctors predict will kill him anywhere between six days to six months. Meanwhile, more bodies keep piling up, a result of the titular Synchronic – a DMT synthetic which remains legal because of the difference of a few molecules. Even more bad news comes when Dennis’ daughter Brianna (Ally Ioannides) disappears, a discarded Synchronic wrapper bearing the only evidence of what might have happened to her. As Dennis and Tara’s (Katie Aselton) marriage crumbles under the weight of Brianna’s absence, Steve – using the time he has left – investigates the astounding, reality-warping effects of this drug and how he can use it to get Brianna back.

Part adventure, part science-fiction, and part drama adding up to a film full of humanity, Synchronic functions a lot like Moorhead and Benson’s other films in that it espouses empathy for the victims, even after our biases paint each character in familiar tones. As they did in The Endless, Moorhead and Benson might start off with easily-identifiable exposition, but they have a patented way of drilling down past the superficial which beguiles and roots the audience, allowing them to fully stand beside each character as they wander into the unknown. It’s as if we’re seated in front of a carnival caricature artist who exaggerates our features, then adds minute details to draw us further past the picture and into a deeper, winding story which demands our rapt attention.

Steve may initially come off as a jaded medic who’s all about womanizing and partying; as these layers fall away due to his impending fate, we see a more serious, methodical side of him which will stop at nothing to find the truth. Anthony Mackie fills Steve’s soul with an appropriate, worn gravitas combined with the kind of spirit found in a kid eager to find out what he’s got on Christmas morning. Through all of Steve’s experiments leading to the rules by which Synchronic operates, Mackie makes us believe in what’s happening to him, having the ability to propel us through these impossible events by being simply… human.

In the aforementioned interview, Moorhead states of the other side of marching through life: “You still have all of that time, and the way that you spend it can be very beautiful.” Synchronic is an examination of how one person chooses to spend his remaining days; even in the face of certain death, he still makes the choice to explore and help his best friend, devoting his energy and smarts to solving this harrowing riddle and making his what’s left of his life count in immeasurable and eye-popping ways. If I’m being vague about how Synchronic operates – both as a film and the fictional drug – it’s because there are delights best left untold. This is one of the many reasons why the names Justin Benson and Aaron Moorhead will always be a draw to me, as there’s always so much more to discover when viewing their films.

Both of these credited writers/directors also carry more credits in the film – cinematography, editing, and visual effects among them – which allow them to tell their story, not another person’s version of it. Their vision is uncompromised and full, shouting with a quiet audacity that there’s more to life than what we see. All of their works operate just a little outside of “normal,” be it through shifts in dimensions, Lovecraftian intrigue, or seemingly plain scenarios with an inexplicable, powerful force behind them. This slight step off into uncharted territory is the draw behind their films, and to date, they’ve never failed to back it up with a satisfying completeness and thoroughness which escapes even the most gifted of filmmakers. Synchronic is one of the best films of the year, another example of their brilliant storytelling prowess bolstered by a beyond-intriguing premise and subtly amazing skills on both sides of the camera.

* I was honored to sit down with Aaron Moorhead and Justin Benson for a fifteen-minute interview, to be posted in full at a later date.

MPA Rating: R for drug content and language throughout, and for some violent/bloody images. Running time: 103 minutes. Released by Well Go USA.
Posted in Movie Reviews