Posted by Eddie Pasa on September 10, 2020 in Movie Reviews / No Comments 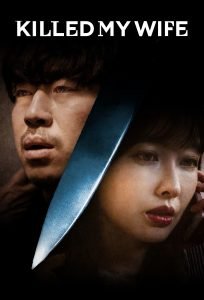 Quite honestly, Killed My Wife comes off as a more serious, darker version of Dude, Where’s My Car? with a good dose of Memento thrown in the mix. It’s a film which, thanks to the unreliable memory of its lead character, grows deeper and more engrossing by the minute. The sex-or-violence prologue and the title alone are what hook us into this story of a man who suddenly wakes up to a cop telling him his estranged wife is dead… and he’s got blood on his hands. This quick setup and the establishment of suspected murderer Jeong-ho’s (Lee Si-eon) horrible drinking problem are the only hints as to the unfolding conundrum which follows.

However, Jeong-ho’s personal investigation is only half of what makes Killed My Wife so engaging; it’s his character study which gives this movie its lift, not the action. The guns, knives, and what-have-you (bonus points if you know that reference) are just a consequence of pride going before a fall, and Jeong-ho falls hard. When we meet him, he’s no crazed lunatic or someone who needs his wife out of the way; he’s just a salaryman whose alcoholism and gambling addictions have gotten the better of him, and he’s been put in the worst of spots when Detective Choi Daeyon (Ahn Nae-sang) comes calling. 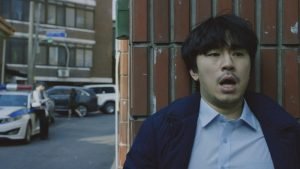 Likewise, Detective Choi has some burdens to bear as the old cop in a game best left to the youth. Although he wears a high rank, his juniors treat him with disdain, angering him with digs at his incompetence and advanced age. However, he has something to prove yet, his experience and perseverance coming to the fore while the younger men fumble about. Truth be told, we see him commit more than his fair share of stumbles, but mostly because the script demands that Jeong-ho slip through his grasp and stay one step ahead to keep the mystery unraveling.

Jeong-ho can only try to retrace his steps with help from his friends, bar servers, and store clerks to get to the bottom of what happened the night before. All kinds of characters come to play, whether it’s a former co-worker or detestable loan shark Mrs. Kim (Seo Ji-young) looking to reap body parts or even lives in lieu of payment. It’s worth paying attention to every character Jeong-ho comes across, which also has the effect of stifling any attempt to correctly guess who killed Jeong-ho’s wife, Mi-young (Wang Ji-hye). 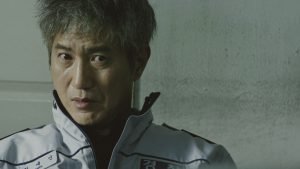 Surprisingly, Mi-young turns out to be the backbone of the whole story, meek appearance and demeanor be damned. She’s not some vicious, entitled woman who wants her husband to earn money; she only wants what’s good for them both, and there’s more to her story than we’re initially led to believe. Although the opening minutes reveal her dead in her Unnam apartment, we get to know her via flashbacks showing Jeong-ho hiding his unemployment from her to save face. However, she’s not written or performed as the vindictive type, her supportive nature clashing wildly with Jeong-ho’s deception and wayward endeavors.

The paths of these three individuals slowly intertwine as the simmering cauldron comes to a boil, but don’t expect any explosions at the end. Writer/director Kim Ha-ra knows better than to go for a bang of a conclusion; instead, he brings us down in a most peculiar fashion, silently leaving the final facts of the case to resonate with an eerie presence rather than directly pound our senses. This reveal is designed to hurt more than any graphic depiction of the night’s events possibly could, and it does so with a shockingly muted power. 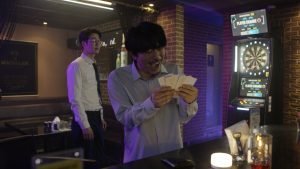 The earlier comparison to Dude, Where’s My Car? should only serve as an introduction to what to expect from this movie, in that an unseen night of debauchery leads to a morning full of consequences which have to be sorted out immediately. Make no mistake – this is no funboy stoner movie. This is a suspenseful examination of what drives a man to lie, cheat, steal, and possibly murder due to the societal pressure to maintain a façade of normalcy and stature. Killed My Wife is even more compelling due to its use of a fundamentally flawed, nondescript main character – not an action hero stereotype or some strutting rich man with everything at his disposal. The film makes its home in the real and tangible struggles of the working class and becomes an elegiac thriller which keeps us guessing to the very end.