Posted by Eddie Pasa on August 19, 2020 in Movie Reviews / No Comments

Nothing says “down and dirty” like The Prey, a ruthless and taut grindhouse adaptation of Richard Connell’s 1924 short story, “The Most Dangerous Game.” The film gets straight into the hows and whys of humans being hunted for sport, unlike the more famous of the two early ‘90s filmed adaptations, Hard Target (the other being 1994’s Surviving the Game) which took its time getting there. Amid the opening credits, we start by getting the sense of disposable life in a Cambodian city which soon transitions to how quickly throwaway humans become in the local prison, followed immediately by the beginning of this harrowing battle for survival. 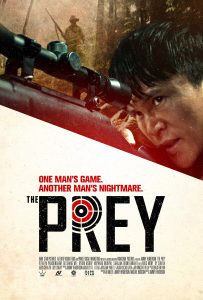 Similar to the other two aforementioned films, our heroic antagonist Xin (Gu Shangwei) is not your ordinary citizen; he’s an undercover Beijing cop on a totally different assignment when he gets swept up in a police raid. It’s during his short stint in lockup where he’s farmed out to three well-paying psychopaths fully intent on getting away with murder. The corrupt warden and his staff provide full transportation and logistical support, in addition to turning a large group of people no one will miss into live-fire targets. “I locked them up. I brought in the worst of them. All I did… was give society the privilege of paying the fuckers back,” the warden (Vithaya Pansringarm) says as a way of excusing his reprehensible behavior.

By describing Xin as the antagonist, it’s meant in the same way John McClane is to Hans Gruber and his gang in Die Hard; he’s trying to get in the way of the villains’ plans being successful. However, he’s not the type to toss off one-liners before efficiently dispatching his pursuers; he’s simply a man caught in a murderous contest for his life, willing to do what it takes to get to the next minute, hour, or sunrise. It’s a feeling to which director/co-writer Jimmy Henderson adheres throughout, allowing us to get lost in the directionless forest, keeping us anchored solely to the game and its participants. Geography doesn’t matter; it’s the urgent task each man has set before him which drives this sparsely-scripted peril-fest. 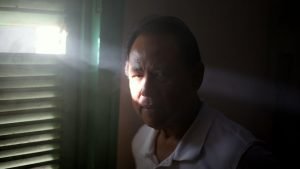 Opposite Xin are big-game hunter Payak (Sahajak Boonthanakit), smooth-talking heel Mat (Byron Bishop), and his nephew Ti (Nophand Boonyai). Payak’s easy to understand – he dresses, arms himself, and acts like someone going on an elephant hunt, engaged with the juice of murdering humans but foolishly disregarding the danger when someone he deems inferior shoots back. Ti’s the mentally-unhinged loose cannon, disrespectful to everyone and flaunting his wealth, be it through his money, his car, the way he treats those he considers lesser than him, or his choice of high-powered weapons. When we Steadicam around his cherry-red Ferrari, we almost expect him to emerge with a long coat flying about him like he was in a John Woo movie. There’s an undertone of tension between him and his uncle, barely kept in check until late in the movie when Mat – who’s had the most control over himself, the other hunters, and the situation that anyone could possibly have – unburdens himself of this baggage.

A theme this film embraces is the turning of man into animal; the warden says as much when trying to break Xin after he arrives in prison. Over the course of The Prey, we see Xin struggling to stay human while the true animals hunt him for pleasure. There’s the big “Look what you are now!” moment which tends to throw us out of the movie, but it’s redeemed by the final shot, a dolly-zoom (also known as the “Vertigo shot”) which carefully fades into cinematographer Lucas Gath’s similarly-paced opening shot, providing bookends for this tight package of suspense and terror. 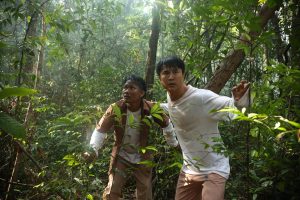 Henderson dispenses with any kind of humor, no matter how much we might beg for a respite from the utterly cold, utilitarian manner he displays in executing his action. The Prey is a very WYSIWIG film, unadorned by the rote and typical embellishments which might provide welcome distractions from the horrors on screen. Instead, we’re given a film which leaves us considering the cruelty and consequences of mayhem and brutality, and how dehumanization leads to swift retribution. The film’s lack of geographic orientation levels the playing field to a certain extent, especially when Xin and his running buddy Mony (Rous Mony) gain the upper hand and meet fire with fire. But it seems all who enter the jungle lose something, whether it’s their lives or their souls, and it’s thrilling to watch Xin fight to keep both.