Posted by Eddie Pasa on August 6, 2020 in Movie Reviews / No Comments

Plenty are the films about the comedy of errors that is parenthood and subsequent family life, but what about those whose paths and choices have taken them a different route? Where are the movies about the single folks who, either by choice or by circumstance, don’t get married or have children? If there are stories like this, they’re either action-oriented (think James Bond), stories about widows/widowers, or they make the single person a pathetic headcase (think Will Ferrell’s cameo in Wedding Crashers). Spinster – a pejorative term for a single female past societally-optimal marriage or child-bearing age – takes this notion straight on, its humor and spirit matching the ever-wry tones of its lead actor, Chelsea Peretti. 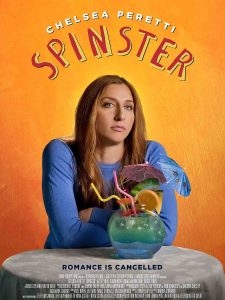 If you’re like me, you know her most as Gina Linetti from NBC’s “Brooklyn Nine-Nine,” a role which alternately made you want to hug her or shove her away with how likable or annoying she could be. This is a large part of her comedic shtick, using her sarcastic front as a shield to deflect how much any given remark or situation might hurt her feelings. Precious are the moments when she drops it and we see her as a sincere person dealing with what’s in front of her; thankfully, Spinster writer Jennifer Deyell and director Andrea Dorfman know how to play to Peretti’s sensibilities, balancing her barbs and vulnerabilities well in her character, Gaby.

We’re surprised by a prologue turn of events which sees Gaby smack down a bride-to-be’s notions of fairytale love (thus losing her as a potential catering customer) followed by her bewildered boyfriend Nathan (Eugene Sampang) running out of his own apartment to break up with her. She pivots almost 180° from denying romance to going full-on stage-five clinger as she tries to stop Nathan from leaving. So begins Gaby’s introspection, deciding whether or not she wants love, a family, or to live life the way she wants to, societal pressures and “rules” be damned. 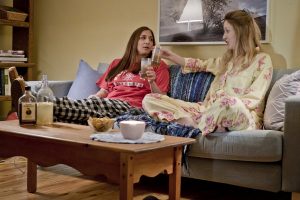 Deyell’s script sometimes gets a little heavy-handed when mothers and fathers start coming after her for not having a family or getting married, calling her selfish and all manner of thinly-veiled insults. At times like this, I think of one of my former co-workers who never had children with her husband; I never thought less of her, and I wonder why people would think negatively about decisions like hers. After all, it’s no one else’s business, so why do people get so miffed and take it as a personal affront when someone doesn’t have kids?

Furthermore, why are we pressured to marry and start families? Is it some old holdover from when marriage was more of a means of maintaining status or rising above one’s station? Have we rationalized it as a result of being in love and wanting to spend the rest of our lives with someone else? Is it so that when we get old, we’ll have someone to take care of us? All of these reasons are pretty selfish as well, when you think about it. The script is heavy-handed because it needs to be, making its statement boldly to disabuse this way of thinking. 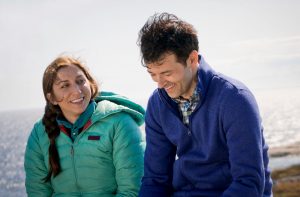 Spinster deals directly with Gaby trying to get herself together while battling this societal demand, putting her in a position to take reproach from all sides, external and internal. The old adage “you can’t love someone else if you don’t love yourself first” has caught up with her, and she has to balance so many different roles before truly becoming comfortable with herself. Daughter to Jack (Bill Carr), sister to Amanda (Susan Kent) and Alex (David Rossetti), supercool aunt to Adele (Nadia Tonen), neighbor to Callie (Kate Lynch), catering company owner, potential restaurateur, and dog-owner – Gaby’s got a lot of hats to wear. Dorfman and Deyell root us in her growth as a mature woman, and it’s lovely to see Gaby shaking off pointed comments and odd love interests in search of getting herself to a good place.

For the first time in a long time, an older single woman is not painted as the cautionary tale or the cat-loving weirdo down the block who creeps every little kid out. Gaby’s just someone trying to get to a happy middle, comfortable with herself and her life before being in any kind of place to allow someone else in. Written and directed by a female squad (and looking at the credits, it seems like the cast and crew sit about 50/50 as far as gender representation), the utterly delightful Spinster is a welcome perspective on single life extending beyond when it’s “supposed” to end, shedding rules and roles of old to fully allow Gaby to grow into who she is meant to be.

Not Rated by the MPA (contains language and adult situations – equivalent to an easygoing R). Running time: 87 minutes. Released by Vertical Entertainment.
Posted in Movie Reviews