Yes, God, Yes felt like a revisit to high school. Rumors, budding sexuality, the intolerance concealed by a thin veil of gentility, and the judgment we cast on others to make us feel better about ourselves… yup. I grew up Catholic; Yes, God, Yes was like dropping in on a friend and then finding yourself saying, “Oh, yeah – there are the reasons why I couldn’t stand you in the first place!” while backing slowly away from them in order to see what kind of carnage happens as you leave. 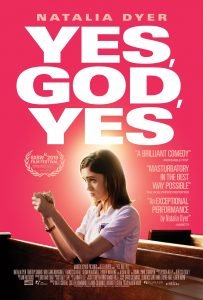 Writer/director Karen Maine seems to have gone through the same struggles I did growing up, finding that the high horses we sit upon only make everyone and everything look like an ant by comparison. And we eventually (hopefully!) learn this is no way to go through life, having to live up to standards set by others who ostracize you at the first sign of weakness or doubt. There’s no room for mistakes in cultures like the one satirized in the film, yet we are human and make mistakes every day.

This impossible ideal of infallibility automatically colors our view of Alice’s (Natalia Dyer) awakening, both in sexuality and as a young adult realizing hypocrisy inherent in her daily and religious lives. She’s the target of a vicious rumor stemming from an innocuous meeting at a party, causing everyone – from her best friend Laura (Francesca Reale) to the school disciplinarian to Father Murphy (Timothy Simons) – to nail her with their incorrect and misguided contempt. To try to combat this, she goes on a four-day retreat dubbed “Kirkos” – a reference to “Kairos,” the official title of these kinds of high school retreats, the Greek word’s original meaning altered to represent “The Time of the Lord.” 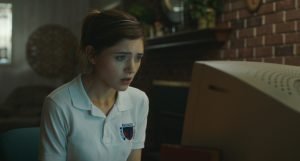 This retreat has several things in common with two similar retreats I went on in high school. The sharing of highly personal life stories, letters from loved ones aiming to push us emotionally, hugs and platitudes of love which meant nothing once back in the world, and the “Live the 4th!” phrase reminding us to extend the teachings and spirit of the retreat past its conclusion. Quite honestly and truthfully, no high schooler (especially in the early ‘00s, this film’s setting) could ever hope to live up to these rigid expectations adults and religion put upon them; it’s made all the worse by our own age peers who push the boundaries and wind up getting a little of it on us.

Alice is in a tough spot. She’s been labeled as a tramp due to these allegations which seem to grow more fantastical with every retelling, and now she’s stuck on a retreat with the very people who’ve made her life hell. Worse, she’s just discovering her own body and its pleasure centers, trying to reconcile this with the faith in which she’s been raised. But Yes, God, Yes is not just about her own journey; it’s also realizing that the high-and-mighty are just as vulnerable and human as we are, except for the belief that the appearance of “good” seems more important than actually being good.

Natalia Dyer is a precious gem as Alice, able to emote the confusion of the teenage soul with a subtle and gentle power. Aided by Maine’s wondrously human script and direction, Dyer intelligently guides us through the uncertainties of Catholic high school which only results in one certainty: no one’s perfect and we don’t need to add bullshit to what’s already happening to us. But we act like we’re perfect and we sling copious amounts of bullshit everywhere as teenagers, all the while not knowing the first thing about our own selves. As she becomes the object of the school’s stink-eyed glances, Dyer pulls us right into Alice’s head and makes it easy for us to believe and experience the tumult of high school all over again. 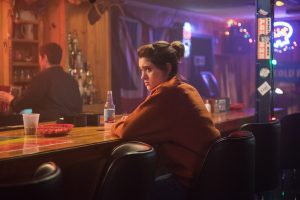 Another place Maine succeeds is in not making a mockery of the church itself, but rather the people who claim to be most profound in their faith. You know, the ones who project their own struggles on you and expect you to feel bad for it. She also finds the good hearts in some people, especially when it’s most needed at this stage in life. Even though the film’s – ahem – touchy subject matter is sure to make for uncomfortable feelings while viewing, Maine casts an empathetic eye toward remembering how we felt back then and how we got through it. Yes, God, Yes is not just a comedic look at moral hypocrisy; it’s a plea for being human amid the awkwardness from which we were allowed to grow and then prosper. Life gives us chances to make ourselves better; the film only asks that we do the same for each other.

MPAA Rating: R for sexual content and some nudity. Running time: 78 minutes. Released by Vertical Entertainment. At drive-ins and in select virtual cinemas 7/24; on VOD 7/28.
Posted in Movie Reviews