Forget the title; We Are Little Zombies (Japanese title: Wî â Ritoru Zonbîzu) is not a horror movie… at least in the conventional sense. Those expecting sloppy gore effects and masticating brains would do well to find their joy somewhere else, but for your sake, don’t turn that dial just yet. There’s more to this movie than one would expect, being a dark treatise on processing grief and a childishly focused response to losing their parents in awful ways. 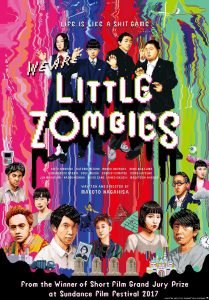 We Are Little Zombies is a true zinger, one of those movies with a surprise, punchline, or payoff behind every beat. It’s a hyperkinetic, attention-shredding sugar-rush of a film, the clothing of the excessively happy covering a bruised and bleeding body. This film pulls at every opposite of you until you’re in the middle, but not by relaxing; you’re there because you’re teetering on a steel wire wound up to its maximum tension and you’re frightened of which way it’ll pull when it snaps.

All this for a movie about four suddenly-orphaned preteens? Yup. This Japanese production pops and boils at the rate of their style of gameshows, where bells are going off at random, there’s a lot of rapid-fire talk, the show’s subject is suddenly subjected to some kind of physical challenge, and then it’s over and we’ve moved onto the next contestant. This is how we’re introduced to Hikari (Keita Ninomiya), Takemura (Mondo Okumura), Ishi (Satoshi Mizuno), and Ikuko (Sena Nakajima), the aforementioned group who meet outside the funeral home and crematorium, watching the smoke rise as their parents turn to dust. 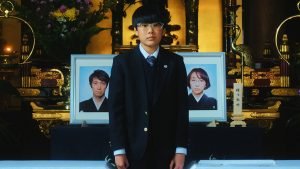 If that kind of bluntness throws you for a loop, I’ll let you in on something: that was pretty much a quote directly from the opening minutes. “Today, Mommy turned to dust. So did Daddy,” Hikari narrates in a deadpan voice. No emotion, no fire; just flat-out fact with a tone to match. Hikari doesn’t really care about how he’s watching the cloud streaming from the crematorium chimney or why it’s doing so; he’s there because it’s expected of him, and this is just some new thing new to see beyond being bullied at school, having no friends, funeral rituals, and the handheld video game to which he stays glued the entire way through the movie. With all the speed of how we’re caught up with all the various Spider-Man incarnations in Spider-Man: Into the Spider-Verse, we’re given the reason why he acts the way he does, mostly as a result of parental neglect.

With similar abandon are we thrust into the lives of the other three, all bearing the same scars numbing them to feelings allowing them to grieve in a more traditional way. It’s like there’s one tumbler out of place preventing a lock from opening the door leading to emotion. Each cannot bring him or herself to show any sign that they cared about their parents, and they all have their reasons. Ishi’s parents were restaurant owners and operators, so he’s lost his sense of taste; also, just before his parents’ death, his dad admitted he only stayed with his mom because he got her pregnant. Takemura’s become a kleptomaniac because, as he says, “The more I steal, the less I have; everything that matters to me disappears.” And Ikoku… she’s got her own reasons not to mourn her parents, which is shockingly revealed toward the middle of the movie. 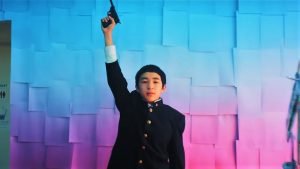 They’re not sociopaths or anything (well, there might be one in the mix); they just feel the world has taken some part of them, and they’re not expressing it through emotion. After getting inspiration from a band made of homeless garbage dwellers, they form a band named after Hikari’s handheld game: We Are Little Zombies. They become an overnight sensation when their self-produced, eponymous music video goes viral, its 8-bit keyboard-driven pop instrumentation backing lyrics which talk of their indifference to their respective loss, a characteristic which pegs them as zombies in their own mind.

Half the fun is not in these quick-punch introductions, but in how they spend their days and nights running through the city. Writer/director Makoto Nagahisa styles this as a video game, with objectives to reach as each child’s story is told. Old-school video game music, graphics, and cutscenes dot these quests, their personal value to the group being revealed as the prize for beating each subsequent level. Each of these skills translates in some fashion, either as a result of or in contradiction to the circumstances of their loss. A similar “of course, it could only wind up like this” kind of spirit is the touchstone for this entire film, becoming an odd sort of character in and of itself. 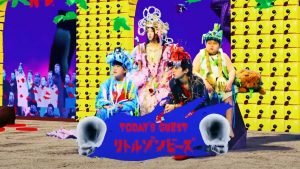 Scott Pilgrim vs. The World shares a similar filmed video game kind of vibe, but Makoto takes it a step further, dispensing with any kind of distraction or sidequest. The kids never stop moving, quickly jumping into each next stage; they gain whatever power-up, special item, or knowledge before leveling up and moving to the next world, one step closer on their way to beat the “End of Level Boss,” as one person puts it. Sure, Bryan Lee O’Malley’s original “Scott Pilgrim” comic and Edgar Wright’s adaptation of it did this as well, but We Are Little Zombies turns almost 180° from Scott Pilgrim’s messages of love into a space where the only thing that matters is their own selves. It’s not a narcissistic or self-important kind of thing; they’re only a group because they met each other where their parents were cremated, and it’s in this lack of affinity and the resulting friction (or lack thereof) where we find the most delights.

It’s an off-beat movie like you’ve never seen, the children mourning the break in routine and enjoying their sudden freedom in a grin-worthy, by turns mature and immature manner. All the actors are exceptionally good at deadpan delivery, making their disaffected lives seem unfortunately lived-in and dulled by constant disappointment in their elders. Makoto knows when to batter us senseless with information and visuals, his quick-edit choices intervening to move flat-toned conversations along, but he also knows when to stand aside and let an unbroken shot do the talking. The entire “We Are Little Zombies” video is shot (on an iPhone!) and shown in one take, as are several key scenes highlighting the lack of warmth or love in their lives. 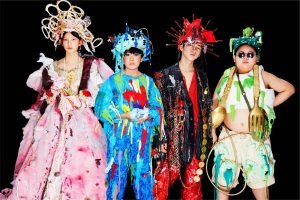 “Surreal” doesn’t even begin to cut it – We Are Little Zombies is a breakneck ride through the psyches of four kids who don’t know how to process their feelings. All of them suffered from abuse in some form or another, whether physical or mental; how would we expect them to react to the loss of their tormentors, whether violent or not? That it goes against any kind of grain is why it’s easy to fall in love with We Are Little Zombies, its markedly antisocial, misanthropic style running side-by-side with a punky, just-do-it attitude. It’s a wild piece of art, a broodingly dark comedy dressed up in the brightest Nintendo colors and a hold-on-for-dear-life pace to match.

Not Rated by the MPA (contains references to death and suicide, and very few instances of foul language – equivalent to a PG/PG-13). In Japanese with English subtitles. Contains a post-credits scene. Running time: 121 minutes. Released by Oscilloscope Laboratories.
Posted in Movie Reviews