The way The Tent operates is in confusion until its final reveal. A recent parallel would be M. Night Shyamalan’s Split, a similar movie swiftly redefined in its post-closing title twist, but Split at least didn’t keep you in the dark about its aims or its subject matter. With The Tent, we’re kept on a maddening hook to find out what’s pushed its two lead characters into danger. 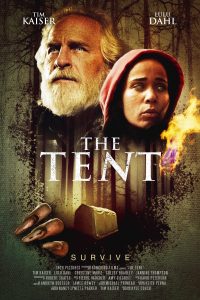 Nothing about the main body of this film makes sense. A disaster of some kind happens when David (Tim Kaiser) is driving his truck down a lonely road, and he’s forced to hide out in a tent and live off the land, isolated from any kind of society. Growling, unseen creatures (whose POV looks like that of the werewolves from Neil Marshall’s Dog Soldiers) roam the forests at night, threatening to take his supplies and attempting to lure him away from the safety of his camp. He has a peculiar attachment to a few of his belongings, especially his pocketknife with the name “Jesse” on it, which he treats like more of a talisman than an implement.

Oddly, we don’t know his name is David until sudden interloper Mary (Lulu Dahl) comes to rescue him from one of his bear traps. Funny thing, though – she uses his name, but he never introduces himself to her. Paying the utmost attention to his words, her concern for his well-being (or is it a trap?), his rules, and routines will start to paint a bigger picture, and we also start to wonder if this is might be a metaphor for something completely different. For the final fifteen minutes or so, the truth of David and Mary’s situation is laid bare, moving from suspense to a sorrowful exposition which makes us recontextualize everything which has come before. 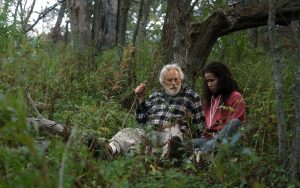 Thanks to a closing dedication, we can see writer/director Kyle Couch (who also has a role in David’s flashbacks) is coming from a deeply personal place. He makes the film wear its heart on its sleeve like few others, using sly visual and dialogue cues to tie everything together and to lift the blinders from our eyes. For instance, David tells us about his trapping methods, using a small trap to catch a smaller animal which he uses to escalate his enticement of larger animals he can catch. With this and other disclosures to Mary we start to zero in on what the film wants to say, culminating in its emotional reveal.

Another tactic Couch uses to simultaneously draw us in and alienate us is in the film’s two lead performances. At first glance, both Kaiser and Dahl seem to be out of their depth and miscast, their acting and delivery coming off amateurish and stilted. However, as the film proceeds and its secrets are revealed, the purposefulness of Kaiser and Dahl’s seemingly naïve work adds to the film’s deceptive nature, ultimately yielding to its final statement. This film relies on our biases working against our perceptions, a startling characteristic Couch uses to maximum effect. 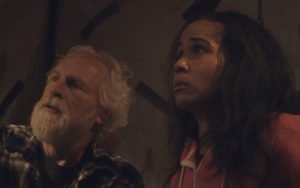 The Tent has all the visuals and atmosphere of a microbudget survival horror film, but we’re not given to know the extent of the kind of horror Couch has in store for us until the last frame rolls. It hits us in places we might not have expected, and there are uncomfortable truths revealed which will undoubtedly affect some more than others. There are no survivors in The Tent; there is only the degree of damage which irreparably shapes each life we encounter. A film I recently reviewed handled similar subject matter with a more artful style; here, Couch takes a minimalist, guerilla approach to a sadly universal phenomenon, writing a touching open letter to loved ones lost.

Not Rated by the MPA (minimal scenes of terror and light gore, but otherwise contains nothing objectionable – equivalent to PG/PG-13). Sound effects from the film play at end of credits. Running time: 85 minutes. Released by Gravitas Ventures.
Posted in Movie Reviews