Posted by Eddie Pasa on July 9, 2020 in Movie Reviews / No Comments

I’m not quite sure what I was expecting from Relic, but I definitely didn’t expect to see an exceptionally powerful, humanity-driven horror story… and yet, here we are, lured in by the promise of a good, spooky possession story. But director/co-writer Natalie Erika James takes our expectations and the normal trappings of a haunted house/evil spirit film and turns them inside-out while adding a superb dose of body horror. But it’s not the kind of David Cronenberg or David Lynch kind of corporeal manifestation of society’s ills; it’s something a little closer to home. 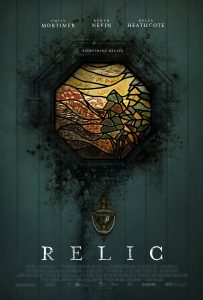 It starts with the prologue, featuring an overflowing bathtub and the elderly Edna (Robyn Nevin) wandering around her house in only a blanket, turning her head toward something coming up behind her. When she suddenly disappears, her daughter Kay (Emily Mortimer) and Kay’s daughter Sam (Bella Heathcote) travel to the countryside to join the search parties combing the vast woods surrounding Edna’s house. It’s a lovely yet remote house, lying secluded in what seems to be the middle of a forest. We’re told Edna forgets things at times, and we wonder how exactly safe can she be all alone like this when it seems like her memory’s slipping? Only when looking closer can anyone see anything’s wrong; brand-new locks are on the doors, and black mold has pervaded the structure.

Kay and Sam clean the place up as much as possible, only for Edna’s surprise return to throw everything further askew. Not only is she bearing cuts and bruises, she’s also got an oversized black patch covering her upper chest. She barely seems to know where she is at times, much less who her own daughter and granddaughter are. All around the house are Post-It notes with instructions for the mundane (tasks like setting the alarm, shutting off the water, etc.) and the mysterious (“Do not follow it,” “This is where he came in”). A presence is sensed throughout the house, punctuated by Kay’s dreams of a cabin and an old man rotting away inside. 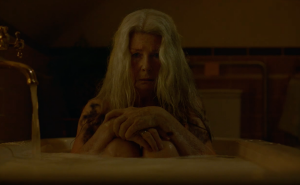 Not only does Kay have to wrestle with her mother’s condition, she also has to grapple with possibly sending her to a nursing home where she’ll be monitored and cared for more closely. Sam thinks her grandma’s pretty cool and tries to offer a different tactic: moving in with her and being her caretaker. But she starts to think twice when she hears stories of a neighbor kid no longer allowed inside Edna’s house, and she also sees she might be out of her depth with Edna herself, going from doted-on granddaughter to Edna viciously attacking her within minutes.

We want to believe the horror Natalie Erika James and co-writer Christian White have whipped up for us is of the supernatural kind, something or someone that’ll go away with the right words or holy water or some ritual we’re used to seeing. But Relic’s unyielding terror derives from the true horror of watching our loved ones slip away gradually, turning into people would barely recognize were it not for their physical features which have defined them to us. The mold, the seemingly perfect-looking house, the hidden hallways Sam finds while she’s looking around – these are all representative of onset of Edna’s dementia. 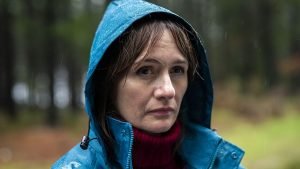 Thanks to a brilliant cast and James’ sure and steady direction, we’re wrapped up in thinking it’s just another scary movie until the final scene plays out with its ultimately damning truth. Signs of Edna’s condition are evident from the very beginning; James and White’s take on the subject matter pushes it into a more identifiable frame and compounds the dread of uncertainty with visuals which bring out the monster this disease truly is. More unnerving are Sam’s final realizations right before the film’s last frame which shows the mold of the house growing over a beautiful stained-glass window, a metaphor for how a beautiful life can be overpowered from within.

Cinematographer Charlie Sarroff highlights the dark spaces where we think something’s waiting to jump out at one or more of the three featured players. The film immerses us in this darkness, living in the bleakness of Relic’s unescapable subject matter. No matter how much James inserts light or hope into the film via the script, Bella Heathcote’s performance, scenes of daylight, or candles dotting a bathroom counter, it’s all eventually overshadowed by the inevitability of Edna’s illness. 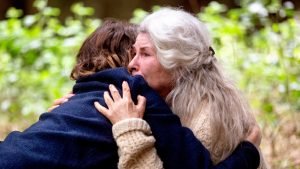 When the film’s flesh-and-blood monster is finally revealed, we think about what it has taken for Kay and her family to fight it, and what it will take to keep fighting it. Relic showcases us at our idealistic best and our pessimistic worst when it comes to trying to defeat what can’t be stopped. Natalie Erika James’ affecting directorial debut couldn’t have been stronger, tying us together with the film’s unconventional horror in its empathy and fear of the unknown. That it uses standard horror conventions to relay its symbolism is part of this film’s sneaky genius, helping its imparted truth violently smack us in the face a lot harder than we expect.