Most of the fun of time loop films is watching their victims go through Elisabeth Kübler-Ross’ five stages of grief – denial, anger, depression, bargaining, and acceptance. Almost every film like this shows alternately humorous and dramatic phases of a person coming to terms with their situation, and it’s usually limited to one person traversing their “new normal.” It gets even better when more people are involved, each on their own path with different methods, goals, and stressors which often conflict with the others involved. 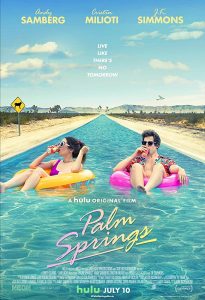 I love time loop films, whether the loop takes place over a series of vignettes (Groundhog Day, Predestination) or over the course of an entire film (Donnie Darko, The Endless). Without hesitance, I can say I loved Palm Springs, a film produced by The Lonely Island – y’know, the goof-rapping trio of Andy Samberg, Akiva Schaffer, and Jorma Taccone, the guys who brought us the classic Saturday Night Live Digital Shorts pop culture touchstones since the mid-‘00s. Samberg might be the only member seen in the film, but their elbow-to-the-ribs presence jabs you throughout every frame of the movie.

Time loops survive on the little details, some of which are best discovered on second or third viewings, and Palm Springs has a lot of them. A look, a whispered conversation, a bit of seemingly-inconsequential dialogue, boring and perfunctory sex – these aren’t just throwaway motions. There are motivations and methods constantly unfolding, and writer Andy Siara’s script keeps these surprises coming, hooking us into the next time Nyles (Samberg) wakes up to start all over again. Y’see, he’s caught in the day of a destination wedding in Palm Springs, CA, his loop beginning when he wakes up in the morning and coming to an end each time he loses consciousness. He retains every memory from every iteration of the day, whether he finishes it and falls asleep or is rudely interrupted by an arrow to the chest. 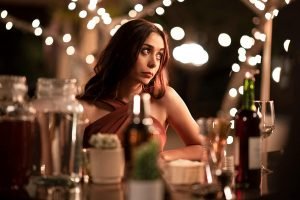 Palm Springs starts us off after he’s been there a while – we never know exactly how long, as some of his statements concerning “thousands” of sexual conquests might be taken as hyperbolic. But we’re given a window into how this came to be after a murder attempt which sees Sarah (Cristin Milioti), the bride’s ne’er-do-well sister, follow a wounded Nyles into an otherworldly-lit cave where they’re both sucked into whatever force is causing the loop. A more pronounced travel through the Kübler-Ross model powers this first half of the movie as Sarah tries everything to get unstuck, resorting to comedic suicide or trying to stay up beyond the day – the latter of which she achieves, only to find herself back at the start like Nyles. She eventually succumbs to Nyles’ hedonistic sloth, taking each day as an experience and a chance to try something different.

Siara gives a lot of action to Sarah and Nyles while furthering their own personal stories, creating their own legend and life together as they swan about the wedding location and surrounding area. Two revelations undo the swell friendship they forge over their time in the loop, and our gender biases are shocked to find that maybe Nyles isn’t the hero after all; maybe he’s too comfortable in the loop where everything’s predictable and safe. But will Sarah find her own way out of both the loop and a separate predicament affecting her? 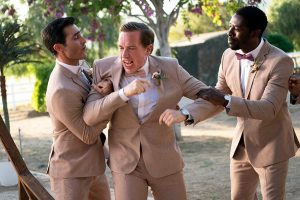 There’s a certain underdog, Adam Sandler-type feel which director Max Barbakow gives to Palm Springs – the fantastic fun and hijinks suddenly cut short by something disastrous, only for everything to come together again when it counts. However, he also makes sure never to get to Sandler-esque caricature and yuks, as each laugh or feeling is hard-earned with honest moments, not forced through superficial sight gags designed for cheap laughs. It’s an unexpectedly gorgeous-looking film, thanks to Quyen Tran’s sparkling photography showcasing the California desert in dazzling fashion, as well as highlighting and involving us in the deepening emotions between Sarah and Nyles.

These two leads are unbelievably affecting, owing a lot to how Milioti seems to bring out the best in Samberg. I’m happy Milioti – most known to American audiences as Tracy, the titular mother in CBS’ “How I Met Your Mother” – is breaking through to a wider audience, and I hope it lasts a long time. Her driving performance makes this film go, her wide-eyed wonder at the events impacting her being a reflection of how we as viewers feel throughout. She has an unmistakable charm which allows Sarah’s believable innocence – even after she tells Nyles she “fucks around and drinks too much” – to cover up a secret she’s hiding. Samberg responds by stepping outside his usual ignoramus-style bravado, inserting a more relaxed confidence resulting from practicing the day over and over. Nyles knows not even “getting it right” like Groundhog Day won’t stop what’s coming, so he leans into the skid with a justifiable air of “whatever” and knowing when to pull it back to allow Sarah into his heart. 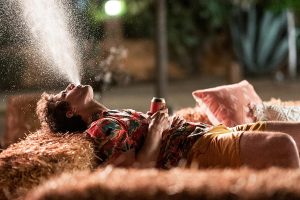 It is so unbelievable to think that Palm Springs might be one of the best of 2020? Nope. There’s a lot of heart and humor thrown everywhere in each episode of the loop thanks to Milioti, Samberg, and the script which binds them together. Of course, time loops are always fun to watch, but Palm Springs makes this time loop a rich, exciting adventure full of wit and warmth. Oh, and I forgot – there’s a murderer on the loose intent on making Nyles’ life hell… but even this part of the story has its own charms.