Posted by Eddie Pasa on July 3, 2020 in Movie Reviews / No Comments

There’s no question: Homewrecker is one of the most uncomfortable movies you’ll ever see. So much so, I had to watch parts of it through my peripheral vision. The thing is, nothing violent was happening during those scenes where I had to look away. It was an involuntary reaction to Precious Chong’s absolutely unhinged and insane performance as Linda, a woman who suddenly goes on the offensive against Michelle (Alex Essoe), whom Linda is seen glaring at in the film’s opening moments. 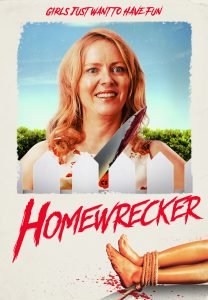 And it’s not just these heavy looks Linda throws her way; she also seems to be stalking her through various fitness classes until finally forcing her way into Michelle’s space. She jams herself into Michelle’s life at a coffee shop, although it could be said an earlier incident involving Michelle having an unexpected period might be a little more literal use of the phrase “she jams herself into Michelle’s life.” It’s here where we start to feel a fuller, deep-seated crazy coming off of Linda, insistent on pushing her way into Michelle’s world and taking the description “close talker” to a new level. With each subsequent two-shot, we see Linda edging further and further beyond Michelle’s personal barrier, forcing her to lean away from her computer screen and throwing her (and the shot aesthetic) off-balance.

Michelle’s established as a meek, kind, quiet person who puts up with this as best she can until she breaks one of the cardinal rules: “Never let them take you to a second location.” Linda wheedles her way into having Michelle visiting her house to engage Michelle’s professional opinion on the décor. To this point, we’ve seen Michelle going about her day with her fitness classes and her work, and we’ve seen her text her husband Robert (Kris Siddiqi) regarding Aunt Flo’s ill-timed visit. But we’ve seen nothing which warrants Linda’s almost-otherworldly intrusion upon her. Linda speaks as if no one’s listening, unchecked thoughts coming straight out of her mouth accompanied by weird pauses after Michelle speaks; it’s an intentionally stilted patter she bears, a reason for which is given later in the movie.

If you’re thinking, “Wait. I’m missing something here. What is going on?” Don’t worry, you haven’t missed anything yet. The screenplay, co-written by Chong, Essoe, and director Zach Gayne goes for the ultimate slow-roll, with things going from befuddling to slightly bad to bad to worse to HOLY HELL WHAT IS HAPPENING. After an agonizing getting-to-know-you ordeal involving a shattered glass and a Dirty Dancing-esque ‘80s movie, Michelle’s locked in a room, unconscious from a head injury; when she wakes up, she finds herself saying her unfiltered thoughts without being able to lie, eventually realizing she’s been drugged. Of course, there’s a reason why Linda’s doing all of this, but it’s relatively banal compared to exactly how it’s revealed and what we had to go through to get there.

Homewrecker rides more on the actors’ performances than any of the (appropriately) unpolished superficial action, such as Linda chasing an escaping Michelle throughout her house or attempts at bareknuckle fights. Conflicts like these are kept to a minimum in the hopes that we won’t be screaming “PICK UP A KNIFE AND STAB HER ALREADY!” or something similar at our screens. Instead, Chong’s delightfully diabolical performance lets us see the fantasy playing out in her head for real, and it’s unlike anything I think I’ve ever experienced. By contrast, Essoe wisely steps back and plays into her fear of the situation, looking for any kind of angle that will lead her to freedom.

Through color-saturated, dream-like inserts (which get explained later), Doug Martsch’s whammy-barred guitar strums, Chong and Essoe’s characterizations, and the screenplay itself, Zach Gayne gives Homewrecker an almost David Lynch-ian feel and lets us know immediately to prepare for the decidedly abnormal. Even the final shot into the title screen leaves a bit of amazement in our mouths, as we question which character earns the title “homewrecker.” There also seems to be a layer of metaphor regarding conquered people, with damage and injury going unnoticed with blissful ignorance until brought vividly into the oppressor’s face. Either way, Chong, Essoe, and Gayne push a typical wronged-woman story into the extreme, well outside the realm of reason and into a territory which looks and feels recognizable but has turned uncompromisingly distasteful and deadly to experience.