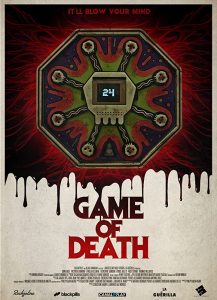 One cinema positive of the COVID-19 pandemic is that lesser-known films have come to the public’s attention; some of these lesser-knowns should have stayed that way. Case in point: filmed in 2017, Game of Death – not to be confused with Bruce Lee’s final film, another showing of this particular film’s lack of originality and simple willingness to just scrape the bottom – goes to great lengths to be nastily and violently subversive, but it’s only skin deep, which makes the film absolutely reprehensible.

Don’t get me wrong; there are films about violence and mass murder that I’ve come to accept as art or true satire. Henry: Portrait of a Serial Killer, Man Bites Dog, Natural Born Killers, and other such endeavors have proven nihilism to be a good source of dark comedy or social commentary. Here, Game of Death has no depth, no foundation upon which to expound on its down-and-dirty themes and actions. As it rolls its last frames, we’ve learned nothing except that if the kids from the story are representative of our future, we’re fucked with a capital F. Its dubious statements upon our own go-for-the-throat society, the absence of parents, the cycle of life, human stupidity, peer pressure, and nature vs. nurture might warrant a closer look, but those are unfortunately drowned in disgusting imagery, repulsive plot points, and a total lack of any kind of higher-brained intelligence.

Game of Death wants to shock and desensitize us, but it gives us nothing except a mounting pile of bodies (applause for some outstanding CGI and practical effects work) and a woefully zonkered raison d’etre. Films like Sam Raimi’s The Evil Dead (and its remake) have shown us the horrifying repercussions of doing something you simply shouldn’t do when you’re at a secluded cabin and you find a strange object. In this case, it’s the titular Game of Death, one of those electronic party games which requires you to do stupid things for points; here, the game forces 24 people to die in order for the players to stay alive, exacting gruesome punishment if they’re not actively trying to kill someone else.

What follows is driven largely by the most damaged and antisocial of the bunch, Tom (Samuel Earle), shown in the opening scene masturbating while glancing at a picture of his own sister and a gun on his bed. If co-writers/directors Sebastien Landry and Laurence Morais-Lagace’s intent is to immediately unsettle us, consider it a win; however, that’s only a hint as to the true abyss of his depravity, gradually uncovered by the day’s events. Once the timer on Game of Death starts ticking and an unfortunate victim’s head explodes into sloppy chunks seemingly of its own accord, Tom takes it upon himself to go on a murder spree to prevent him and his sister from falling victim to the game’s rules.

Sure, there are the voices of conscience and disbelief, but once Tom takes his gun out of his waistband and shoots a neighbor who comes to check on them after hearing their screaming, those voices are silenced as they play a real-life game of BioShock 2 or any of the later installments of Grand Theft Auto. The sociopathic Tom seems devoid of any kind of moral compass other than self-preservation, an instinct he preys upon in the others to make them commit despicable acts. Taking himself off the chess board to prevent further harm to innocents isn’t an option; he’ll go to any length to survive, even if it means annihilating an entire floor or two of hospital-bound palliative care patients.

Yup. You read that right. SICK. Gene Siskel derides the original Friday the 13th thusly: “There is nothing to Friday the 13th other than its sickening attack scenes; remove them and you’re left with an empty movie.” The same could be said about Game of Death, an abhorrent attempt at social commentary, delighting in overlong shots of carnage and necks that suddenly end at the chin. It also seems to take pleasure in trying to normalize the slaughter of innocents through depicting these events as video game animation.

Violence and gore don’t disturb me; in fact, Game of Death’s old-school special effects are one of this film’s positives. Also of note is the solid construction of this film’s visuals and set pieces, as is cinematographer Simon-Pierre Gingras’ ability to capture the Grand Guignol-ness of this insanity with an enveloping eye. The film doesn’t look anywhere near bad, a marked contrast to its plot points which lies somewhere between Drew Goddard’s The Cabin in the Woods (a stoner cautions against a group proceeding with rituals leading to their doom), Joe Johnston’s Jumanji (a game turns real), Kinji Fukusaku’s Battle Royale (kids must kill to stay alive), and Peter Jackson’s The Frighteners (which contains a similar hospital massacre).

Yet the violence and its underlying reasons are explored in those films, and they don’t rejoice or dwell in gore and death as their only driving purposes. Another big difference is the mean-spirited and ugly way the superficial Game of Death goes about delivering what the title promises: a game foolishly begun by idiots who read the instructions and knew what they were getting into from the start. Which also says something about me, seeing how I chose to watch this film to its post-credits scenes (which incorporate manatee footage so desperately inserted into the film as some kind of attempt to give it meaning). The only reason this film gets one star from me is due to competent filmmaking and good special effects.

Not Rated by the MPA (contains strong, bloody violence, a sexual situation, incest, and drug/alcohol use – equivalent to R). Post-credits scene, but why stick around for it? Running time: 73 minutes, thankfully. Released by Cleopatra Entertainment.
Posted in Movie Reviews