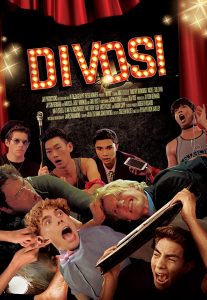 I had a double-feature of Game of Death and Divos! in this specific order… and boy, I’m happy I watched Divos! second. This was exactly the antidote I needed for the ugliness of the preceding movie. Divos! is a punchy charmer and rejoices in petty awkwardness, manically (or maniacally?) driven by its hero and narrator Ricky. Matt Steele, who also wrote the film, plays Ricky with the extreme motivation of those folks in high school who took the yearly plays way too seriously, their thing they can sink themselves into for ultimate expression.

People like this didn’t make my high school play experience hell, but I met quite a few from other schools which made Steele’s portrayal of Ricky accurate in any proportion. An aspiring Broadway hoofer, Ricky swans through every bit of life with a dreamer’s fervor and won’t let anything stop him, twisting every roadblock or negative into a stepping stone or an opportunity to work his particular brand of magic which ultimately benefits him. So when he’s suddenly paired with injured baseball star Josh (Timothy Brundidge) to share the lead role for How To Succeed In Business Without Really Trying, the flummoxed Ricky swiftly turns from agonizing over this decision to helping Josh – who’s never sang a day in his life – bring out his inner diva. (An explanation: the play runs for two performances, with Josh taking the lead opening night and Ricky taking the closing night.) 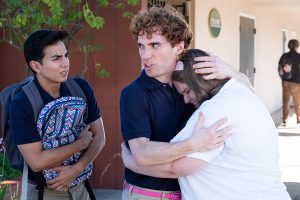 The friction grating at these polar opposites – a scrappy, uncloseted firecracker and a pretty-boy ballplayer – sets the stage for their strange relationship which sees Josh evolve from being a rookie performer to being a serious contender for the spotlight. Ricky feels he’s more than earned the lead, long suffering the slings and arrows of being a gay kid from the poor side of town in an affluent Catholic school. To see Josh – a rich kid who’s never had to fight for anything – step into a lead the very first time he tries out for the play is anathema to Ricky, but he’s willing to prep Josh as much as he can so he’ll be worth something on opening night.

Around them swirl little bits of drama concerning other members of the cast, all full of similar piss and vinegar. Fellow senior Heather (Julia Boyd) gets passed up in favor of a freshman for a larger role; self-described chanteuse Mitchell (Chris Schermerhorn) keeps coming late to practice, a no-no for Ricky; and perpetual dumping ground Javier Rivera (Luis Avila) gets the brunt of both Ricky’s and Josh’s scheming and posturing, relegated to being undervalued and overlooked. (He’s also the recipient of one of the film’s best running gags.) 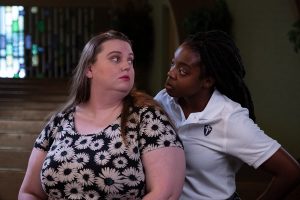 Steele plays Ricky with the kind of zeal which makes you alternately want things to work out or for him to crash and burn under the weight of his own pomposity and self-delusion. He’s constantly covering up his true feelings with a false, “the show must go on” smile while using quick footwork to pivot his positions on each new obstacle he encounters. Admittedly, he’s done the work and should be rewarded for it, but at the same time his presumed superiority over everyone he encounters and the backhanded crap he throws at people makes you want to smack him on the back of the head. (Google “Gibbs slap.”)

As Ricky’s villain, Brundidge gives Josh a slippery (but not gross) kind of feel and makes him one of those people who’s pretty much naturally good at everything they try. We’re also given enough to believe he’s a nice guy, but even that’s thrown into sharp relief once he starts taking the narration over toward the middle of the film. It’s fun that the film plays with our perceptions this way, and Steele’s screenplay allows ample space for both of their stories to be told with a raucous, bubbly feel which lasts until the final credits roll. The welcome appearance of veteran actor Jake Busey as Josh’s father adds to the anything-can-happen vibe, coming in as the stereotypical proud sports dad who suddenly has to deal with Josh’s sudden theater aspirations. 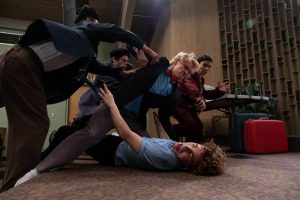 For the most part, Divos! is a lighthearted, breezy comedy, but serious issues – poverty, sexuality, social standing, family illness – also pop up with appropriate emotion and are handled with good care. But when the film’s rolling, it pops and explodes with vibrant intensity, making you swerve from training/rehearsal montages to high school parties to being needled by the overachieving student journalist/club president/god-knows-what-else to parental obsessions with their kids’ success… It’s a lot, but Steele and company grab onto us and twirl us into their world with ebullient gusto and vigor, leaving us to hang on for everything it’s worth.

Not Rated by the MPA (contains mild profanity and a lot of shade, nothing too objectionable – equivalent to PG). Contains a post-credits dedication over one scene’s alternate takes. Running time: 98 minutes. Released by J&R Productions and Freestyle Digital Media.
Posted in Movie Reviews