Posted by Eddie Pasa on July 7, 2020 in Movie Reviews / No Comments

Just because you’re paranoid doesn’t mean they aren’t after you.
— Joseph Heller, Catch-22

Paranoia, they destroy ya.
— The Kinks, “Destroyer”

These two phrases leap out when viewing Browse, a film rooted in how much technology has a stranglehold on us. We rely on a vast array of microchips, motherboards, audio/visual interfaces, and a whole mess of wiring to keep our lives in order; what if it suddenly all went balls-up? Are we in any position to fight back, much less understand what’s happening? Or is what’s unfolding coming from our past, a reckoning of events we’ve blocked from our memories? Are the explaining hints right under our noses, but we’re too caught up in a potential mystery to even see how close the truth is to our realizations?

At first glance, Browse unfolds as the biblical story of Job – a man loses everything and can do nothing in retaliation, believing somehow, somewhere, good will prevail. We’re introduced to Richard Coleman (Lukas Haas) and his Los Angeles life – well, “life” would be too strong a word; what he’s living is merely an existence. He’d rather turn to his smart home device for company than the annoying-yet-well-meaning Kyle (Bodhi Elfman), his building’s apartment manager who’s more interested in talking maniacally about stuff Richard doesn’t want to hear. The only time we see Richard reaching out for any kind of normal human interaction are engaging with a dating app, having passionless sex with Rachel (Allison Dunbar) who lives one floor above him, and trying to work out a reason why his boss wants him to fire subordinate Claire (Sarah Rafferty). 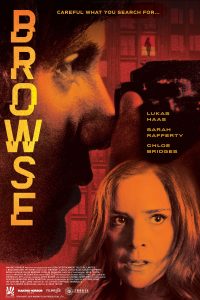 But trouble starts when he’s made aware that he’s behind on rent, as well as payments for his rental furniture. A sudden discrepancy in his bank accounts seems to be the beginning of a disastrous spiral, threatening to make his dreams of suicide and death come true. His dating app match Veronica (Chloe Bridges), stands him up, only to wheel on him in disgust; his ex-wife Roxy (Jocelin Donahue) threatens him with a restraining order, claiming he’s been following her around and calling her incessantly (the details of their breakup are never disclosed); a Beretta 9mm (sans magazine or ammunition) mysteriously shows up at his front door; and, as luck would have it, Rachel filmed them having sex and put it up on her website.

Everything is wrong about Richard, seen going from comfortable at first to absolutely disheveled and broken. Haas puts forth a nervous, unsettling performance as a man quickly finding himself under a gun (both literal and figurative), and he has a way of making us not know if reality is truly present in Richard’s waking life or otherwise. We wonder if there really is a creep behind his meek exterior, but these drastic turnabouts throw our perception of him into doubt. Seemingly random fades to black are inserted throughout; are these the moments where Richard does everything he’s accused of doing, like The Narrator and Tyler Durden from Fight Club? Has he lost total control of his life?

Mario Carvalhal’s script keeps us guessing until a pivotal moment which might offer some kind of perspective, but are we so culturally biased toward believing men that we can’t see what’s truly occurring? Is Richard really as good a man as he believes? As such, this examination of potential toxicity and depravity deserves a second look from the point of view of the aggressor, not the victim. Can we believe Richard’s assumptions of being hacked and manipulated, or are these lies he’s telling himself to cover for the truth that he’s a jealous stalker? Browse raises a lot more questions than it answers, but some of the answers are right there in front of us the whole time.

We want the picture-perfect life and things to work out the way they should, which is why Richard seems to rely on his tech devices so frequently – he’s never seen without his phone or his computer – instead of the people around him. But when we pull back the curtain and see there’s nothing behind it but our own selves digging our holes deeper and pulling every horrible string imaginable, is it possible to move on from gaining this knowledge? Director Mike Testin frames this story in an almost nauseatingly peculiar fashion, draping Richard in sympathy while his world collapses around him, never giving us the full story about who Richard is but dropping enough to know something’s not entirely on the level. It’s a neat magic trick, and Testin makes the skin-crawling Browse something viewers will digest long after consuming.