The picaresque Tommaso examines the post-peak life of a former bigshot Hollywood director trying to find his creative spark again. As the titular Tommaso, Willem Dafoe gives what is arguably a command performance, stretching across his many years of experience to draw the breath on which Tommaso subsists. It’s a heavy, multilayered existence which Dafoe gives Tommaso, mired in a life of personal conflict, addiction, and an ever-evaporating ability to co-exist or even co-habitate with others beyond the facile. 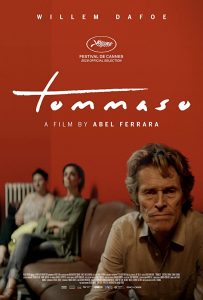 Abel Ferrara’s approach is simple, content to point his cinéma vérité lens at Tommaso and the many diversions he must suffer during his days living in Rome with Nikki (Cristina Chiriac) and their three-year-old daughter Deedee (Anna Ferrara). The camera’s iris seems fully open, allowing every scene to be saturated with light and color, a contrast to the internal turmoil raging inside the film’s main subject, with whom we walk for the entire running time. Not one scene takes place outside of Tommaso’s view; the only location different from his is intercut during a phone conversation with Nikki – whom he alternately claims is his wife or girlfriend, a designation which depends on whatever advantage he’ll get from it – while she and Deedee are at her mother’s house.

We see him at Al-Anon meetings describing his former ways – getting off on throwing money around and being “the guy,” crack and heroin use, womanizing – but he still has to be the savior in his little microcosm. Everything has to revolve around him, everyone must cater to his physical and emotional needs, and he’s not getting what he wants. He’s turned his drug addictions into self-addiction, and this is the absolute discomfort Ferrara weaves into this film from beginning to end. Tommaso has everything – a beautiful wife, a darling daughter, a pretty apartment, avenues for artistic creation, and generally fitting into Rome as an American – but he wants more from every person or scenario he comes across.

And it’s our fault, as well. Right from the start, we are already taking our preconceived notions of Willem Dafoe and how we think a movie with him will play out, constantly expecting some kind of craziness or fireworks. We don’t really know much of what his character entails until maybe thirty minutes into the film; until then, we’re just walking around with him, getting coffee, taking Italian lessons, cooking for his family, trying to have sex with Nikki before Deedee disturbs their passions. From there, we go between waking life and his own visions of what’s hiding in his heart or his darker wishes. These situations paint him as either an alpha-male stud or a victim, be it a jealous glimpse of Nikki making out with unnamed side-piece, a naked woman bringing him drinks and kissing him, a tragic accident, a tribal sacrifice, or an arrest by some kind of secret police squad.

His fantasy life starts straying into his real life, as he endeavors to commit all kinds of dalliances with his students or his fellow Al-Anon members. Even a meeting with his language tutor is fraught with an annoying sexual tension which makes you nearly scream “Oh, my God, back off of her!” while he loses professional distance. He’s still high on himself, and his final shot firms up how he sees himself and how he wants the world to see him. Tommaso has some kind of conquering drive, a need to own every space he inhabits; when things don’t go his way, he wonders how it’s his fault for caring so much. It’s a highly self-centered and self-important worldview Tommaso wields upon his sphere of influence, and the sheer amount of how much we are asked to take of it without proving any kind of point will either disturb or fascinate.

Tommaso is a filmic realization of wanting one’s cake and eating it without bothering to ask anyone else to share. Abel Ferrara claims this work is semi-autobiographical, so we can see parallels between Tommaso’s life and a director’s artistic vision, unable to let go of how picturesque and perfect he wants things to be. As Tommaso’s star has fallen, so does reality when it clashes with his wants. Unwilling to let people breathe and be, Tommaso’s grip will only serve to choke the life out of those around him, ending with a Salo-esque dance scene which asks us to pardon the insanity and absurdity of what has come before. While Dafoe solidly anchors this detailed look at a man foundering, the rest of the film feels just as inconsequential and dismissive due to the treatment of the character and his own treatment of those in his purview.