Posted by Eddie Pasa on June 5, 2020 in Movie Reviews / No Comments 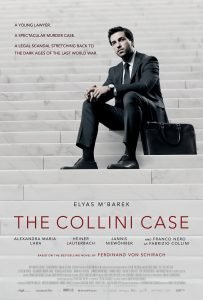 There’s a brilliant magic to the quietly powerful courtroom drama The Collini Case (original German title: Der Fall Collini) in its storytelling. All of it stems from an elderly brooding man in police custody, Fabrizio Collini (Franco Nero) – shown in the prologue to have killed wealthy German industrialist Hans Meyer (Manfred Zapatka) – and his damning silence. He seems desperate to die in prison for what he’s done, no matter what his greenhorn public defender Caspar Leiner (Elyas M’Barek) tries to coax out of him. Set in the year 2001, the murder of this beloved public figure has kicked off a firestorm with these two, Meyers, his company, and his last remaining family member Johanna (Alexandra Maria Lara) caught in its destructive path.

Where we spend the majority of the film is in figuring out the how and why of Collini’s brutal crime, the details of which are not made plain until the final 30 minutes. Even this reveal is not enough, as there are more revelations to follow. The script has set forth one agenda: make the audience squirm with anticipation before unleashing a powerful knockout blow, a metaphor given some weight when considering early shots of Leiner at a boxing gym. He’s seen preparing for a fight, but the one he finds himself in isn’t timed by a bell and doesn’t involve gloves. There is a fair amount of footwork involved as Leiner is forced to dance around his client’s lack of defense while plain-as-day evidence keeps coming like a barrage of uppercuts. 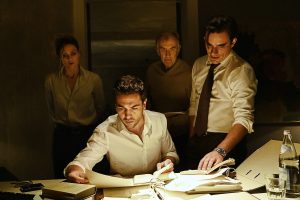 The biggest conflict in all of this? Leiner grew up at Meyers’ sprawling, castle-like estate, seeing him as the grandfather he never had after his own father Bernhard (Peter Prager) split on Leiner and his mother. The car Leiner drives was given him by Meyers upon graduating with good grades, and Meyers’ granddaughter Johanna was his first love. Having taken the case without knowing even knowing Meyers’ full name, he asks to recuse himself from it, only to have opposing attorney Dr. Richard Mattinger (Heiner Lauterbach) encourage him to stay on, gently disparaging Leiner’s avoidance of mixing his own personal feelings with business. Mattinger’s not without his own connection, as he was once Leiner’s law professor.

The film’s threads are woven tightly, but without an air of antagonism or malice; it’s courtroom drama unlike the gavel-banging, finger-pointing, “J’accuse!”-type dramas we’re so used to seeing in the US. It’s the pursuit of justice accompanied by a genteel, empathetic matter-of-factness clothed in a thunderous, action movie-like pace which arrests us from the first minute to the last. Based on a novel by Ferdinand von Schirach, the screenplay by Christian Zübert, Robert Gold, and Jens-Frederik Otto’s crackles and pops with incendiary revelations of calamitous and mundane proportions alike. We are jolted by every circumstance, be it the fumblings of love in the backseat of a car, a horrible accident, or the motive behind Collini’s brutal act. Each moment has surprises, injecting mystery into each discovery Leiner makes and not just asking us to follow him, but demanding us to hold on tight as he starts galloping toward the truth. 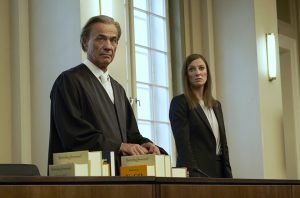 The dynamic between the immovable Collini and the runaway Leiner is fascinating, with little hints of Collini’s story escaping wisp-like from the invisible armor he wears. It’s Leiner’s first case, and he gets the man who killed his surrogate grandfather; this internal conflict is visible even when trying to keep a professional game face on in the early goings. There’s no quid-pro-quo kind of negotiation between them, no “I’ll tell you a little bit at a time” tease-out; director Marco Kreutzpainter prefers to drop the truth on us like a bomb, the shockwave of which catapults us into flashbacks to show Collini’s story, unsatisfied with rote narration or testimony. Collini seems to already have accepted his prison fate, and Leiner’s eagerness to find out why drives him through everyone, even old love Johanna and unexpected new assistant Nina (Pia Stutzenstein). It also drives him to his absent father, keeping with this film’s theme of righting wrongs and striving for peace.

We’re also involved visually through cinematographer Jakub Bejnarowicz’s kinetic and genre-juxtapositioning photography which wouldn’t be out of place in a modern-day whodunnit or suspense film, not a trial movie. Usually, films like these are treated with slow-speed cranes and pans dripping with gravitas and weight; here, Bejnarowicz stokes the film’s spoken tones to a roaring blaze with fast close-ups and Bad Boys-esque low circling shots, playing its own game of “Is it or isn’t it?” with us. There’s a wonderful shot with a subtle three-point rack focus which almost subliminally homes our attentions in on each of the camera’s three subjects during a simple walk through a room.  Even more, it’s not cut to ribbons by editor Johannes Hubrich, leaving us all the more embedded in Leiner’s search for answers. 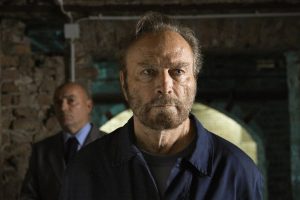 The answer comes at the expense of one of the film’s great revelations, unless you see the trailer below. Or maybe it’s a revelation to me because I went in blind to this movie, nor did I know the film or novel were based loosely on real-life incidents and people. When this sinister story point and the miscarriage of justice it entails are uncovered, the film pivots to becoming an alarming allegory on our current-day battles for justice and racial equity, and the bloody expense of “just following orders.” It’s not an on-the-nose, perspicacious commentary, but it is rather timely with its message. How far is too far? What bad-faith actor will ensconce themselves in the robes of the law to change the rules for true evildoers to escape judgment? And will we have the courage to stop it before it’s too late?

The Collini Case may have been made a few years before its US release this week (it was released on home media in Germany last October), but what it has to say is loud and clear in light of 2020 America. Odd prescience aside, The Collini Case is a compelling winner of a thriller, achieving a muted tone by not bearing the usual shouting and hysterics. Instead, it replaces these adornments with genuine human care and a shared sense of teamwork, even between opposing lawyers Leiner and Mattinger. Anchored solidly by a stellar cast and Franco Nero’s impenetrable stone-faced performance, the specters of the past come haunting not as ghosts, but visceral tolls paid in death.