Sometimes, you have to take a low-budget production as simply that – a piece of work constrained by time, scheduling, access to locations or assets, and the willingness for its participants to go all-in on the project. Driven is a fun, charming, and hilarious example of making the most out of what’s at hand, even if you can spot its tells. From the beginning, it’s plain to see director Glenn Payne has made peace with what he can do and can’t, and it’s a peace which puts us at ease right from the early goings. To make up for the lack of visual gags and eye-catching photography, Driven features two unexpectedly strong performances for a film of this nature; the rest of it stays within its bounds, never reaching for what it can’t attain and finding blazing success within. 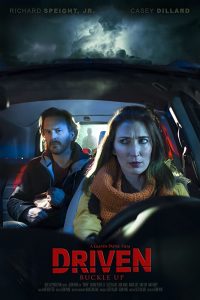 Obvious parallels to the Michael Mann thriller Collateral will be drawn since the story focuses on a rideshare driver ferrying a killer around, but there’s a more noble purpose to the adventure Emerson (Casey Dillard) embarks upon with her passenger Roger (Richard Speight Jr.). There’s a curse Roger needs to rid himself of before he can actually enjoy life, and Emerson has reluctantly agreed to be his facilitator. Why not? Emerson’s not doing anything of real importance; her inability to take a chance on anything – her former relationship, getting up at a comedy open mic – has forced her into merely existing, not living.

On the other side of the meter, Roger’s inability to shed the family curse has likewise robbed him of the fullness of life, denied the safety of having a family or friends to help him. He’s got Emerson – a complete stranger – who only agrees to drive him around after she’s seen the kind of things he’s fighting. In addition, their diametrically opposite lives provide a lot of the laugh-worthy friction required to power this bottle episode-style film. She’s living paycheck to paycheck, but she’s smart, gregarious, and good with people; he’s as rich as Croesus but can’t find his way around a book and has zero people skills. 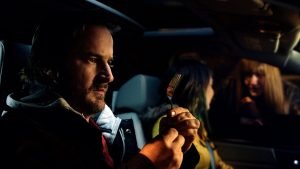 The task at hand takes a backseat to Emerson and Roger hashing out their personal and professional hang-ups, and the rapport which Dillard and Speight Jr. build with their characters is endlessly amusing. Dillard’s dry, self-deprecating humor shines amid Speight Jr.’s more pointed and brusque barbs, each fully digging in and sparing nothing as their fight against the curse turns inward due to mistakes or mishaps. Speight Jr. tends to go a little Shatner-esque with some of his line deliveries, but it’s to be accepted as part of the film’s own particular brand of bravado, making Roger a spiky, bristly yang to Emerson’s ying.

Dillard, who also penned the screenplay, gets the lion’s share of the development and laughs, and deservedly so. She provides a solid foundation for this movie to fly about like the little whirlwind it’s allowed to be in spite of its indie trappings. Emerson is given a fantastic vibe and a grounding nature for the hijinks which have taken her world over for these few hours of insanity, and she’s made perfectly at home as both figurative and literal driver of the movie. Usually, films like this feature lots of ill-restrained acting to the point where we unwantedly see the performer’s process; by contrast, there’s an rare, unforced, natural feel Dillard gives Emerson which seems as innate as one takes a breath. 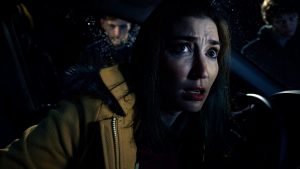 Amid all their banter, the fight between good and evil rages in fits and starts, kept unexpectedly innocuous, never straying into the gory or the ostensible. Surprisingly, no profane dialogue or overly-choreographed fights are offered the chance to take us away from the electricity flowing between Emerson and Roger, settling us as observer in their tennis match-like repartee regarding all manner of subjects. No stone is left unturned in their verbal dress-downs, from Emerson’s love life to Roger’s misunderstanding of everything, including guffaw-worthy diatribes about bathroom implements and actually doing work instead of being coddled.

It’s a simple story carried out with the simplest of methods – the most computer-generated imagery you’ll see is probably the opening and closing credit text – and kept palpably alive on the strength of two actors rooting us in the story unfolding in the confines of Emerson’s (sort-of) car. Driven owes a sizable debt to the aforementioned Collateral, Kevin Smith’s Clerks, and more than a few demon-hunting movies (e.g. Francis Lawrence’s Constantine and Robert Resnikoff’s The First Power) yet it’s strong enough to never be an insult to these influences. You’ll get the idea if you consider it to be a goofy love-child of these movies born with a mischievous grin on its face. Casey Dillard and Richard Speight Jr. make a terrific oil-and-water combination which eventually renders a brightly-flavored emulsion, and it’s an absolute blast to watch them fumble and dither their way to their respective conclusions.