The following press synopsis tells you everything you could possibly learn from or about Darkness Falls: “After his wife’s suicide, Detective Jeff Anderson (Shawn Ashmore) becomes convinced that she has in fact been murdered. Obsessed with his investigation, Anderson finds out that his wife was the victim of a team of father-and-son killers. He’ll have to break all the rules to stop them from killing other women.” Gripping, no? The story’s there, man; it’s direct and a potential firecracker. However, it goes no further or deeper, choosing instead to spin itself into artifice and triteness, every trick in the cop-movie handbook (save for one shocking occurrence) coming out and dragging the film further down into being a superficial cliché. 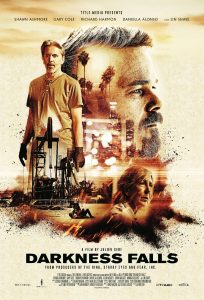 The thing with Darkness Falls (alternate title: Anderson Falls) is that it wants to be something a little more than what shows up on screen. It seems screenwriter Giles Daoust has some savvy to stitch together memorable bits from countless police procedurals and suspense films, but he forgot to fully capture the heart of the piece, which is a detective’s battle to prove his wife’s death wasn’t a suicide. We’re told this detective has a gift for this kind of thing, but it looks like nothing more than strewn reams of paper on his floor, sticking pictures up on his walls and screaming “I HATE YOU!” at them.

There’s no hook, no pull behind Anderson’s decisions or methods; he’s the typical “driven mad by his wife’s death” kind of cop who would have been fired sometime in the six-month stretch in which this film exists. Of course, he has abandoned their child Frankie (Judah Mackey) who’s been left to pick up the pieces with his grandma Kate (Lin Shaye), waiting for a Disneyland date with daddy which’ll never come. The script keeps us from fully believing and getting behind Anderson, which is an insult to Ashmore’s fine performance as the widowed avenger whose reactions are limited by bureaucratic red tape and legal regulations.

Likewise are we insulted by the limited appearance by the father-son duo, underplayed by Gary Cole and Richard Harmon. It’s not like Se7en where John Doe’s 10 or 15-minutes’ worth of screentime works in the film’s favor, a vibe Daoust undoubtedly wanted to give to Darkness Falls. Not only were John Doe’s murders of a more urgent and baffling nature, they also fill the film with dread and purpose, something taken out of Darkness Falls’ sails from the opening minutes. Director Julian Seri included a lot of shots where maybe we might see Cole and Harmon in the background somewhere to give us a little more ominousness or suspense, but nothing is made of them beyond their two appearances during the film’s prologue and third act.

Cole plays his role like he’s just a normal office co-worker you might have at a backyard barbecue or coaching your kid’s baseball squad, but the fact that he despises women just rolls off like a minor annoyance rather than a true character trait. As his son, Harmon comes off like a young Patrick Fischler (the Winkie’s victim from David Lynch’s Mulholland Dr.) in mannerism and patois but isn’t allowed a lot of time to truly define himself, especially since we think every line he delivers is a lie. Between the two of them, you can see them almost frustrated with the fact that they aren’t allowed any time to go off the hook or to further help the audience dive into what they bring to the film.

We’re riding shotgun with Anderson the entire film until an overly-telegraphed late-game “contingency plan” twist pops its head into the proceedings. It’s simply isn’t earned and makes no sense, coming strictly from Daoust’s Se7en adulation, and it hinges solely on the supposition that Anderson would be involved in their capture somehow. This sequence pretty much captures Darkness Falls in a nutshell, that it’s willing to play these kinds of games but doesn’t play by any rules, much less its own. There’s no nuance, no style, no atmosphere; there’s only a shameless aping of film tropes which act like spices trying to cover up for an unsatisfying main course.

Not Rated by the MPAA (contains violence and language – equivalent to R). Running time: 85 minutes. Released by Vertical Entertainment and Title Media.
Posted in Movie Reviews