The High Note goes down as smooth as you’d expect, like a comforting mug of hot chocolate. It’s sweet, frothy, and relatively harmless, with little edge to cause any unease or sour aftertastes. With our stomachs full of similar male-fronted films, a female perspective – from both in front of and behind the camera – on the music industry is most welcome. It’s a mythical world where people sink barbed comments into the nearest body, but there’s a laudable choice to build up over tearing down, quite contrary to stories like these we’ve known from films past. 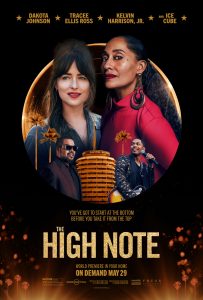 The film’s giving kindness is almost an anomaly amid our current-day deluge of movies and TV shows featuring self-possessed, overentitled jagoffs who preen and posture for every kind of perceived advantage over their screen opposites. Almost in defiance of these notions, The High Note is a modern-day rags-to-riches (well, not exactly “rags”) fairytale in a fairytale world, where the meek are trod upon with spit and spite, the haughty are rewarded with adoring fandoms and a later comeuppance, and an lowly peon tries to rise above her station.

It’s how the best of children’s fairytales go, just translated to the modern era and given some new clothes, but the self-rescuing princess at the heart of it is no damsel in distress. Maggie Sherwood’s (Dakota Johnson) is a go-getter, full of hustle in her position as venerated R&B diva Grace Davis’ (Tracee Ellis Ross) personal assistant. Grace hasn’t released new material in over ten years, riding the wave of her former glories into packed venues, but Maggie’s taking advantage of her proximity to encourage Grace to take the chance on fresh recordings. 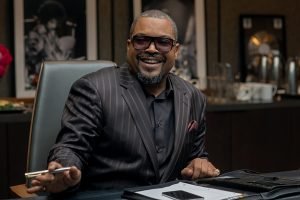 The notion of repackaging old material as hip hotness is certainly given its due through a cameo by current hitmaker Diplo, playing a producer who’s done a horribly-remixed update of Grace’s most beloved song. Maggie’s no slouch in the producing department, though – she’s taken one of Grace’s live performances and mixed it beautifully, and Grace’s approval gives her the gumption to go further. After discovering David Cliff (Kelvin Harrison Jr.) playing catchy tunes outside the Laurel Canyon Country store, she decides to give him a shot – a shot that will propel both of them out of obscurity and into the bigger leagues.

Along the way, we’re dosed with personal conflicts and bits of jokiness due to Maggie being at Grace’s constant beck and call. Most of this comes from scenes comparing Maggie’s relative “poverty” to Grace’s high-dollar life; a scene where Maggie picks up an inebriated Grace in a run-down jalopy (as opposed to Grace’s own flashy convertible) and takes her on a drive-through run is one such memorable sequence, highlighting the sisterly affinity each has for the other. In contrast, Maggie’s the butt of Grace’s manager Jack’s (an ever-reliably forthright Ice Cube) down-punching harangues and bizarrely hilarious house-sycophant Gail’s (June Diane Raphael) weird taunts and dubious, self-serving recommendations. Everyone’s got their part in this comedy of errors and Maggie’s own hero’s journey; whether friend or foe, they’re all the spurs she needs to get her voice heard. 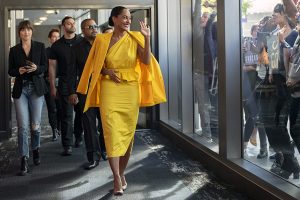 Being a name producer carries a lot of weight in Hollywood, both in music and film. An experienced ear can almost tell the works of Rick Rubin, Dr. Dre, Pierre Marchand, or another heavy hitter like them from the first notes of the leadoff track on any of their records. There are certain frequencies, characteristics, and tendencies which each producer is known for and is relied upon to bring to the recording. Likewise, looking at The High Note’s main producing team of Tim Bevan and Eric Fellner, we can almost guess what we’re in for when we see their names on the poster. Known for comedies like Four Weddings and a Funeral, Notting Hill, and The Hudsucker Proxy – which all feature stories of the main character going against the grain for a shot at improbable personal victory – their presence lends the familiarity and predictability which seats The High Note in the aforementioned “comforting” zone.

Director Nisha Ganatra grants the kindness of Flora Greeson’s underdog script a spirited strength and an easygoing vibe, allowing for the stress of Maggie’s job to have enough inherent drama so we can focus purely on her relationships with Grace, David, Jack, roommate Katie (Zoë Chao), and – infrequently – Gail. Greeson has written an empathetic, grin-worthy film rooted in a kind of grudging respect. It’s kind of like what Mike McDermott said in Rounders: “You don’t see piranhas eating themselves, do you?” There’s a fight in each of these characters clawing their way to their desired ends, whether it’s to get back on top with new hits or becoming the next big thing, but the mini-battles are waged with a sense of humor and a caring candor among friends. (Well, except for Jack – he’s just a dick.) 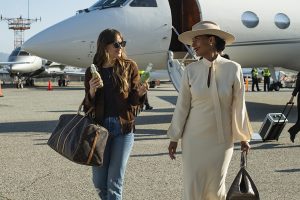 This sweetness is more than enough to get us over the predictable nature of films like this: the star wants more than what her manager says she wants, the woman with something to prove gets her chance, and it all falls apart just in time for it to come back together at a pivotal, heartwarming moment. We’ve seen it in films like Almost Famous and Get Him to the Greek, and there’s not much new here. But what is of note is how good-natured most of these characters are, allowing for mistakes and giving or getting the opportunity to build on those mistakes. It might be the very definition of what I call the “inflight movie” – patently inoffensive so it won’t lose too much when edited for airline or television use – but The High Note belts its own tune by celebrating a genuine camaraderie between women looking out for each other personally and professionally.