The (not pejoratively) dry, black-humored Lucky Grandma is quite a charmer, thanks largely to veteran actor Tsai Chin, whose illustrious career has spanned six decades. Once a Bond Girl in You Only Live Twice (and coming back for 2006’s Casino Royale, too!), Lucky Grandma brings her back to the action arena… sort of. Don’t be mistaken – Grandma Wong (Tsai) isn’t making like John Wick or anything like that. She’s only a New York City widow whose fortune teller says she’s going to be very lucky on a certain day, and she takes full advantage of it by taking the Chinatown bus to Atlantic City and winning thousands of dollars. 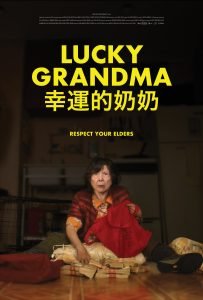 However, she doesn’t hear the bell chime at midnight, which is when her all-in bet goes bust. As her downturned luck would have it, her seatmate on the bus back quietly dies of a heart attack and she discovers he’s got a bag filled with stacks of cash, which she takes when she leaves the bus. So begins her worsening predicament which finds her the target of two different factions, the Red Dragon gang and a snakehead mob, both looking to recover the lost fortune. She hires a bodyguard, the gargantuan Big Pong (Hsiao-Yuan Ha), but the gangsters still find ways to get to her and her family.

Forget about the action, though. What we’re here to see is the meeting of the old and young, and how displaced Grandma Wong is, both physically and emotionally. Her husband is gone; her son is inviting her to live with his family, but she refuses, insisting on her independence; and now, she’s of little use and without much but $1700 in the bank. Because of a momentary lapse of reason (or perhaps seeking purpose), she finds herself in in possession of more money than she knows what to do with, resulting in her being shot at, drugged, and smacked around. Throughout this, Grandma Wong fights desperately to keep what’s hers – her dignity, her family, and maybe the stolen money – in an effort to maintain some kind of status quo. She wants her life just so, but is fast losing her time to keep it that way. 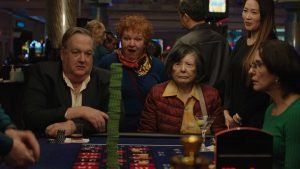 Tsai Chin is a marvel, allowing Grandma Wong’s quick wits to flit across her face with deft precision. She’s a gifted silent storyteller, no matter if she’s looking at a remembrance altar, trying to walk quickly away from the gangsters hunting her, or moving her stacks of casino chips into play. It’s not an overplayed, “Three Stooges” kind of physical comedy; instead, Tsai Chin plays it subtly and coolly, never letting high emotions get the best of her, even if bullets are flying or if she’s being gently shaken down by local snakehead Sister Fong (Yan Xi) for the missing money. Who’s to say actors of Tsai Chin’s age need to stop doing these kinds of movies? Granted, no one’s expecting her to do Jackie Chan-style high kicks and John Woo-esque gunfights, but she – much like her character – hangs in there beat-for-beat with the younger generations dotting this movie.

Much like Grandma Wong, Lucky Grandma rides on a lot of subtlety for its humor. Sure, there are big-laugh moments, but the less-overt laughs are also the most rewarding. A weapon malfunction, a shockingly sudden death, the confidence of a big-money gamble, or even a reaction to a bullet wound – these are more laid-back zingers earned with precision, not from throwing a ton of humor at the wall and seeing what sticks. The film’s brand of dark comedy plays a lot like Fargo or any other of the Coen Brothers’ films where characters can only stand and watch as people get hurt and the bodies start piling up. It’s this kind of matter-of-factness which helps the film stay grounded and real while touching the slapstick or outrageous comedy plane without diving fully into it. 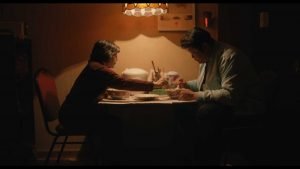 While Tsai Chin holds the film down with steely resolve (while smoking a carton’s worth of cigarettes!), an unexpected surprise is the lovable lunkhead Big Pong, played guilelessly by Hsiao-Yuan Ha. He fills Big Pong out as a devoted but hapless milquetoast who can turn on a dime and knock opponents out with his meaty fists. Of course, that’s if he’s not caught off-guard by a sucker punch or if he’s off buying tea, which is wont to happen more often than not. As is always the case, he’s never around when you need him, but he catches up quick and doesn’t hesitate to do his job. Hsiao-Yuan Ha is an endearing delight, even when Big Pong’s just sitting around drinking with Grandma Wong or having a quiet meal with her.

Lucky Grandma is full of these quick stingers, but it’s not constructed from disassociated scenes or jokes strung together. It’s a rough ride Grandma Wong’s set herself up to take, and we can’t help but hang on as she careens in and out of the turns. Her supporting cast ably props her up and becomes lively co-conspirators, both as fellow actors and as the characters they play. There’s a more focused comedic hand at work here, with Sasie Sealy’s direction keeping more to the sly and underhanded rather than egregious and obvious, seating us in a perfect spot to enjoy Lucky Grandma’s easy-breezy spirit.

Not Rated by the MPAA (contains some violence and a lot of smoking, equivalent to PG-13). Languages: English, Cantonese and Mandarin with English subtitles. Running time: 87 minutes. Released by Good Deed Entertainment. Opens in virtual theaters 5/22; opens at DC’s The Avalon virtual theater 5/29.
Posted in Movie Reviews