Why do we, as a culture, indulge the self-important need to know so much about the wealthy and the powerful? Do we really respect them for “being just like us” when the trash behind their carefully-curated public image is revealed? Are we attracted to the money, the lifestyles, the cars, the houses, the glitz and glamour of poshness? Is it because we wish we could have these things and act the way these people do? Do we secretly want to be in a position to treat those less fortunate with dismissive disdain and disgust? And are we willing to do what it takes to scratch and claw our way into this kind of life, no matter if it means murder or other unlawful activity? 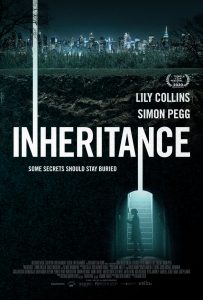 Television shows about the rich and famous have never entranced me, which plays into how I took Inheritance as just another look into Privileged White World. Where millions of dollars are tossed around like you’d give a friend a buck-fifty for a soda. Where men treat others as playthings. Where marrying a black man is frowned upon as not being a good look for the family. Where the rich live in opulence a stone’s throw away from people starving on the streets. Where a deeply-buried survival bunker in the back of a palatial estate leads to a rather damning example of just how people are seen as simply means to ends or obstacles in one’s way.

Inheritance is a thrilling bit of conjecture regarding how the powerful deal with these obstacles on several different levels. Everything in the film is a result of Monroe family patriarch Archer’s (Patrick Warburton at his most non-Patrick Warburtoniest) choices and his eventual death, shown in the opening moments. As one character succinctly puts it, he was driven by three things – gambling, women, and ego – and all of these vices are wreaking bloody vengeance upon the family he’s left behind. Archer’s daughter Lauren (Lily Collins) becomes the audience’s eyes and ears, as she’s as much of a stranger to her father as we are due to her career choice. The opening scenes define everyone quickly, and it doesn’t hurt that all we need to know is that the Monroe family is wealthy and in distinct positions of influence. Archer’s sprawling, wooded estate has a view of the Manhattan skyline, almost solidifying the film’s theme of overarching power and ruling from afar. Although retired, he still has his toes in the pool via his many political and financial connections, as well as both his son William (Chace Crawford) who’s in the middle of a Congressional re-election campaign, and Lauren, who’s currently serving as a Manhattan district attorney.

But this is what the whole movie takes its time to tell you, as the only time we see present-day Archer alive is in the opening minutes. Only after being willed the entire estate – and most importantly, the contents which lie within – does the estranged Lauren discover what kind of man her father was. She also has to decide what she might need to do to make sure her family’s legacy and reputation remains intact after finding Morgan Warner (Simon Pegg), a bedraggled man imprisoned for 30 years in a bunker on her newly-inherited property.

Collins and Pegg are magnificently beguiling in their scenes together. One almost expects a Silence of the Lambs-esque Clarice Starling/Hannibal Lecter dynamic, seeing Morgan’s fragile mental state and Lauren’s savvy being put to good use. Thankfully, Collins and Pegg steer us away from this by simply being two people thrown into a circumstance beyond either of their control, and they have to make the best of it. Editor Kristi Shimek’s choices gift us the time to appreciate Morgan’s surroundings, and also to dig into the subtleties of both Collins and Pegg’s performances.

As much as Lauren wants to believe she’s in control, this huge blip has caused the rest of her life to spiral out of control. In the few days’ timeframe of the film, she is in danger of neglecting her family and her job while trying to keep this secret from ruining her career as a DA, her brother’s re-election, her widowed mother Catherine’s (Connie Nielsen) life, and her father’s public legacy. As an actor, Collins has a lot of juggling to do, and her skill is evident in the first minutes as Lauren’s informed by a journalist scrum about her father’s death. She is forced to maintain a professional front in the face of devastating news, and Collins plays this kind of embittered and regretful balancing act with brilliant nuance throughout the remainder of the film.

Likewise, Pegg’s Morgan is a guy who just happened to be in the wrong place at the wrong time to witness Arthur commit a fatal transgression, thus prompting Archer to take drastic measures to protect himself – and his power – from the consequences. Boasting an unshakable American accent, Pegg gives us a portrayal of a man who only wants to be free and won’t tell a soul about what he’s seen or what’s happened to him all this time. He’s taken to a drone-like recitation of a recipe for Key Lime Pie, but that’s about as we’re granted in the way of supposed lunacy; he’s just a normal dude… or is he?

There’s always some kind of shoe waiting to be dropped straight from the beginning, which features Shimek’s effective cross-cutting between both Lauren and Archer running and breathing heavy for very different reasons (she’s jogging, he’s bloody and driving erratically). But director Vaughn Stein seems to make this editing style a motif for the whole film, with one person knowing the horror of the truth while the other is on the other side of it, waiting for it to come knocking. Fewer films have been more maddeningly carrot-dangling without a substantial payoff or advancement of the plot; in the end, when the final revelation comes down, we wonder exactly how much of each twist was germane to the end, or if each plot point was merely to show how power corrupts the soul.

Truly, this is what Inheritance is about, so tidily wrapped up in the film’s final line: “You’re an Archer. We take care of our own.” It’s not much of a stretch to extend this sentiment metaphorically to the powerful and wealthy in general. An accident involving someone less fortunate results in specifically not doing the right thing due to the need to stay on top in the public eye, be it mentally, physically, politically, or financially. What if we’re not told the whole story? Will it be worse than not doing the right thing? Or will it be left to be swept under the rug by those with means? Fascinating performances power the questions Inheritance asks, but its script drops its search for righteousness in favor of an ending which cements the ultimate truth: that those in power will do anything it takes to stay there.