Between John Hawkes’ timid mess of a father and Logan Lerman’s recently-imprisoned son, there’s a lot of awkward silence highlighting a world of difference. Frank Fogle, a man scared of his own shadow, and Sean, who won’t be cowed by anything, are about to embark on an intercontinental voyage which might prove blood is truly thicker than water. End of Sentence is a hesitant road trip movie punctuated by confrontational and uneasy atmosphere amid a beautiful countryside, a surely unsettling experience for a film so quiet. 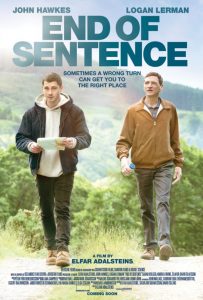 Even more unsettling is the screenplay’s treatment of women, seen only to portray a dying cancer patient, a seductress, or gossip-mongers who fuel a stomach-tightening side to Frank and Sean’s journey. But it’s one of the film’s contemptuous ways of eliminating any kind of middle or safe ground we might possibly want from a film like this, where nothing about the situation it presents is good, nor are its participants. It physically makes one uncomfortable and fidgety throughout on a multitude of aesthetic and intuitive levels, and the viewer is left screaming for some kind of exculpation from unmanageable tension.

Does it sound like I’m describing a suspense thriller, the likes of which would satisfy Alfred Hitchcock, Brian DePalma, or The Descent-era Neil Marshall? Perturbingly enough, no. It’s a simple story about Frank fulfilling his wife Anna’s (Andrea Irvine) final wishes, to have her cremains scattered in a specific Irish lake and to have Sean come along. But we start immediately with the horrible parts – Anna’s last goodbye at Sean’s Alabama prison and her funeral. Sean has expressly written only Anna’s name on the list for this visit even though Frank’s there as well, so we’re clued into this point of conflict and set for constant friction.

Not even the way Frank and Sean are edited together in one sequence showing them getting settled for bed – Frank on a too-small sofa with the blue light of a television illuminating his unrest, Sean staring at the ceiling from a constantly-lit prison bed without the luxury of darkness – provides any respite. And if you thought picking Sean up after he’s released would require nothing more than the wish of his mother spurring him on to take the trip, you’re sorely mistaken. Sean’s seething hate and disdain for Frank is drawn out to unexpectedly funny lengths, only halted when the promise of a plane ticket and complete absence from his life are offered in exchange for completing the task. The atmosphere is layered thick with this kind of bleak humor, but never the laugh-out-loud type. Well, except for one hell of a guffaw-inducing crack-up moment which has the simultaneous effect of allowing the film’s sense of constriction to relax just before we realize we have a new reason to cringe. 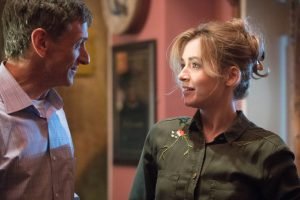 If you look at the ways Frank and Sean comport themselves, one might see two examples of how childhood trauma changes someone, the evidence of which is made startlingly plain during a late confrontation. You’ve got the people-pleasing pushover saddled with someone whose only defenses are alienation and a will use his fists to protect his small slice of ground. Sean isn’t shown to give a damn about anyone, and Frank’s too busy caring about everyone, including hitchhiker Jewel (Sarah Bolger) whom Sean meets when they arrive in Ireland for Anna’s wake. And because a wealth of Anna’s pictures with friends coughs up a Polaroid featuring a her on the back of a motorcycle – which we surmise Frank would never in a million years get on or own – with a leather-clad hunk at the handlebars, he discovers through her mourners there might be a connection between Anna, the biker, and the lake to which they’re headed.

If the script wasn’t enough, director Elfar Adalsteins and cinematographer Karl Oskarsson also visually hammer home the Fogles’ problems, never framing them in anxiety-soothing two-shots or positions of support. Oskarsson’s compositions spotlight the magnitude of their distate, one always staring at the other’s back or close-ups with the opposite person out of focus. Meanwhile, he takes care to shoot locations and motoring scenes in a manner fit for a cinematic travelogue, enticing us with lush Irish greenery and romantic settings like a musty barn or a posh hotel. Adalsteins’ true revelation is achieving this precarious, yet somehow solid balance between eyefuls of beauty and the unseen horrors of the Fogles’ lives meeting and resulting in a film-long series of muted and damaging explosions. 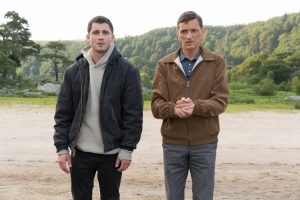 John Hawkes and Logan Lerman are to be commended for maintaining this blanket of suffocation, as far apart in personality as they are in body type. Hawkes lends Frank a slender shape, posture, and demeanor which gives us the near certainty he’d be knocked down by a wafting breeze, while Lerman’s muscularly stocky frame seems almost Incredible Hulk-like by comparison. The vast physical and mental chasm separating the two couldn’t be wider, and Adalsteins makes sure to keep this perspective while throwing them through Michael Armbruster’s bristling script, setting the two off with every progressive occurrence.

Yet there is some promise in the title. End of Sentence could be about what Sean does after he’s freed, or maybe it’s about Frank’s obligations to his family before losing them permanently. Maybe it refers to them being stuck together in a car and what their arrival at their destination means. It might be about healing the deep scars of familial violence. Or maybe it’s in the closing scenes when the audience might be let off the tenterhooks they’ve been thrust upon since minute one. Any way you take it, End of Sentence is a comedy of the darkest kind – so dark, you might not even see it, but it’s there. It’s also a brilliant binding of shadows and light, each eviscerating their opponent in a heated competition to see which one gets loose first.