NOTE: This film lives and dies by its twists and surprises. In order to keep things enjoyable, I refuse to print spoilers for this one, so please forgive the vagueness.

This is a first for me: a murdering Satanic cult movie! Of course, there’s way more to We Summon the Darkness than it being beholden to candles and inverted pentagrams, but for now, let’s stick with it. It’s a film the likes of which the late Wes Craven would have either made or appreciated, combining his brand of black comedy with the simple horrors life is capable of making us witness or inflict on others. It’s also a modern throwback to the grindhouse era, its discomforting sleaze (which might be too strong a word) making you want a shot from your nearest bottle of liquor after the first twenty or thirty minutes. 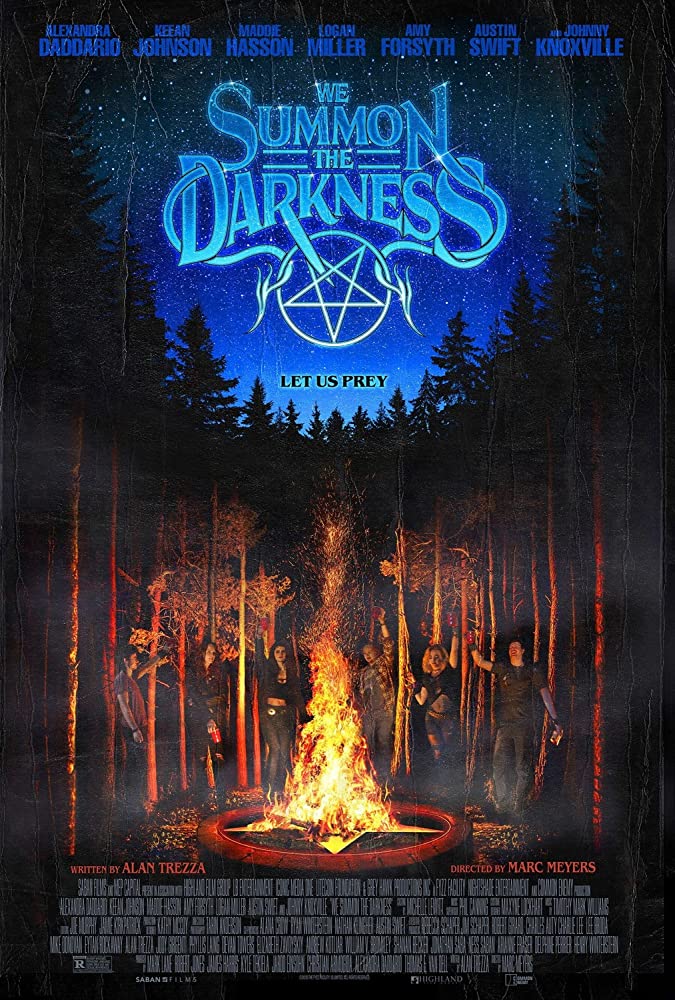 Screenwriter Alan Trezza takes us back to July 1988 – not that you’ll see onscreen titles telling you so. No, director Marc Meyers drops us right into the action and expects us to catch up and pay attention for clues as to the film’s timeframe. It’s a game we play willingly, already captivated by spiky dialogue and the curiosity Meyers engenders straight from the off. Don’t worry, there’s a nigh large hint toward the end of the first act which’ll give you an exact reference enabling you to get your bearings – listen for an album release date being discussed – but there are little things up to that point which might slip under your radar (tube televisions, a lack of cell phones, and the hair OH MY GOD THE HAIR) which speak louder than any kind of chyron or dialogue scene.

Meyers’ keen ability to play with audience expectations is evident straightaway, a characteristic of the film which lasts all the way to the credits. We’re seated next to Alexis (Alexandra Daddario), Val (Maddie Hasson), and Beverly (Amy Forsyth) taking a road trip to see their favorite black metal band (who sounds a lot like Mercyful Fate), gabbing in expectedly-overexcited teenager tones. They look like the usual slasher film girly-girls out looking to have a good time, even with the local radio station pumping out news about the latest in a spate of Satanic murders and an unseen passenger in a darkly-painted van throwing something at their car and forcing them off the road. 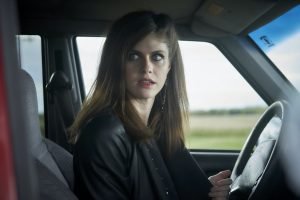 Throughout these first few minutes, we’re given all the regular horror movie exposition – Alexis is the smart girl, Val’s the bubblehead who can’t hold her bladder, and Beverly’s the reserved one, looking like she’s not even allowed to be in the same car as these two. But when they meet the trio in the van – Mark (Keean Johnson), Kovacs (Logan Miller), and Ivan (Austin Swift) – and give them a comeuppance, we find out more about the murders which provide a sinister underpinning to the concert they’re attending. All these Satanic murders joined by not just the imagery surrounding the crime scenes, but also there’s three victims at each location; isn’t it a hoot that there’s three guys facing down three girls?

We Summon the Darkness takes all of our expectations and flushes them away after this thick setup, tossing up gender roles and archetypes as it wreaks its own merry path of chaotic destruction. It’s also a deconstruction in the same vein as Drew Goddard’s classic The Cabin in the Woods, and it doesn’t care about how you think it should go. All it knows is that it’s got purpose, and it’s going to get it in your face whether you want it to or not. Swipes are taken at true believers and poseurs alike, skewered to the point of goofy caricature or melodramatic seriousness. 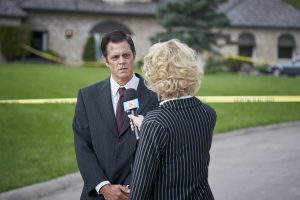 Part of this satire comes with Johnny Knoxville being cast as preening, Bible-righteous televangelist Pastor John Henry Butler, both in performance and by nature of Knoxville himself. Known most for the shenanigans from his “Jackass” television show and films displaying his devil-may-care attitude, he’s as dialed back as can be, flashing his salesman’s bleached-white teeth and actually acting while digging into his limited screentime. It’s almost too perfect a casting decision for this small role, comparable to the likes of a certain -ahem- “director” in the aforementioned The Cabin in the Woods.

Characterizations like Knoxville’s and the gender-separated trios serve the story totally and without fail, with villains and innocents given more meaning than typical horror film fodder. Each member of the trio is a reflective opposite of their counterpart: oafish-boy Ivan and the striking, outgoing Alexis; newcomer Beverly paired with the departing-town-to-make-it-in-L.A. Mark; the supposedly wild duo of Val and Kovacs trying to subtly one-up each other. They’re not just coupled (or not-coupled) for coupling’s sake; each gives off a sense of danger or that they’re not at all who they purport to be. 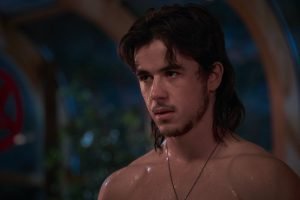 This kind of genre-subverting fun gives Trezza and Meyers freedom to thrash us around with unabashed glee, and you can almost see the smiles on everyone’s faces after yelling “Cut!” and saying to themselves, “Yeah, we just did that.” We Summon the Darkness rips your expectations to tatters and tramples on their remains with mischievous aplomb, each scene of darkly comedic and bloody madness being topped by the chaos of what follows. It also finds time to breed a sense of suspense and brainwashed psychosis, with stalk-and-slash scenes turned inside-out with the drive of “death at all costs.” Confident, brash, and unrelenting, We Summon the Darkness scorches the ground it walks on and leaves you in its fiery dust.