To be honest, the overly-colorful, incessantly-happy world of Trolls wasn’t something I was looking forward to visiting again. My review of the first film went out unstarred – not to be taken as “zero stars” – because of how at odds the film was with its morals and methods, but the film itself was decidedly not bad. Its sequel, Trolls World Tour, is a much easier film to stomach, especially with how my concerns about the first film are more than handily addressed within. In fact, it’s almost a note-for-note response to the previous movie’s ideals, which claimed music and being happy could defeat the sadness that life brings. This seemed seemed shallow at best; in my review I likened it to trying to put a Band-Aid over a spurting wound. 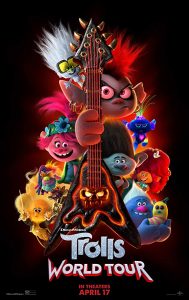 This film finds the eternally-upbeat Queen Poppy (Anna Kendrick) and her best friend Branch (Justin Timberlake) on a quest to unite other musical Troll kingdoms (Country, Classical, Funk, and Techno) with the Pop kingdom against the conquering Rock kingdom. Each of the six gains their musical power from a mythic string, originally all on one lyre but separated when the different styles couldn’t get along, with each kingdom built around their respective strings. It takes Poppy seeing different music performed with different feelings – and trying to combat one particular style with a medley which could be labeled “Most Annoying Pop Songs” – to realize that maybe her answers aren’t the answers to everything.

In essence, she’s trying to do exactly what Rock Queen Barb (Rachel Bloom), is trying to do: make everyone the same. Trolls World Tour is kind of fascinating in this respect, that while Barb’s look and manner might scream “EVIL!”, Poppy’s push for union under her pop stylings may be just as bad. Well, there is the fact of Barb and her minions destroying every musical Troll village and imprisoning their citizens on her push for Troll world domination, which might be the only thing drawing the line between “heroes” and “villains.”

Parallels could be drawn to many different eras in our own history, from real-life examples of wars and religious crusades to the Saturday afternoon kung-fu trope of rival schools fighting each other to assert dominance. (I couldn’t help thinking of Chris Klein from American Pie saying, “The Shaolin masters of the east and west must unite! Fight! And find out who is number one!”) Because of this more tangible connection to us as humans, Trolls World Tour succeeds in a more satisfying way than its predecessor, even if it seems a little predictable in its world’s trappings. The way the film moves and behaves – especially with most of it still focused on the superficial – almost lets you know exactly how it’s going to end and the exact wording said at the big wrap-up. However, if you move past its roteness, you’ll find a sweetness among friends and fellow life-travelers which makes the notion of heroes and villains almost null and void.

Even though Barb might be bent on making the world in her image, her misgivings and drive come from identifiable places, like pressure to perform her duties well and wanting meaningful friends, not just hangers-on. Her look winds up being the only somewhat scary thing about her, and Rachel Bloom gives her a pretty cool verve and vigor, balancing being a schoolyard bully and having a relatable insecurity which seats her in the “not totally evil” category. 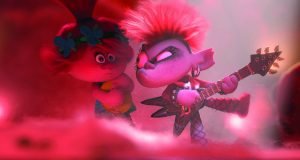 On the opposite end of the see-saw are returning voice leads Anna Kendrick and Justin Timberlake, jumping in right where Trolls and the following TV special “Trolls Holiday” left off. It even picks up a thread from the latter concerning Poppy’s inability to listen to others, but it’s obvious she still hasn’t learned from it. Once again, the ever-engaging Kendrick blasts Poppy with her patented spritely enthusiasm, while Timberlake’s appropriately less-excitable tones help ground this film with a more emotional core than just “happy all the time.” They give excellent rise to their respective characters’ arcs, even if it may be a little more than melodramatic at times.

Admittedly, having to see this on home screens takes away a little bit of the wonder the animation provides. There are scenes like the opening Techno dance party and the Rock kingdom’s giant arena which would look terrific on a large theater screen, both being exemplary sequences in a film full of outstanding visuals. There’s magic to be had here on all accounts, both in theme and execution, and it’s a quick and welcome shot of escapism for our current times. Even without a breakout hit like “Can’t Stop The Feeling!” and though its predictability is off the charts, there’s still something heartwarming about how Trolls World Tour extends its hand and invites you to go along with it.