Behind You is a curiously odd low budget experiment. This isn’t to say it’s a bad movie, so don’t take that the wrong way. On the contrary, writers/directors Andrew Mecham and Matthew Whedon have made an admirable and frightening sibling of James Wan’s The Conjuring, confining a family to a sprawling house and filling the movie with unbearable tension. Filled to the brim with cinematographer Benjamin Allred’s rich, sumptuous camerawork highlighting the gloom and doom of creepy Aunt Beth’s (Jan Broberg) house, Behind You works on a stunning visual level. 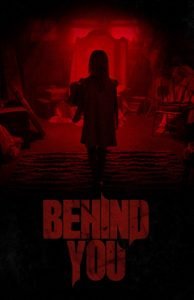 Its pacing is also crackerjack, moving us along from set piece to set piece, ferrying the story with palpable unease and terror. Post-title, we jump in to see two girls dropped off after their mother dies, moving in with their only remaining relative – the aforementioned Aunt Beth – when their father proves unreachable. Obviously, none of the three are happy at the prospect, but Beth coldly takes them in and lays down a few r/nosleep types of rules before sending them to clean up for supper. (If you’re a fan of horror, you should visit Reddit’s “No Sleep” boards. Guaranteed chills.) No one out of their room after 10, lights out at 11, don’t step foot outside your room at night, and never go in the basement or the study.

Of course, we wouldn’t have a horror movie if teenage Olivia (Addy Miller, most known to audiences as the very first zombie ever seen in AMC’s “The Walking Dead”) and little sister Claire (Elizabeth Birkner) didn’t break the rules, would we? As Claire is young and weak, it’s easy for the spirit haunting the house (which is never explained) to take advantage of her, writing messages which claim to be from her recently-deceased mother. Claire, so easily believing and wanting to see her mother again, follows the phantasm’s instructions to the letter, resulting in a total change of behavior toward Beth and her close friend Charles (Philip Brodie). 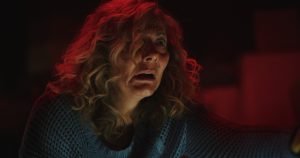 Beth’s not without her own problems, her teenage self (Caroline Labrum) seen with Charles (Sterling Evans) in the prologue as the only witnesses to the spirit grabbing younger sister Angela (Sienna Carlson) in the same house where she lives as an adult… and she’s put Olivia and Claire in the same room. So when Claire starts telling Olivia that Aunt Beth wants to hurt them, more sinister plot lines are revealed and the movie takes off running. Trouble is, it runs exactly where you think it will and doesn’t diverge from its routine path.

Overburdened by mouthfuls of exposition, Behind You takes its first missteps by being entirely too derivative to the point of extreme predictability. It’s almost a beat-by-beat amalgam of Mike Flanagan’s Oculus, the aforementioned The Conjuring, Poltergeist, and other haunted house classics seared into our brains over time. The other advantage these other films have over Behind You are actors who are allowed to be a little more natural with their delivery, something which escapes the cast here. Every. line. has. to. be. pointed. and. emphasized. to ensure the listener (and the audience) understand EVERYTHING, a tact which shakes us out of our suspension of disbelief.

It’s an easily-forgivable trait, as this film definitely makes you sweat (no, the heater wasn’t on) from the scares and the anticipation. As earlier stated, it’s a terrifically-constructed film, and the whole is greater than the sum of its parts. Those looking for something a little more edifying might turn elsewhere, but Behind You works its dread-filled magic mightily, an unexpectedly potent quick shot of fright from Andrew Mecham and Matthew Whedon.