Sometimes, it’s possible to be overwhelmed by being underwhelmed. Writer/director/star Edward Norton’s Motherless Brooklyn – apparently a passion project for him since first reading the novel upon which it was based – strikes this curious tone, wanting to mean more and showing marvelous work underneath its ho-hum surface. Much of this comes from the sporadic drop-in/drop-out of its characters and being ultimately unattached to anyone, including Norton’s own Lionel Essrog, a detective’s underling whose astounding photographic memory is balanced out by an extreme case of Tourette’s, affecting him with numerous physical tics.

Lionel is our Jake Gittes from Chinatown, our Ed Exley from L.A. Confidential, our touchstone through our descent into this film noir exploring the back alleys and city halls of post-WWII New York City. Swirling about him are his own detective agency counterparts, twisted governmental superiors, a genius engineer, and a beautiful young African-American woman caught in the middle. Relatively small field of focus, true, but Norton wants us to believe the story is more epic than it is, sending Lionel through a maze dotted by scant clues and innuendoes before finally reaching his desired reward. 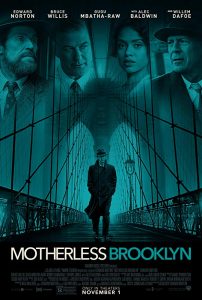 All the pieces are in place for a magnum opus. Daniel Pemberton’s evocative, moving score underpinning Dick Pope’s eye-catching photography. Fabulous-looking, period-appropriate production design, art direction, set decoration, and costuming which makes Pope’s frames look like they were shot in its native era. Actors who light up the screen with their well-known presences. But something’s not… quite right. We always feel like we’re waiting for another shoe to drop, for the next interloper who comes across Lionel, or for true intentions to be known. The film strings us further and further along, trying to mire us in conspiracy after conspiracy until we’re tired of waiting.

The opening scene tells us exactly how this movie’s going to operate. We meet Lionel and stay with him from minute one, watching him receive instructions from his mentor Frank Linna (Bruce Willis) and is given clues as to who’s behind whatever conspiracy is going on, but someone dies before the last word is given. This is the entire plot of the remaining film in a nutshell, with Lionel wriggling in and out of fundraisers and town hall meetings, stared at when his Tourette’s flares up and he can’t stop yelling “IF!”, and generally doing a pretty competent sleuthing job, if not for the miscellaneous beatings he receives.

What’s at stake: the possible uncovering of crimes committed by city developer-turned-Borough Bridge Authority head Moses Randolph. As he’s played by Alec Baldwin, this “real estate magnate elected to some form of public office” role will seem a bit on the nose these days. Moses is a smarter, more capable, lethally conniving version of the person Baldwin lampoons on “Saturday Night Live” from time to time; the things he says and does are almost lifted straight from today’s headlines. Welcome to the world of post-Election Day 2016 cinema, where filmmakers are taking out their frustrations on latter-day concerns through art. 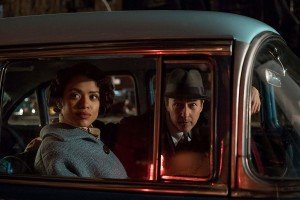 There’s something more sinister at the heart of this conspiracy, though, and Frank’s cryptic parting words set off Lionel’s search for Laura Rose (Gugu Mbatha-Raw), an anti-Randolph activist trying to stop his displacement of lower-income housing residents (read, in this film’s terms: brown people) so he can put up another bridge to NYC. Mbatha-Raw puts her all into this passionate, vibrant woman caught in gunsights aimed at her by government agents, the racism and misogyny of the times, and a terrible truth which threatens her existence. She manages to outpace how much we care for Lionel because of her plight and strength; it’s a strength given through Mbatha-Raw’s captivating performance.

Norton tries to hook us with twists, turns, murders, and a “what does it all mean?”-ishness, but there’s something keeping us from biting. It’s not that there’s a problem with the story; it’s in how these twists and turns have the opposite effect of surprise. We’re hit with revelation after revelation in the early goings, the sleuthing strays from interesting to meandering, and the almost-overabundance of characters we have to meet so they can wind up becoming Chekhov’s Gun start piling up. The rabbit holes which Lionel climbs into and follows start to braid together until we can barely follow each strand; we don’t know what he’s trying to solve after a little while, and it’s thankfully recapped for us before the final hammer falls.

The theme of displacement doesn’t just show itself in Moses’ machinations and endgame; it is this film’s very soul. Its lead character receives his nickname “Motherless Brooklyn” after his mentor hires him as a 12-year-old out of an orphanage. Laura’s parents may not be who she thinks they are. A rich person is seen to live in squalor, fighting to get his way back into high society. Lionel’s nervous tics alienate him from other folks. No one is where they should be due to circumstances beyond their control, and the trouble is that no one can do anything about it. Maybe it’s this kind of despair Motherless Brooklyn doles out like so much candy on Halloween which makes it hard to pin down. 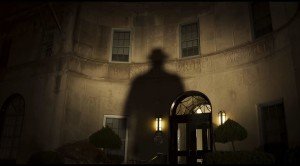 Or maybe it’s the cavalier way Norton’s screenplay foists a quick, one-note exposition – be it character or plot – before marching straight ahead, forgetting what he exposed until a more convenient time. We meet someone whose quick life and death tell us nothing about him, yet he’s supposed to be important to the proceedings. We spend time with one of the film’s more interesting characters and are never given his name; it’s only after he disappears and pops back in near the end that we infer who he might be. It’s as if the story knew how to begin and end, but the points between don’t always go in sequential order, growing more and more convoluted to the point of exasperation.

Through it all, we want to focus on Lionel, but Norton doesn’t hang us on much more than his hearty performance as a “freakshow” (the film’s words, not mine). Lionel’s capable, but his own misgivings about himself made worse by his uncontrollable reaction to stress get the best of him, and Norton plays this angle with a respectable effort. One expects this affectation to be somehow more integral to the plot rather than an often-used humor pump, but as mentioned before, Lionel cannot have his recall ability without it. You’ll almost be able to predict how this part of him will be dealt with by the end of the movie, which is probably the only predictable thing in this dodecahedron of a film trying to pass itself off as a normal six-sided die.

Motherless Brooklyn is not a waste of time, nor is it as grand as it thinks it is. It reaches for excitement, danger, and thrills with a muted grasp, as if it wants to have plausible deniability of possibly wanting to have all of those attributes. When every scene feels like the biggest! reveal! yet!, we’re eventually worn down by the time the true climax rolls around and becomes a non-event. Although it’s buoyed by gutsy performances and a powerful score featuring the likes of Wynton Marsalis, Thom Yorke, and Michael Balzary (you know him as Red Hot Chili Peppers bassist Flea), this gumshoe detective story has no discernable kick or flavor, even though its ingredients would’ve made a more substantive dish in another chef’s hands.