Posted by Eddie Pasa on August 29, 2019 in Movie Reviews / No Comments

Full disclosure: I am the parent of a special needs child, so I view these kinds of movies with a little more of a critical eye than most. I hope you understand.

Welcome to my second unstarred review, where a film does good work amid tremendous problems. It’s in a place where a middling rating won’t begin to cover the depths of this dichotomy, and neither a good or bad rating make the film either a recommendation or an instant ignore. The first of these was Trolls, which I felt was a little too saccharine about its “happiness is awesome, sadness is bad” theme, yet featured good voice acting, kind morals, and a kickin’ soundtrack.

While The Fanatic may not fare as well in the latter two categories, it does just fine discussing a problem long plaguing celebrities: the super-fan. You know – the one who demands that a certain superstar follow them on social media, gets angry when they don’t Tweet back or acknowledge their presence on Facebook, and uses modern technology to make celebrities’ lives a living hell. To a large portion of society, actors, musicians, and other entertainers are doing a job no different than the ones you and I show up to every day, reporting somewhere for an agreed-upon time where they are to perform to the boss’ expectations. They go home at the end of it and receive a paycheck for their efforts. 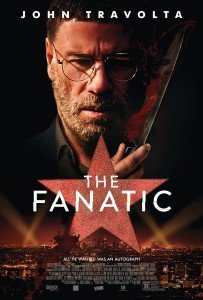 The line between spectator and participant has blurred with the advent of instant-gratification communication services like Twitter and Facebook. It’s not a stretch to infer film, sports, TV, and other entertainment sectors have been using these applications to inform their filmmaking and output, measuring their metrics and going with what would sit well in the “Trending Now” sidebars. By this reckoning, the audience has now become the ex-parte filmmaker, with movie studios going out of their way to appease these keyboard cowboys who only want to see what they want, good cinema be damned.

It’s here where we find Moose, a cognitively-impaired older man living in Hollywood played thoroughly by John Travolta. We’ll come onto the cognitively-impaired bit in a little while, but for a man with a nine-year-old’s grasp on reality, he’s doing surprisingly well. His job – impersonating a Scotland Yard inspector on Hollywood Boulevard – seems to be netting him the cash necessary to keep an apartment which houses an ungodly collection of horror film memorabilia. He’s even paid top dollar for some of these items, most notably those pertaining to Hunter Dunbar (Devon Sawa), Moose’s favorite horror movie hero.

To Moose, Hunter’s merely a product, someone there solely to entertain him. His dream sequences feature Hunter swathed in a spotlight’s luminescence, while every other person in the room fades away until it’s only those two together, with Hunter beckoning for him to approach and to be his friend. What Moose doesn’t see – and, more importantly, doesn’t get – is Hunter’s private life, the fiercely guarded side which warrants him to pay child support, split custody of his son, and live behind hedgerows to maintain his privacy. Moose doesn’t care about that; he only wants what he wants – his chance to stand in front of his idol and profess his admiration while getting his expensive, newly-bought, screen-used-by-Hunter-himself vest signed. 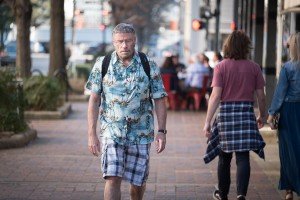 The way Moose sees it, Hunter owes him everything – an autograph, friendship, maybe even love. After all, he’s the fan – without him, Hunter’s nothing, right? Well, here’s the thing: Hunter doesn’t put up with that kind of fandom. Not one bit. And after Moose gets a little aggressive in his autograph-seeking, Hunter shoves him away figuratively and literally, treating Moose to a threatening side of Hunter he wasn’t expecting. It gets worse when Moose’s paparazzi friend Leah (Ana Golja, whose character provides narration throughout) lets him know about an app which reveals the locations of movie stars’ homes, which he uses to find Hunter’s house so he can tell him what he really thinks. (Those of you with quick eyes, take note of the names the app displays.)

Hunter’s not a saint; he’s just a guy wanting to maintain the line between work and home. He’s good with his son, but he’s a bit of a bastard in other parts of his life. It’s hinted he’s had previous dalliances with his housekeeper, and he doesn’t exactly treat his gardener quite right. Being protective of his personal life, he regards everyone as a threat, including Moose; he doesn’t take the time to fully understand the type of person Moose is, but why should he? When Moose turns up at his driveway gate, that’s a serious breach of protocol which needs to be dealt with appropriately. But the rancor which Hunter showers upon Moose borders on the psychotic; a phone call to the police should have solved the problem, but we get a sense that Hunter may have a slight hero complex driven by the types of characters he plays.

Which leads to the crux of this film’s problems: extremity. Writers Fred Durst (who carries directing and story credits) and Dave Bekerman don’t take any middle roads in their skewering of celebrity life and toxic fandom, offering us two types of people – an intellectually and emotionally stunted man opposite a Hollywood fake. Is Moose the type of person the entertainment elite think their fans are – entitled, childlike scavengers who don’t know the difference between reality and fiction? And is Hunter their dearest example of what we think of actors, hiding behind their fences and gates, stepping on people who they claim to appreciate? 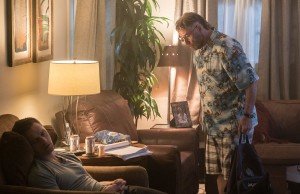 Writing Moose as cognitively disabled and being played by a Hollywood legend makes me seriously consider this movie’s goal. There’s nothing funny about Moose’s condition (to the film’s credit, no comedy is mined from this), and making a cognitively-impaired man the proxy for fandom – and the only example of fandom in the film – is loathsome. Especially when you consider the severity of Hunter’s retributions for Moose’s repeated and escalating invasions of his privacy. It’s uncomfortable as hell to watch because the film’s tragic onus is on both Moose and Hunter – Moose for not staying away after multiple instructions, and Hunter for looking at and treating Moose as less than human.

I’m at odds with this film because in spite of all the problems listed above, John Travolta sheds all of his Hollywood might and dives right into Moose, playing him with incredible care and nuance. As broadly-written as this script might be, Travolta doesn’t make a caricature of Moose or objectify him; he gives Moose a natural meekness, playing against any kind of character he’s had from the last 25 years. He breathes an authenticity into Moose through his mannerisms which makes us sympathize with him, but we’re almost instantly repulsed by the script-dictated actions he undertakes. Even though the film’s objective and metaphor may be suspect, Travolta stays incredibly respectful of those with special needs, and it’s a hell of a performance amid dubious trappings.

The same goes for Devon Sawa. He’s given a big sandbox in which to work, and he doesn’t miss a chance to play it up big. Through the script, Hunter is forced to spin on a dime in almost every scene, from friendly actor to protective parent, from ladies’ man to humbly rejected, from aggressor to victim. Sawa’s range is something to behold; combined with Travolta, their star power may have hooked us, but it’s their skill which keeps us watching, even when the film turns to the drastic and outrageous. 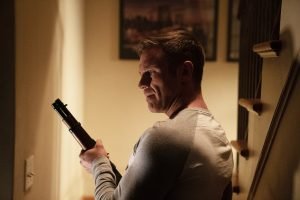 Questionable script aside, Fred Durst has hit another level with his filmmaking. He drives The Fanatic into the places where our demons come out and cloud our mind with fear, making us squirm with discomfort at the push and pull between Moose and Hunter. The obligatory Limp Bizkit needle-drop might threaten to take us out of the movie, but he also brings in LB guitarist Wes Borland to punctuate Moose’s journey with punchy hand drawings and artwork. Durst pushes Travolta and Sawa to their limits and reaps fantastic performances for Conrad W. Hall’s cameras to capture. It’s no surprise The Fanatic has a David Fincher-like feel in its chiaroscuro-laden photography, what with Hall having worked with Fincher several times; Durst uses this to the film’s advantage, bringing a noir-ish vibe to this stalker fantasy.

But how does one reconcile a film which fires on its technical, visual, and acting fronts with its detestable premise? A performance like the one Travolta gives here should not go unseen, but at what price? Without a doubt, the use of the cognitively-challenged in this manner is revolting, and one has to wonder what the reason is behind this decision. Were Moose to have been a man without special needs, it would have perfectly described the current crop of the kind of ridiculous fandom who believes they’re the ones in charge of the movies, not the studios or the actors, and it might have meant more. By making him a man who can’t relate to the world normally because of his nature, The Fanatic punches down, and terrifyingly so during the final thirty minutes, where both Moose and Hunter get what they want, even if it means blood spilled.