Posted by Eddie Pasa on August 14, 2019 in Movie Reviews / No Comments

It’s a tough thing trying to find your voice. From first babbles as an infant, to the raging teenage struggle to be heard, to further shouts into the eternal void, establishing one’s own identity through any kind of expression begets a lot of pain and angst. Mostly toward the people you wish would listen to you the most: your own family. The teenager at the heart of Blinded by the Light is no different in this endeavor; the problem is that the pain is exacerbated by a multitude of external forces just waiting to pick him apart to leave him shredded in the gutter. 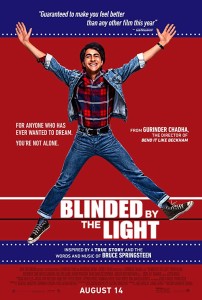 But when one finds their voice, like Javed Khan (Viveik Kalra) does through the words of working-class hero Bruce Springsteen, the world starts to make more sense. This is when the utter joy which is embedded with such clarity and spirit into the bones of Blinded by the Light comes raging onto the screen. A heartwarming story of self-discovery, tangling with and accepting tradition, and the promise of dreams fulfilled is made manifest through stunning performances and the perfect soundtrack: Bruce Springsteen’s music, which was – according to a Q&A I attended with director/co-writer Gurinder Chadha – generously and happily given.

The film is the epitome of working class, centering on a Pakistani family caught up in England’s economic and racial tensions of the late 1980s. Much like Chadha’s 2002 comedy Bend It Like Beckham, the clash between tradition and the future takes center stage, focusing on the family’s only son and his fight for his identity. He wants something else out of life other than being a cog in his father Malik’s (Kulvinder Ghir) house and put on the path his father has predetermined for him – a life of work and no time to even so much as smile or enjoy oneself. But Javed’s writer’s talent is screaming to be released into the world, and it gets a jumpstart from listening to Bruce Springsteen for the first time. His soul is unleashed by the heartache and want of Springsteen’s lyrics and voice, and we all know how powerful that can be. Is it powerful enough to repel Malik’s pressure to be just another workingman with no zeal for life itself? 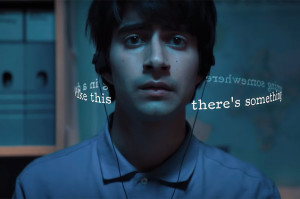 Based on Safraz Manzoor’s memoir Greetings From Bury Park: Race, Religion and Rock N’ Roll, this jukebox musical spits and churns its way across the tumultuous minefield of young adulthood. It’s a growth which comes during and because of the dire climate of the time, which makes every moment in this film feel earned through blood and sweat. Chadha makes every scene pull at or break our hearts, tying us to the film’s characters through universally shared moments. Feeling the doom of the life your parents want you to have when it’s not anything you want, first loves, unexpected friends, terrifying troubles, and listening to the music which shook your very foundation for the first time – this movie is a mixtape of these snapshots which starkly defines our humanity.

The film’s look also adds heft to Javed’s life, with much of the film tinted in a faded, greyish tone, underlining the bleakness surrounding him. But it’s not all gloom, as fuller color is reintroduced during scenes where we see Javed unburdened, where his dreams are still within reach and possibilities aren’t killed before they’re even pursued. As this film’s anchor, Viveik Kalra portrays Javed perfectly, rising on a believable gradient from timid to confident. It’s a wholly natural performance, seething with the friction between family obligation and choosing his own destiny. 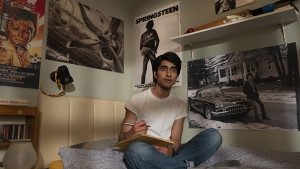 Almost besting him is Kulvinder Ghir, who bears the dubious honor of being Javed’s antagonist. However, the script isn’t trying to make him a villain; he’s just a man trying to look out for the safety and wellness of his family, and Ghir’s devotion to this balancing act is, quite simply, art. We’re caught between our vehement dislike of his methods and appreciating the wisdom and courage he displays in trying to guide his family the only way he knows how. He came to England to find a better life, but it hasn’t worked out, and the fight-or-flight response leaves no room for such frivolities as the music sung by the unshaven man in the posters that adorn his son’s walls.

That this film is inspired by true events makes it all the more incredible and rapturous, giving hope to those in similar situations. Blinded by the Light isn’t just Javed’s or Sarfraz’s story; it’s all of us just wanting those we love to accept who we are. The themes of Springsteen’s galvanizing everyman lyrics are all at once the car, the key turning the engine on, and the gasoline which powers it. And when Javed pushes the pedal to floor, our only option is to watch its unbridled spirit wash over us with the fire and passion of a life ignited.