How To Train Your Dragon: The Hidden World – Review

It’s been a pleasure watching Hiccup Horrendous Haddock III (Jay Baruchel) grow. Formerly the awkward, misfit son of a village chieftain, he’s found his place in their little Viking microcosm of Berk as a dragon master. As life evolves for him, he’s constantly thrown into different roles with little time to react or find sure footing, but with the help of his friends and family, Hiccup finds a way to get the job done. 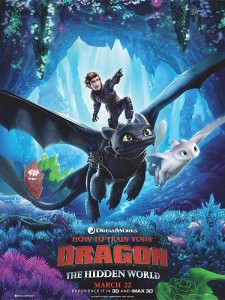 Surely, the Hiccup who narrates the opening of 2010’s How To Train Your Dragon would be astonished at the Hiccup we see in the first frames of How To Train Your Dragon: The Hidden World. Gone is his tentative insecurity about something as little as setting foot outside his front door; we see him as the man he’s earned the right to be, complete with a flaming sword and his Night Fury pal Toothless by his side. He’s become a charismatic, resourceful leader, having been quick-marched into the position by his father’s all-too-sudden death and taking the mantle with as much humility and strength as he can muster.

Just as important is his friendship with Toothless, the dragon who changed the trajectory of Hiccup’s – and Berk’s – life as he knows it. We’ve seen their bond go beyond starting out as strangers, transitioning to friends and entrusted family members in How To Train Your Dragon 2. This time out, it’s plain to see one cannot live without the other, with Toothless almost becoming a foster son of sorts, experiencing the need to explore and fly away from Hiccup.

How To Train Your Dragon tackled the fickleness of childhood; the second followed with the theme of early adulthood; this third installment finds us looking down the barrel of parenthood. Hiccup becomes something for which he’s completely unprepared: a single dad having to deal with all the stumbles and triumphs one endures as their child grows up. It’s something he recognizes, especially after Toothless finds and takes an interest in his exact opposite – a white-scaled female version of his exact species dubbed a “Light Fury.” Of course, he doesn’t know the Light Fury is a pawn of Grimmel the Grisly (F. Murray Abraham), a cunning dragon hunter headed straight for Berk, now an overpopulated haven for his type of game.

Viewed as how we see things when it comes to our children, Grimmel represents what Cat Stevens called the “wild world” which crushes souls and (figuratively and literally) kills whatever it touches. He’s the danger we warn our kids about when we tell them to look both ways when crossing the street, or when we demand they not get in strange cars; he’s the kidnapper waiting out of our lines of sight. And no matter how we fear what’s waiting out there for them, we know they’ll have to eventually go into it, hopefully with their heads held high and full of the wisdom we’ve given them. This is why the entire How To Train Your Dragon trilogy touches the heart in more ways than expected; it’s a fully flawed acknowledgment of the imperfections of growing up which doesn’t shy away from the anguish life causes us.

The titular Hidden World isn’t only metaphorical for what kids think adulthood and parenthood might be; remember, this is a children’s film we’re talking about here. Hiccup recalls stories his father Stoick (Gerard Butler) told him of a legendary place where dragons come from, and the film does not fail in showing it to us. Once again, writer/director Dean DeBlois and his animation team make our eyes dance with color and wonder, giving painstaking detail to both the earthbound and the extraordinary. When we’re brought into this mythical lair, we cannot help but be awed by the imaginative and breathtaking views afforded to us.

The cast, most of whom we’ve been with since the beginning (T. J. Miller’s Tuffnut is now voiced by Justin Rupple), has aged right alongside their characters, using their years to imbue their on-screen counterparts with the burden maturity heaves upon us. (Well, except for the comic relief folks whose sole purpose is to stay decidedly immature.) Granted, only six or seven years have passed in the trilogy’s timeline; to us, they’re welcomed back as friends we haven’t seen for a while. As this is definitely Toothless’ film, much of the cast gets put on the backburner, making hasty but memorable entrances and exits when called upon to push the story or Hiccup into action.

Much of the weight falls to Jay Baruchel, whose Hiccup has been our eyes into these fantastic events for the last nine years. He’s grown far away from that timid little boy who misguidedly shoots down the dragon who would later become his best friend. As the films progress, so does the strength which Baruchel lends to Hiccup, giving him an excellently subtle mix of confidence and trepidation. Hiccup’s not the brute-force kind of leader; he’s more about what’s best for everyone, including his enemies. Baruchel’s voice is perfect in intimating this tone, being at once assured and a little bit scared of the unknown.

Dean DeBlois goes all-in by saving this emotional powerhouse for last, amplifying its impact with riveting animation and voice performances worthy of this trilogy-closer. We’re granted the loveliest of send-offs for Berk, her citizens, and their dragons; we’re also gifted a heartfelt goodbye a boy finally stepping into the shoes his father left for him. How To Train Your Dragon: The Hidden World is an ebullient and poignant final chapter, with childhood growing pains giving way to the struggles of adulthood. Few children’s film franchises progress its lead character in such ways; DeBlois has done it right, paying respects to all of the whimsy, frustration, joy, sadness, and hope which lie within.