Posted by Eddie Pasa on December 3, 2018 in Movie Reviews / No Comments

Picture a film with the seriousness of Merchant-Ivory displayed with Stanley Kubrick’s reality-warping cinematography and spiked with a streak of the kind of dark comedy which made you bark shocked laughter when you saw what happened to Brad Pitt’s character in the Coen Brothers’ Burn After Reading.
Hell of a concept (and a run-on sentence), yes? This, in a nutshell, is Yorgos Lanthimos’ The Favourite, a fast-paced, stunning period drama-comedy. 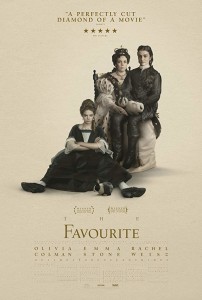 Minutes in, you start to feel like, “Am I supposed to be laughing at this? Is this a comedy?” Rest assured, it is a black comedy which Nigel Tufnel from Spinal Tap would give the “none more black” superlative. It’s not a slapstick or Zucker Brothers kind of overt silliness; it’s driven by human cruelty and the collateral damage which arises out of people backhoeing each other in a desperate attempt to get what they want. Eighteenth-century palace intrigue and social climbing doesn’t sound like something you’d readily laugh at, but that’s where we find ourselves.

This eight-chapter string of vignettes piles machination on top of manipulation repeatedly and thoroughly until what started as a slow-stewing pot bubbles and froths its way into a hellacious boil. And when it does, it won’t matter who gets scalded or who deserves it more.  No one’s an angel in this movie, and as Clint Eastwood once said in Unforgiven, “Deserve’s got nothing to do with it.” 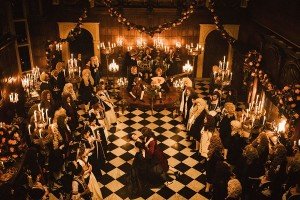 The unholy triumvirate of a queen, her best friend/adviser, and the social climber who gets between them makes for elegant and stirring watching. Queen Anne (Olivia Colman), Duchess of Marlborough Sarah Churchill (Rachel Weisz), and Abigail Hill (Emma Stone) form the ultimate 18th century girls’ club, with all the power of a country behind them. Anne’s in declining physical health, needing Sarah to constantly point her in the right direction, from policy to makeup choices. Weisz plays Sarah as having a lot of cards held close to the vest, constantly making computations with every conversation to keep Anne one step ahead of everyone else in the room. It’s an engaging performance, with us hanging on what Sarah’s next actions will be to save the crown or herself from every looming jam headed their way.

Seeing the friendship between the two gives you an immense history of their affinity toward each other. They refer to each other by the nicknames Mrs. Morley and Mrs. Freeman out of earshot from anyone else, including the palace help; they scold one another brutally, yet always find a way back to a more calm state; and playful jibes – as well as physical intimacy – are thrown back and forth like a bouncing ball. Both Colman and Weisz carry themselves with the air of old friends, displaying a chemistry found in the greatest of on-screen duos and just as volatile as the most antagonistic of them. 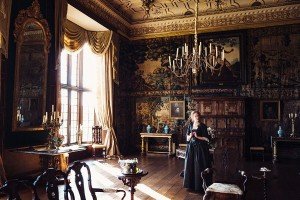 Of course, no one expects Abigail, a meek girl whose father gambled away his fortune, to be anything of a bother. This former lady is relegated to the life of a lowly scullery maid, cruelly teased by the same women she has to sleep with in a writhing pile of flesh every night. So when she sees an chance to advance herself into Anne and Sarah’s favor, she seizes it like a child with a shiny toy, working every last ounce of goodwill out of it, even if it comes at her own expense. Without great risk, there can be no great reward, as we see her vault herself out of serving wench clothes and into personal maid dresses, occasionally enjoying trapshooting with Sarah and personal time with the Queen.

Each woman is a force to be reckoned with. Queen Anne is losing agency over her body and domain, and some of her illness carries over into how she comports herself, making her an unpredictable wild card. Attempting to guide and control her is Sarah, who fights at every turn for what she feels is right for England, even if it’s not what her friend wants. It’s not just the Queen she has to contend with, as Abigail’s trying to step her way out of the maid business and back to being a lady; it’s her only goal in the film, and she’s going to stop at nothing to get it. 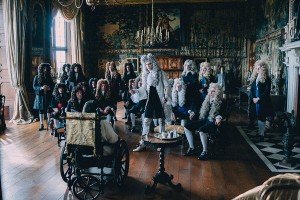 You can readily see how explosive this entire situation is, and we haven’t even brought the scheming Robert Harley (Nicholas Hoult) into the conversation. Wily and easily-perturbed, yet cold as liquid nitrogen when he needs to be, Harley sees through Abigail’s façade and uses it to his advantage. Hoult makes Harley into a despicable creature of opportunity, intending to hold his power like the Sword of Damocles over Abigail. However, as I said earlier, machination is piled over top of manipulation throughout this whole movie, and you’re left wondering where the power truly lies.

Director Yorgos Lanthimos creates a virtual time-tunnel to 18th century England, using natural light and wide-angle lenses to capture every last detail and nuance. Shot on location at Hatfield House in Hertfordshire, England, Lanthimos makes excellent use of its large spaces, engulfing and dwarfing the actors with an overbearing feeling of solitude, which plays into the leads’ desperate attempts at connection over vast figurative chasms. The production design and costume design aren’t overly sumptuous, becoming part of the character of the film without being ostensible. We’re not meant to be distracted from the character drama unfolding before our eyes by what everyone’s wearing, giving every aspect of these designs a lived-in, used feel and adding a heightened realism to the proceedings. 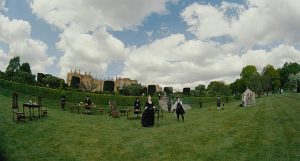 What the camera, the actors in front of it, and the adornments it captures ultimately speaks of is the suffocation of the soul by power. As the old saying goes, “Absolute power corrupts absolutely,” and The Favourite shows how damning it can be to even those who profess to love each other. Colman, Weisz, and Stone give stunningly multilayered performances which never fail, being enchanting and maddening all at once. It’s a magic show where the Prestige is wrought through actions of self-preservation; with each successive act, a little bit of everyone is lost, even the seemingly happy. Undeniably one of 2018’s best, The Favourite possesses a dark heart masquerading as a bird in flight; its unforgettable spirit will stay with you long after.