The Forest of the Lost Souls

Posted by Eddie Pasa on August 3, 2018 in Movie Reviews / No Comments

Author’s note:
Mentioning anything beyond what I’ve mentioned here constitutes spoilers. The Forest of the Lost Souls is best discovered and experienced without its surprises divulged, so please excuse my lack of detail and specificity. Thank you.

The Forest of the Lost Souls (original Portuguese title: A Floresta das Almas Perdidas) packs a mighty wallop in its short 70 minutes. Its minimalist approach to its black-and-white photography, direction, and script do more damage in its runtime than most try to do in films lasting more than two hours. 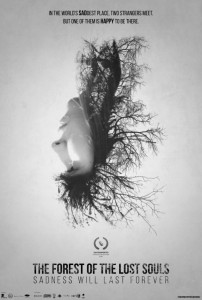 There is absolutely no fat in writer/director José Pedro Lopes’ brutal attack of a film, creating suspense and horror with Francisco Lobo’s straightforward cinematography and well-timed musical jolts by composer Emanuel Grácio. What Lopes excels at creating is a troubling sense of despair, followed by a pulse-quickening atmosphere of maddening tension. He does this by keeping his subjects to a minimum with the least amount of dialogue possible, barely allowing his characters to establish themselves.

The first two people we meet go unnamed, merely letting their shared circumstance drive their limited conversation. Circumstance, you might be asking? These two find each other in a forest similar to the Japanese Aokigahara – the famed “suicide forest.” No specifics about its location – or any location in the film – are given; all you need to know is what Ricardo (Jorge Mota) and Carolina (Daniela Love) tell each other about the forest. People go to kill themselves there, and some go undiscovered to the point of desiccation, as they both discover during their walk. 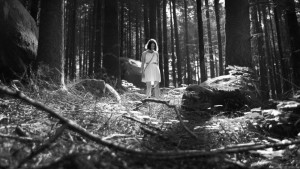 Jorge’s there because his daughter walked into these woods to the glacial lake within and never came out. He feels he’s failed her, along with his surviving wife and daughter, and he’s convinced himself they’re better off without him. Carolina is a frequent visitor to this spot, intending to die but somehow finding a reason to walk away every time. She tries to reason with Jorge, even going so far as to convince him he’s not ready to follow through.

This prolonged tête-à-tête spawns the rest of the film, which is best left unspoiled. Lopes turns the film on its ear and goes straight into the unpredictable, devising machinations for a psychopathic killer straight out of John Carpenter’s Halloween (which this film owes a great debt). It’s a wily game he plays with us, drawing out the suspense of a stalker waiting to pounce. Glimpses of the killer around corners, hiding in shadows… he puts us on edge with every footstep, every missed glance, and every one of Grácio’s stings vibrating at us on the soundtrack. 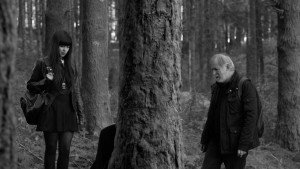 Lopes’ timing between shocks is buffered by a slower pace, showing us the routines of daily life outside the forest. He relishes drawing the figurative gleaming knife from its sheath, hesitating to even show it to us before driving it into our chests. The Forest of the Lost Souls works because of its simplicity. We’re not burdened with an expanse of backstories and exposition; Lopes is here to give you a conflict, propose a reason for it, then leave you to witness the terrifying consequences.