Posted by Eddie Pasa on August 29, 2018 in Movie Reviews / No Comments

Turn on today’s news channels, you actually see the words “Nazi” or “white nationalist” on a chyron at the bottom of the screen. We seem to have forgotten everything our men and women fought and died for in World War II, and Nazis – people who actively want racial purity and to stamp out those who differ – are once again a part of the sociopolitical landscape.
In 2018… in America. 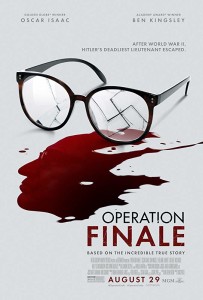 Almost as a timely reminder of the humanity lost in the concentration camps and gas chambers in the 1930s and ‘40s, Chris Weitz’s Operation Finale comes streaking into theaters. It’s a well-intentioned film dramatizing the search for and capture of the escaped Adolf Eichmann, reputed planner and overseer of the “Final Solution” – the systematic liquidation of millions of imprisoned Jews. There are no surprise endings, no straying from documented fact; Eichmann’s story is widely known and easily looked up on the internet, if you want to know the ending of the real Operation Finale.

What Operation Finale tries to do is conceptualize the taking of Eichmann as a heist film with dash of The Silence of the Lambs thrown in for flavor. Weitz has chosen to keep the thrills to a minimum, focusing instead on the interpersonal and internal conflicts borne by its participants. It’s a dry, low-key film which doesn’t aspire to have stroke-level tensions, but often feels like it wants to push in that direction.

Instead, we see an almost sympathetic treatment of Eichmann, who claims he was merely a paper-pusher following orders. Sir Ben Kingsley plays Eichmann as nearly undisturbed by the sheer destruction and terror he and the Nazis perpetrated during their nightmarish hold on Europe. It’s not a flip or insouciant performance; it’s more rooted in a “certain jobs must get done, and I did them” kind of ethos. Kingsley also gives him the soul of a man who longs to be with his own, be it family or political associates. 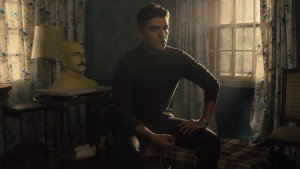 Living in Argentina under an assumed name and protected by Nazi sympathizers and the dominant right-wing Tacuaran government, Eichmann works at the local Mercedes-Benz factory, riding the same buses every day to work and back. His wife Vera (Greta Scacchi) and son Klaus (Joe Alwyn) live with him in his isolated rural home, a forbidding fortress-like structure. Klaus has just met the lovely Sylvia Hermann (Haley Lu Richardson), whose Jewish father Lothar (Peter Strauss) winds up being the one who reports Eichmann’s position.

By contrast, we find Mossad agent and Nazi hunter Peter Malkin (Oscar Isaac) in bustling Tel Aviv, jauntily kicking soccer balls around with neighborhood kids before having a quiet meal with his mother. After a botched takedown early in the film, he’s kicked back to remedial duties, passed over for the chance to join the team intent on Eichmann’s capture. He’s seen as more of a grunt instead of an intelligence officer; however, he’s smart enough to finesse his way onto Mossad chief Isser Harel’s (Lior Raz) team, on the condition that he brings his ex-flame Dr. Hanna Elian (Mélanie Laurent) as the team’s medic.

Elian and Malkin’s relationship is almost like that between Martin and Liz from 1992’s Sneakers (oddly enough, a heist film also starring Ben Kingsley). They rue their past, but they’re playful and supportive of one another in the present. After nearly botching Eichmann’s abduction, she counsels him in his dealings with Eichmann. There’s a lot of forced will-they-or-won’t-they attempting to add another layer of tension to the film, but it’s not involving enough for us to care. 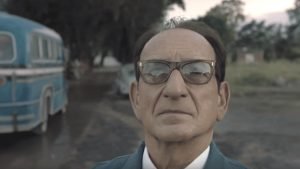 Which leads to the film’s major downfall: a lack of involvement. Everything is laid on the table; nothing is left to our imaginations. Everyone is taken at face value, and all the standard heist film character tropes apply. The soft-spoken second-in-command, the gruff team leader, the by-the-book interrogator, the team’s muscle who favors simple killing instead of wasting time on extraction, the homely accounting nerd, and the burly idiot are all here, padded out by a few lesser characters serving as potential bullet fodder.

The main focus is on how Malkin finds his way into a room with Eichmann himself. A Holocaust survivor alone with the man who gave the orders to kill his people. The ticking clock the Mossad agents find themselves under barely matters; it’s just a device to keep the days moving and the danger of the Argentine pro-Nazi Tacuaran movement closing in on their safehouse in our consciousness. Malkin and Eichmann are a powder keg in and of themselves, almost analog to Clarice Starling and Hannibal Lecter trading information for the film’s ultimate goal.

It’s in these exchanges that the film is laid bare. There are always three sides to every story – yours, mine, and the truth – and we get a whole lot of the first two. The quid pro quo game Eichmann plays with Malkin results in the humanizing of Eichmann, even though we never know if he’s saying whatever he can to get out of his predicament or if he’s sharing an honest moment. We get right down to the specters haunting Malkin’s soul, which Eichmann uses to game his way into favor. Both Isaac and Kingsley play against each other with the subtlety not afforded to the rest of the film, making these scenes magnetic and dynamic as desperation sets in on both their parts. 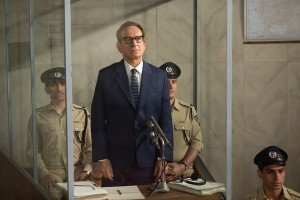 Laurent holds her end up well, being the squad’s medical facilitator and playing a large role in how Eichmann is spirited away. However much Elian might be written as one-dimensional, Laurent breathes a spark and levity into an otherwise level film. The surprise of Operation Finale might well be comedian Nick Kroll as Harel’s right hand man Rafi Eitan. Most known for his goofball roles in various TV shows and films, Kroll is at his down-to-earth best, never once betraying the seriousness of his character’s part in this harrowing scheme.

For a film about one of the most daring exploits resulting in the arrest of a major war criminal, Operation Finale feels way too safe. Its motives and machinations are too overt, refusing to keep the viewer in thrall. Even the film’s sole PG-13-worthy expletive feels perfunctory, delivered with all the force of a battering ram. Matthew Orton’s script feels more at home on a stage, where a more nuanced approach could have yielded a greater depth and feeling. Instead, we’re left with what feels like a simple retelling of a Wikipedia article given a Hollywood punch-up.