Posted by Eddie Pasa on August 2, 2018 in Movie Reviews / No Comments

We’ve seen the themes of Christopher Robin before in countless films about parents who just don’t have the time – or the soul – to share with their families. They’re breaking their backs at work, tasked with important and impossible things! Who has time for vacations and reading books to their children at bedtime? The obvious comparison is Steven Spielberg’s Hook, which Christopher Robin follows almost beat-for-beat. But there’s a welcoming, softer edge and more whimsical bent to Christopher Robin. This fairytale of grownups rediscovering the magic of childhood and translating it into their present-day lives is a more soothing balm as opposed to Hook’s out-and-out adventure. 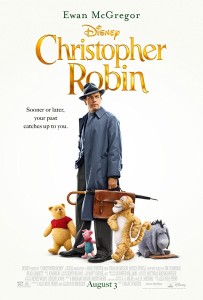 It’s made so by the timid-yet-strong voice of Jim Cummings (who has voiced Winnie-the-Pooh since 1988) and Ewan McGregor’s kind performance as the adult Christopher. Together, they anchor the film – much as their characters do in A. A. Milne’s books – with an unyielding sweetness full of the brio which fills the lives of the young. Alex Ross Perry and Allison Schroeder’s screenplay sets us in the pre-World War II era, thankfully sparing us from modern-day derision (see my review of Peter Rabbit on how “updates” aren’t necessarily great) and making us feel like we’re settling down after a hard day and being read a story to both inspire and relax us.

The film begins in the closing moments of Milne’s “The House at Pooh Corner,” which finds Christopher Robin (played as a child by Orton O’Brien) leaving the Hundred Acre Wood for the last time as a child. Cinematographer Matthias Koenigswieser captures this passage into boyhood during the magic hour, with the sun setting on both the Wood and Christopher’s time in it. It’s a beautiful, bittersweet parting, this shedding of childish things; this final goodbye between Winnie-the-Pooh and Christopher is gentle and loving, harking back to a time when imaginations and ideals were simpler. 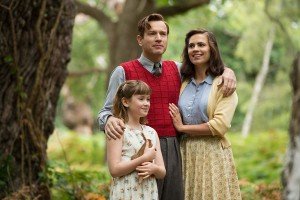 We’re shown a montage of Christopher’s life after leaving the Wood; he attends boarding school, suffers the loss of his father, becomes a young man, meets and marries Evelyn (Hayley Atwell), and leaves her pregnant to fight in World War II. Returning home after three years away, he’s greeted by Evelyn and their daughter Madeline (Elsa Minell Solak); both Christopher and Madeline are unsure how to proceed with life, but they make it through somehow. Which leads me to what I consider the film’s crux, although it’s never made crystal clear: Christopher’s post-traumatic stress disorder.

Close to the end of this opening credits montage, we see he’s sunk neck-deep into his work; at one point, he closes a door on Evelyn and Madeline (played as an older child by Bronte Carmichael) begging him to come dance with them. He races from deadline to deadline as an efficiency expert at Winslow Luggages, practically folding when he’s told his reductions in costs aren’t enough, putting him in a position to cut jobs to save money. Christopher hasn’t stopped running from the bombs or trying to save people; he’s still doing it in his everyday life, sacrificing time with his family in order to keep people working.

This is where all comparisons to Hook should end. Both stories have their “harried dad learns what it’s like to be a dad again” themes, but the added reality of Christopher’s PTSD gives new meaning to this otherwise innocuous children’s film. It’s when Christopher’s stress in balancing family and work reaches its peak that trouble starts in the Hundred Acre Wood; Pooh’s run out of “hunny” and his friends have mysteriously disappeared. Turning to the only friend he has left – Christopher – he goes through the magical door which leads from the Wood to the tree near Christopher’s childhood cottage.

Only this time, it doesn’t lead to the cottage; it leads to a tree in a park across the street from Christopher’s house in London. Christopher was to have taken a vacation with Evelyn and Madeline to the cottage, but his boss has told him to stay behind and work the entire weekend on cost savings plans. In avoiding a pushy neighbor, he dives into the park and encounters Pooh for the first time since leaving the Wood all those years ago. Although Pooh is a walking, talking stuffed animal, it doesn’t take much to draw the correlations between their plights, or to reason why Pooh appears when he does. Both of their respective friends are gone; Christopher takes his work – and Pooh – on a trip back to the cottage to help Pooh find his friends, intending only to stay a few hours without Evelyn or Madeline noticing. 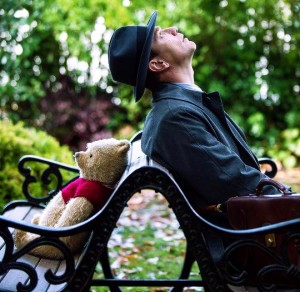 What a life one must have, to cut out those whom he loves most. Yet this trip isn’t just an effort to find Piglet (Nick Mohammed), Eeyore (Brad Garrett), Tigger (also voiced by Cummings), Owl (Toby Jones), Rabbit (Peter Capaldi), Kanga (Sophie Okonedo) and Roo (Sara Sheen). It’s a quest to find Christopher’s humanity, lost in the war and almost lost for good. Thinking about the movie from this angle, each action Christopher takes – whether it’s scaring off imaginary Heffalumps, sussing out the scary thing in the forest, or even shielding his family from harm – is what a soldier, concerned for the health and well-being of his unit, would do.

Christopher Robin is an unmitigated celebration of the human spirit. It doesn’t ask much of you, but it gives you plenty to think about and enjoy. The standard physical comedy of imaginary friends having to deal with the real world doesn’t fail, nor does the film’s heart. You’ll be left with a sweetness not often found in films today; there’s not an offensive bone in Christopher Robin’s body as it takes its time to stress the love of family and friends. Briefcases Full of Important Things can come and go, but your family and friends will be there when you need them most.