Grief and guilt over the passing of loved ones is a universal part of life, regardless of whether we loved someone as much as we could, or if we distanced ourselves from them. The could’ves, would’ves, and should’ves cruelly have their way with us for a while; soon, we find a way to deal with it, relegating that person to best of our memories. However, when that grieving process is shockingly interrupted by an occurrence which pushes you further into despair, your world is suddenly thrown completely out of whack, and that’s where we find ourselves with Hereditary. 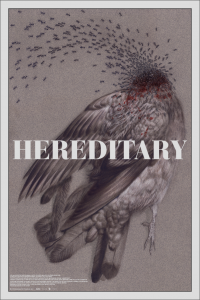 Rarely have I seen a horror film launch a successful all-out assault on an audience, and, by God, Hereditary does it. The 2000 “version you’ve never seen” of The Exorcist comes close to how writer/director Ari Aster utilizes every weapon at his disposal to systematically break us down, scramble our minds, and then destroy us with the film’s final truth. It’s an upsetting and unsettling film which doesn’t hesitate in taking our hand and yanking us down the path where it wants – nay, needs – to go. Upon reaching our destination, we’re not only frightened to our very core, we’re left wondering exactly how we got there, searching our minds for clues or hints the film may have dropped along the way.

Here’s the thing: Hereditary sneakily lays the groundwork for everything to come in the film’s early goings, but you won’t realize it until the film has totally terrorized you and left you breathless. You’ll be too busy marveling at Toni Collette’s powerhouse performance as Annie Graham and where she’s going to take Annie next. Rightfully so – Collette anchors this film solidly as the grieving Graham family matriarch, desperate to keep it together. The word “it” in the last sentence isn’t just the figurative “it” – “it” is her family, her scale model art, and – most importantly – her mind, especially after having to deal with her mother’s death in the opening moments of the film. 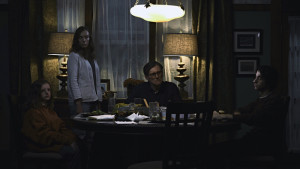 Her aforementioned work with miniatures almost paints a perfect metaphor for the kind of control she so desperately craves over her life. And it’s not just her, either – her husband Steve (Gabriel Byrne) also exudes a firm, more overt control over the family, as opposed to Annie’s kind of take-it-or-leave-it style. It’s not domineering, nor is it ill-intended; they both want everything to be just so. Their house is as clean and copacetic as the miniature models Annie constructs in her workshop; as the film wears on and life wears Annie down, we see both the house and her workshop in irreparable disarray, especially after another tragedy strikes.

All throughout the film, there’s something going on which doesn’t allow you to sit in pensive silence. If it’s not onscreen action, it’s a stray sound or a subtle click grabbing you through the speakers. Or it’s the tension of a long take giving you time to fully see what the frame holds for you, just out of the eyesight of one of the characters. Hereditary unsettles you right from the off with an unbroken shot of Annie’s workshop, sunny yet foreboding, especially when the camera finally pushes in on its intended subject. It’s Aster’s careful attention to detail which keeps Hereditary cranking, even when it’s quiet and subdued. 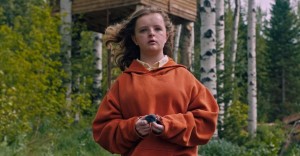 We’re hammered with images of chaos uncharacteristic of this small Utah town. A field burns with a wraithlike figure waving at us; someone suffers a throat-closing allergic reaction in a sequence which uses rapid-fire editing uncannily effectively; bodies are tossed out of windows and set on fire. Aster gives no relief from these ghastly sights and more, thrusting us forcefully through Annie’s journey from being an estranged daughter and aloof mother to a woman dangled over the edge of insanity.

There’s more to Hereditary than just its scares and jumps. Pawel Pogorzelski’s moody cinematography plays with shadows and light, creating a surreal world out of the Graham’s stately wood-sided home. Aster and Pogorzelski nearly suffocate us visually with crushing darkness and atmosphere, making you believe you’re seeing objects where there simply should not be, especially in the dark corners where our minds and eyes go when we’re frightened. All the while, we’re rapt as we watch Toni Collette give the performance of a lifetime. She makes her fight to keep her mind and family together while slowly going crazy completely believable and palpable, even if she’s lashing out in anger at her son Peter (Alex Wolff) or quietly absorbing the shock of the events leading up to the film’s climax. 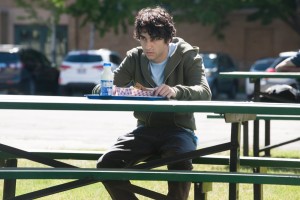 Similar praise must be given to her supporting cast. Gabriel Byrne is absolutely wonderful as Annie’s husband Steve, who tries his damnedest to not only cope with his family’s losses, but to keep living while witnessing his life turned upside-down. Both Annie and Steve’s roles are challenging and demanding; both of them rise to the occasion and meet it head-on, cutting devastating swaths of bug-eyed madness and soul-rending heartache throughout the film.

Newcomer Milly Shapiro plays withdrawn daughter Charlie with note perfection; with a stare as blank as an asylum wall and her appropriately-understated movement, she creates one of the most haunted and haunting characters committed to film. Likewise, Wolff gives us something real, a true picture of a boy unsure of his place in the world and with his family. The pain behind his Peter’s existence shows through in every moment he’s onscreen, even when he’s meant to be in neutral or happy surroundings. 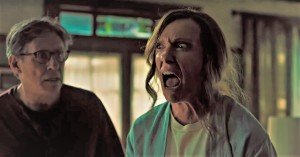 Hereditary is not content to hide in the shadows, jump out at our most vulnerable points, and scare us senseless by yelling “BOO!” Instead, it shows us what’s in the shadows and the evil reasons why they’re there, teasing us with fleeting glimpses before ripping the curtain down and shattering us with its overpowering reality. Don’t go into Hereditary expecting to be scared or to have a good time with simple frights; look to be truly horrified by the darkness surrounding the Graham family, approaching them with an undulating haste, and threatening to viciously engulf them. Hereditary stands as one of 2018’s best, lingering in your mind for days afterward as you marvel at how this film weaves its tale while slowly closing you in its horrifying grasp.