The Shape of Water

Posted by Eddie Pasa on December 8, 2017 in Movie Reviews / No Comments

Let’s face it: I like films about broken people. People with a chip on their shoulder, some kind of physical/emotional/mental handicap, or an attribute holding them back from being normal. Normal, to me, is the stuff of which Nancy Meyers films and the like are made. Don’t get me wrong – I enjoy them from time to time and they have their place. But they’re more of a pretty rock face smoothed over, with no crags or crevices on which to find handholds. 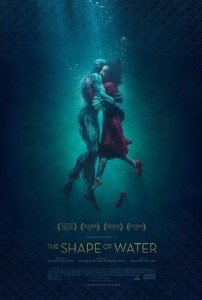 Fewer films have featured a truly dazzling collection of broken people like those found in The Shape of Water. Most of this is rooted in a lack of love in every character’s life, either just out of reach or self-imposed. From this sprouts hope and horror, the latter of which – surprisingly enough – comes from the human side of the equation, not the supernatural. The film cradles its characters like a child delicately showing you their favorite butterfly, all at once pointing out the beautiful and the ugly parts.

The Shape of Water speaks in a language that can only be defined as “pure cinema” using Guillermo del Toro’s storied dexterity and humanism. We can’t help but fall in love with the lyrical way he presents his story, told with shades of greens and contrasting browns, and beautiful cinematography which brings out the rich details of this film. 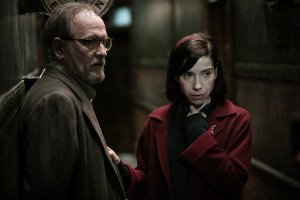 We start immediately as the camera takes us on an underwater journey through the bottom of an ocean into a hallway leading to Elisa Esposito’s (Sally Hawkins) apartment, where she floats asleep above a chaise lounge she uses as a bed. This dreamlike, one-take shot and the accompanying voiceover by Elisa’s neighbor and friend Giles (Richard Jenkins) sets the mood for what’s to come – a fairytale with the damsel in distress, the heroic rescue, and the villain trying to take them all down.

Thing is, the damsel in distress isn’t a damsel; it’s a male, humanoid aquatic creature supposedly found in South America by the formidable Colonel Richard Strickland (Michael Shannon). He’s the military man in charge of the US government’s research into how this creature he calls The Asset (Doug Jones) can benefit them in the 1960s Space Race. Cold, calculating, and ruthless, Strickland doesn’t care for anything or anyone, even his own family, whom he keeps at arm’s length with an air of general distaste. 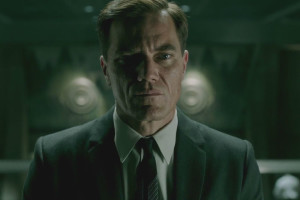 He personifies pure evil with not a shred of decency in him; all that matters is the job and how efficiently he can get it done. Through torture and all manner of petty-minded action, he takes everything he can get from The Asset – which isn’t much, to be truthful, seeing as how they can’t communicate. It’s also that Strickland is unwilling to communicate, relying more on brutality than intellect to get what he wants. Even though Dr. Robert Hoffstetler (Michael Stuhlbarg) argues for a more gentle approach, Strickland can only be seen as a man behind layers of impermeable concrete walls, never giving in to anyone trying to distract him from his goal.

Completely opposite him is Elisa, a sweet-natured, lonely, mute janitor at the research laboratory where The Asset is being kept. Unlike most films featuring someone with a disability, she’s not treated with kid gloves. She’s a human with wants and needs (which we see her tending to in her bathtub at the beginning of the film) just like everyone else, and she’s given no special deference over anyone else in the film. Her only quirk is that she speaks in sign language which – thankfully – Giles and lab co-worker Zelda (Octavia Spencer) understand. 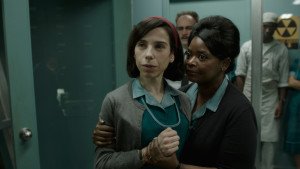 Another involving tactic del Toro uses is not just to simply subtitle what Elisa’s saying (although subtitles are used, one time for extremely humorous effect), but to have Giles or Zelda converse with her plainly. Through inference and repetition, we know exactly what’s being said without having to resort to overt measures. It also leaves us room to focus more on the marvelous performance Hawkins puts forth as she’s drawn out of the ho-hum and into the thrillingly exciting.

Politics of the 1960s – both in the traditional sense and extending to gender and sexuality – burrow themselves deeply within The Shape of Water’s screenplay. Women are seen as pushovers and objects to be seen and not heard, which leads into why Elisa’s a perfect employee at this highly top-secret laboratory. Her silence is seen as a positive, but she wields it as a weapon after establishing a kinship with The Asset through hard-boiled eggs and Benny Goodman records. She says it best: “When (The Asset) looks at me, he doesn’t see me as incomplete.” 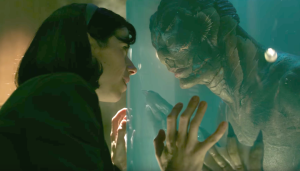 Oh, that we could be held in such regard by our own mates, family, and friends! The love which spawns between Elisa and The Asset defies boundaries set by gender, sex, and classification. The film’s 1962 setting also makes plain the metaphor between these two and the heightening racial tensions (referred to overtly at least twice in the film) of the period. It may be an inter-species relationship, but what do you expect of a time when people of color were seen by whites as a different species altogether?

Even the film’s two sympathetic male characters, Giles and Hoffstetler, are beholden to secrets which threaten their very lives in the 1960s. Both Jenkins and Stuhlbarg, respectively, play them with grace and nuance, the conflict in their souls not easily betrayed by their posture and their look. However, much like Elisa and The Asset – and even Strickland, in his own twisted way – they’re all on the brink of breaking through to their desired ends; they’re all straining for that bit of happiness all of us try to grasp in our own lifetimes. 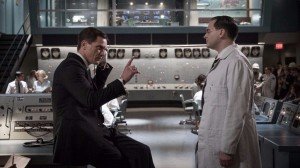 It’s a happiness highlighted by del Toro’s direction, the cast’s performances, and Dan Laustsen’s picture-perfect cinematography, all backed by an effective score by Alexandre Desplat. There is no doubt The Shape of Water will wind up on many Best-Of lists this year (we nominated it for multiple awards, although it won none). However, it’s one of the few Best-Ofs in recent memory with staying power that guarantees it will absolutely matter as time goes on. By this, I mean it won’t be one of those flash-in-the-pan, only-here-for-awards-glory films which seem to clog the multiplexes like bacon fat in an artery around this time of year. Instead, The Shape of Water’s art is of a joyous, optimistic, and utterly sublime vintage, with multiple layers to peel back and discuss with repeat viewings.