Posted by Eddie Pasa on November 16, 2017 in Movie Reviews / No Comments

(EDIT: This review is dedicated to Special Unit co-star Debbie Lee Carrington, who passed away in her sleep on March 23, 2018.)

In 2006, comedian Christopher Titus created and filmed a television pilot called “Special Unit,” in which a disgraced LAPD detective must prepare a ragtag group of rookies for the field. The catch? Every one of them is disabled. The pilot episode lasts 21 minutes and packs a large amount of comedy into its short running time. It’s totally funny and not politically correct in the slightest, and the word “retard” gets thrown around a lot.

Yes, the lead character is an abrasive alcoholic who sees his charges the way a lot of the world sees the disabled, taking them at face value instead of treating them like people. Or, worse, believing their disability is who they are and nothing more. As the parent of a disabled 5-year-old, I might be speaking a little bit from personal experience. 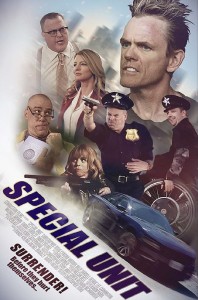 Which is why I enjoyed Titus’ 109-minute expansion of his pilot. Special Unit is a labor of love, designed to take the stigma off folks who drive cars with the blue tags hanging from the rear-view mirror. This feature-length look at Van Nuys detective Garrett Fowler (Titus, also credited as writer and director) and the four would-be cops he’s saddled with maintains every bit of the pilot’s tart and caustic flavor.

Fowler’s a disgruntled, permanently-sozzled firebrand of a detective, a permanent fixture in the ignorant seat and creating hell for anyone who dares to come near him. He’s a self-centered guy, and his shenanigans have thrown him out of favor with both his captain (Billy Gardell) and Mayor Tara Small (Cynthia Watros), the latter of whom happens to be his ex-girlfriend. Small seizes upon Fowler’s latest screwup to kill two birds with one stone: pull a massive PR stunt to aid her re-election and aggravate Fowler.

The PR stunt involves Fowler taking disabled police recruits – who’ve already passed the police exam – and training them to be proper detectives. Of course, Fowler – who’s never seen out of the bottle for the first half of the film – doesn’t take kindly to this, referring to the four finalists as “wobblies” and “retards.” He is the worst of American incivility, standing in for those who see the disabled as a burden and a nuisance. They’re only there because of the Fairness in Disabilities Act, and there’s no way they can do the job the way he needs it done. 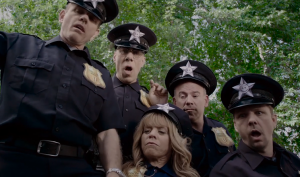 But he starts to take notice as their hostile personalities drop away and they show aptitudes which might actually make them good detectives, therefore helping him look good. Alvin (David Figioli) is an autistic fountain of knowledge who turns violent if touched; Sophie (Debbie Lee Carrington) possesses a crack shot and a temper beyond control; Morgan (Michael Aronin) has a Sherlock Holmes-like ability to investigate a crime scene, but can’t speak without stammering horribly; and wheelchair-bound veteran Mac’s (Tobias Forrest) computer wizardry gets problems solved, but he can’t help hacking into secure government sites or spouting vapid conspiracy theories.

The movie takes its time as personalities and skills are given exposition; it’s all for the funny, though, culling from Titus’ stand-up sets (notably from his “The Word Retard” segment from “Voice In My Head”). It’s also to give air time to his team, most of which is spent decrying the many ways society has stripped them of their dignity. We’re meant to laugh, but we’re also meant to think about the varying ways the disabled are treated, either with kid gloves or with outright indecency, when all they want is an even shot at life on their own terms.

Keeping with Titus’ trademark wit, vitriolic jokes are told – by both him and the rest of the cast – at the disabled’s expense; nobody delivers the line “I LIVE AT ASS LEVEL!” quite like Carrington does. But Titus’ brand of humor, stemming from his life experiences, involves working through the ugly to get to the shine. Eventually, the hilariously acerbic tone gives way to a better understanding, although it may come with an errant knife in the back. 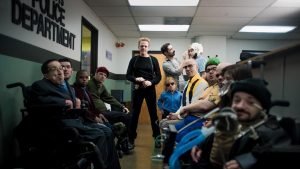 Am I giving this film a positive review because of my own baggage? That very well may be. It has a rough-hewn charm, with its budget provided by Titus’ crowdfunding outreach. As a first-time director, Titus can tell a story, keeping us focused on the funny and the plight of the disabled, even though some of his technique might not be what others might call “polished.” Yet knowing where the director’s intentions lie, knowing that it’s not a vanity project or some other pointless idiocy, is just as important as what winds up on screen.

Special Unit will make you uncomfortable with its jabs at disabled life. I can’t speak for every disabled person, but as the father of a crutch-using child with Caudal Regression Syndrome, I can say with certainty that Titus’ heart is in the right place. The disabled in Special Unit don’t want pity or fear; their only wish is to be treated like normal people. If the world worked the way it should, Titus wouldn’t have to make this film. However, as we stand, we’ve still got a ways toward accepting the disabled as a part of our everyday lives, and Special Unit is hopefully the first to help us inch forward to that.

Links to purchase Special Unit via direct download, iTunes, or Amazon can be found on Christopher Titus’ website. Please click on the picture below to read his statement. 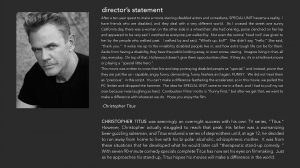