Posted by Eddie Pasa on August 16, 2017 in Movie Reviews / No Comments

When thinking about Steven Soderbergh’s Logan Lucky, I keep flashing back to something Stu Redman said in the 1994 TV adaptation of Stephen King’s “The Stand”: “Redneck don’t mean stupid.” If Soderbergh’s trilogy of Ocean’s films were finely-tuned jazz-funk, consider Logan Lucky to be its scruffier skiffle-band cousin. Sporting a misspelled “DANGERUS” tattoo and a beer instead of tailored threads and a martini, Logan Lucky is full of the same interpersonal shenanigans as the Ocean’s Trilogy, and it’s just as much fun as its bigger-budgeted brothers. 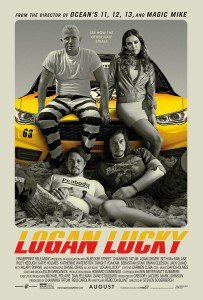 The premise is still the same: a wronged individual uses inside information to organize a heist from his former company, amassing a team full of colorful personalities and quirks to carry it out. Rough-hewn and awkward, there’s nothing slick about these characters, which skyrockets the film’s charm and humor quotient. Although it would have been easy to make this film into an overused, Judd Apatow-style joke, Soderbergh presents it as straight-up as possible, with each character carrying with him or her a sense of “Oh, man, I’ve met him/her before.”

Following the harebrained protagonists of Logan Lucky is downright enjoyable. Soderbergh’s standard low-key approach gives Logan Lucky a lived-in, non-artificial feel, placing us alongside blue-collar workers trying to get out from under life’s boot. However, it’s not the glitz of Las Vegas in the spotlight; it’s the backwoods of West Virginia and North Carolina which introduces us to a small microcosm of construction workers, con jobs, and safecrackers. 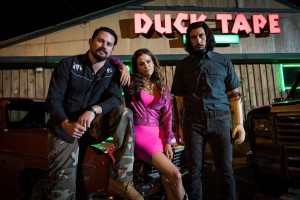 Each player has his or her own cross to bear. Our hero Jimmy Logan (Channing Tatum) has just lost his construction job at the Charlotte Motor Speedway – to which he has to commute back-and-forth from West Virginia – over a reason of insurance. (General Norman Schwarzkopf would describe the motive behind this firing “bovine scatology.”) His war veteran brother Clyde (Adam Driver) is repeatedly ridiculed by strangers over his prosthetic hand. Their sister Mellie (Riley Keough) seems to be the only happy sibling, employed at a hair salon and doting on Jimmy’s daughter Sadie (Farrah Mackenzie).

They’re the latest endowed with a run of bad luck endemic to their entire family, known backhandedly as the “Logan Curse.” But Jimmy’s got a plan to undo all of that and break out from their prophesied fates: robbing the Speedway. However, he’s gonna need help, and that’s where the deceptively smart explosives enthusiast Joe Bang (Daniel Craig) and his brothers Sam (Brian Gleeson) and Fish (Jack Quaid) come in. 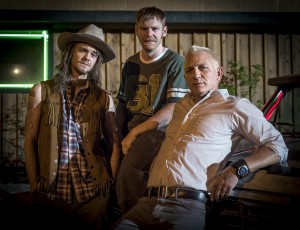 Tatum’s Jimmy may be the central character of Logan Lucky, but it’s the aptly-named Joe Bang who commands our attention. Imprisoned with only a few months left on his sentence, there’s no chance he wants any part of what Jimmy’s got planned. When we first meet him, we see there’s more to him than just being a prison inmate in some backwater town; his cheeky rant about his doctor-prescribed salt substitute defines how we should take his character. Rebecca Blunt’s screenplay and Daniels’ clipped-yet-eloquent performance interweave as both the spark and the fire of Logan Lucky, and it’s almost a shame the film wasn’t totally about him.

No, we’re here to see if Jimmy can pull off a small conspiracy to get out from underneath his crippling debt and the Logan Curse. Of course, Soderbergh captures it with his signature “cool.” This “cool” encompasses more style and directorial choices which could fill a book, so I’ll try to be short about defining it. Soderbergh stocks his films with thick and unconventional personalities. These characters don’t need to raise their voices to create urgency or drama; he’ll set a stage which forces the characters to be chill. In setting that stage, he creates twists, turns, switchbacks, and double-crosses as both obstacles and objectives. And when the objective is reached, it’s revealed that the obstacles were, indeed, part of the objective.

Like I said… cool. Logan Lucky is the mullet-haired extension of the Ocean’s Trilogy, all of them being the antithesis of standard action-heist films, which involve a lot of explosions, overacting, shouting, and guns. It’s a shot of anti-Hollywood cool in a backwoods pool, even more engaging because of its more down-to-earth nature. Freewheeling, lighthearted, and charmingly hilarious, Logan Lucky isn’t just about a stadium robbery – it may just steal your heart as well.