“Only in front of millions can we truly exist.”
This is the tagline from Don DeLillo’s play Valparaiso (staged here in DC by Forum Theatre in 2007), which shows how one man’s simple mistake casts him into the media limelight, even though there’s a sinister lie at the heart of it. With each revelation, new stories are made up and dramatics are heightened as we go further into Valparaiso‘s subject’s deception. Ingrid Goes West walks a lot of the same territory, a desolate land in which those so desperate for validation find themselves. 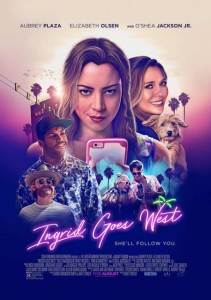 As someone who uses social media to promote the things I do – movie reviews, bar gigs, and other endeavors – I cringe every day at seeing people on various sites asking celebrities for a follow, a like, or even a mention. It’s like their lives are so empty, they have to harangue someone for their approval. Some of them even have the gall to act out in an idiotic fit of self-righteous anger when these celebrities don’t do what they want.

So when faced with Ingrid Goes West, a movie built completely out of this abhorrent behavior… not gonna lie, I squirmed throughout its entire 97-minute running time. This is one of the most uncomfortable movies I’ve ever had the displeasure to watch. Mostly because Aubrey Plaza absolutely kills it as the titular Ingrid, a woman whose very existence hinges on the people she follows via social media.

When we first meet Ingrid, she’s tearfully scrolling through an Instagram feed showing a woman named Charlotte getting married. She grows more frantic with each image and video, obsessively clicking “Like” on every one of them. Finally, we see her get out of the car she’s in and walk over to the wedding itself (seriously, it’s in progress!), pepper-spraying Charlotte and shouting, “Thanks for inviting me, you f**king c**t!”

Yup, that’s Ingrid’s first spoken line. Later in the film, after a stopover at a mental health facility, we learn that she and Charlotte had no ties whatsoever; Ingrid was only one of Charlotte’s Instagram followers. And once another Instagram celebrity, Taylor Sloane (Elizabeth Olsen) shows her one sign of acknowledgement, Ingrid’s off to the races again in full stalker mode. Through self-delusion, pathological lies, and fake heroism, Ingrid insinuates herself into Taylor’s life and attaches herself like a barnacle. She doesn’t care who she hurts or uses, even if it’s someone like her new landlord Dan (O’Shea Jackson) who gives her every opportunity to be straight-up with him.

Plaza (who also executive-produces) doesn’t just play Ingrid; she becomes Ingrid, a shell of a person looking to fill her insides with what’s on her target’s outside. Stripped back to her very basic self (which we only see twice), she’s a nobody. Devoid of personality or self-worth, Ingrid takes on the characteristics of those she haunts, buying and consuming what she sees her idols buying and consuming. There’s no trace of the snarky, acerbic Plaza we’ve seen before in Scott Pilgrim vs. The World or “Parks and Recreation,” and her awkwardly dangerous performance keeps the film on a razor-sharp edge.

Ingrid Goes West is as much of a satire of social media vultures as it is social media itself. The film’s uncomfortable because it’s true; all you have to do is click on any random post by band, actor, or some other entity in the spotlight and you’ll see replies saying “follow me plz” or “why won’t you follow me” or “I just want you to write back.” Ingrid Goes West is scary, desperate, and painful, sometimes venturing into psychological horror instead of its intended dark comedy.