Posted by Eddie Pasa on June 9, 2017 in Movie Reviews / No Comments

Zoe Lister-Jones’ examination of a troubled marriage finding its salvation through music in her film Band Aid is a film which makes you – all at once – laugh out loud and cringe at its truth. From being a childless couple in a yard full of children playing, to the late night arguments over the pile of dirty dishes in the sink, to the moments when husbands suddenly tune out for no reason, Lister-Jones – who wrote, produced, and directed Band Aid (and co-wrote the songs as well) – rounds up all the hilarity and heartbreak of married life into one neat, short shot to head. 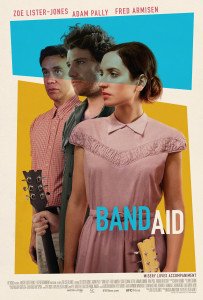 The aspect of this film which hits hardest are the professions held by its lead characters and the reasons behind them. Contrary to what the world thinks of folks like Anna (Lister-Jones) and Ben (Adam Pally), they aren’t suits in a boardroom or office-bound keyboard-pushers; she’s a former author now driving for Uber, and he’s a former artist who creates logos for companies. Lister-Jones’ vision of the “new normal” has these two characters doing what they can to pay the bills and taking little time to care for themselves and their relationship. Of course, the exaggerations are extreme, with Ben mostly padding around the house and being slovenly unkempt, while Anna deals with misogynist pricks who ride in her backseat.

They’ve taken their shot at greatness and nothing panned out for them, so they’re taking it out on each other. When we first meet them, they’re seething at each other over perceived slights and grievances, and the only time we see them in some place of calm is when they’re smoking their medical marijuana. Right away, the fault of them working alone and not together threatens to rip them apart. Through spiky dialogue littered with constant jabs and parries, Anna and Ben are two people clinging to a life raft and neither wants to give up their handhold in order to help the other survive.

An idea hits them during a visit to a child’s birthday party, after they pick up toy instruments and have a go: they’ll turn their aggressions toward each other into songs. The addition of creepy next-door neighbor Dave (Fred Armisen) on drums adds not only a foundation for their guitar and bass-driven angst, but another dimension to their relationship as a sort-of ersatz son. However lively their music sounds, their lyrics are undoubtedly intent on being the equivalent of a punch to the face, becoming an obvious point of concern for the fragile Dave.

Lo and behold, it starts working. Tensions are eased; issues are worked on; and earnest, non-perfunctory sex is had. And when they get up onstage to debut their act, the musician in me rejoiced at seeing the disastrous results of the first-gig-jitters so hysterically immortalized in a sequence which has me smiling at the mere recollection of it. Hell, just thinking about the whole of Band Aid has me smiling at its charm, wit, and undeniable good will. Musicians and artists will totally get the little things which make Band Aid sparkle and pop, like writing a killer song under the influence of something and not being able to recall it later, or running into self-proclaimed “artists” whose inspiration and production defy any kind of logic or reason. 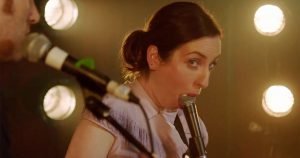 Band Aid isn’t an easy-breezy comedy of errors; it’s a true-to-life analysis of how stagnant can give way to ruin if left unchecked. It’s also how all one needs to get out of said stagnation is a relighting of the fires, which is what Anna and Ben wind up doing for each other. As Anna and Ben, Lister-Jones and Pally give this film the naturalness it aims to achieve (excepting one little bit about Netflix which seems a little forced, but it’s relatively harmless) through nuanced and grounded performances. In the hands of another director, this film would have been a trite soap opera; thankfully, Lister-Jones steers it well away from the melodrama in favor of a lived-in feel.

There’s a lot of life’s truthful whimsy Band Aid takes the time to point out and dissect; while we laugh at some of it, we gawp in astonishment at how hurtful the other bits can be. But the phrase “push through” – brought up at several different times in the film, all in different contexts, one being screamingly riotous – defines this movie, and it’s a notion which each of the characters has to understand in order to learn, whether it’s the hard way or by happenstance. Lister-Jones examines each troubling facet of Anna and Ben’s life starting with the façades under which each person has retreated; from there, she slowly deconstructs everything in an effort to get these two back to square one.