Born With A Defect 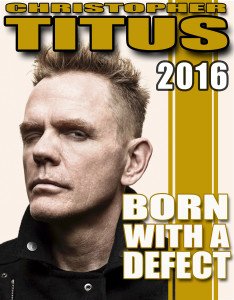 Bringing it hard to the masses since his eponymous Fox Television show debuted in 2000, Christopher Titus’ sharp-tongued, abrasive comedy regarding his family life and his own personal demons speaks volumes in undefinable ways. His show and stand-up specials bear both pain and love in such an inimitable way that his words wind up uniting both performer and audience in the horror and hilarity of our shared struggles. It’s a peek into a tumultuous life without being made to feel like you’re guiltily watching a train wreck; he wouldn’t be doing this if there wasn’t a modicum of hope and inspiration involved.

He shows are brutally honest about what he’s done to crawl out from underneath the cloying miasma of fear and failure. In his first comedy special Norman Rockwell is Bleeding, he recognizes his life is screwed up, professing his love for others like him, “’Cause if you’ve been through a lot of shit in your life, you know every time you see the shit just about the hit the fan… you step to the side of the fan!” I use this quote because Titus has seen the shit, worked hard to rise above said shit, stepped to the side of the fan, and is now sharing the payoffs of that work with us.

He’s one of those comedians who talks about relevant things in our lives, from the minutest of minutiae to the biggest biblical beam in the eye. Titus is not some Saturday-night-open-mic comic who only says funny things which have no bearing on us after we leave his show or turn off the DVD player. In his previous six specials, he’s drawn on life experiences from his upbringing, his years as an alcoholic, and abusive relationships (let’s be absolutely clear here: he was the abused, not the abuser), all while clawing his way to happiness and stability.

A lot of his comedy is drawn from how his father Ken sort-of backhandedly brought him up through making life lessons out of his awkward learning experiences, whether due to their poor financial status, Ken’s six marriages, or finally understanding the knowledge Ken was trying to impart. However, throughout his first six shows, very little has been mentioned about Titus’ kids or being a father from his own perspective. The end credit roll of Norman Rockwell is Bleeding features a picture of his (now) ex-wife pregnant with their firstborn; he shares his reaction to fatherhood after having his first child shortly before 9/11 in The 5th Annual End of the World Tour; and he talks about the effects of his divorce – which was finalized on June 6, 2006 (yes, 6/6/06, which he plays up hilariously for a sentence or two) – on his children in Love is Evol. 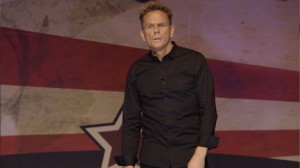 This time out, he puts his personal experiences as a father front and center in his new special, Born With a Defect. As a father of six years at the time of this writing, I’ve been looking forward to this show, hoping to hear the same wit applied to the joys, quirks, glitches, and the hard reboots a parent’s brain has to execute because of some mind-boggling action a child has chosen to take. He has presented his childhood and adulthood as the turbulent firestorm that it is; do you honestly think his take on parenthood is going to be any less of a scream? The eye with which he saw his own father is finally turned on himself, and wow, are there bittersweet, heartwarming, and altogether uproarious truths he’s learned.

He’s not saying he’s the perfect father – I mean, who in this day and age can be, what with kids listening more to what pop culture icons tell them than their own parents? But he does point out his own foibles and stumbles, such as being driven to mumble-arguments with himself after finding his son on the couch wearing only a t-shirt, or having to deal with pointed questions from his daughter about race relations, or wondering “What is that smell?!” when he walks into his house. Titus’ growing pains as a youth have extended to his parenting, where a new generation doesn’t get the knowledge he learned the hard way, and it’s this dissonance with which he fills this 106-minute examination of his life as Dad. 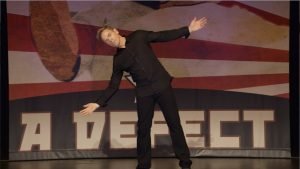 He has advice for parents, one being the standout rule: “You have one job as a parent… don’t raise douchebags.” In trying to adhere to his own advice, he demonstrates going a yard and a mile to make sure they’re informed and smart, even though he thinks at one point that his son suffers from a special kind of stupid. (To his relief, he discovers after hosting a party consisting of his son’s friends that the kid’s just normal.) However, it’s not all barbs and forked-tongue observations; there is an impossibly sweet moment involving his new wife and his ex-wife – in a church, no less – which makes both him and you believe these lessons have not fallen on deaf ears.

Born With a Defect may just be the verbal equivalent of spiking your cocktail with more than the required amounts of alcohol and making you think you’re just sipping a harmless drink. You may enter parenthood hoping that your baby will be “sweet Jesus tears,” but the only tears you see will be your own. However, Titus knows better than to make you think you’re alone; he brings parenthood to life in his own inclusive, “You know exactly what I’m talking about” manner with which he has delivered many other truths he’s either found out through trial and error, or because they fell right on his face. 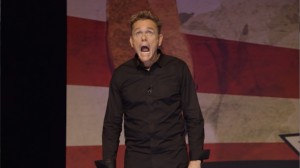 Born With A Defect stands as one of the best shows Christopher Titus has written, and having done six magnificently-written shows beforehand, that’s saying something. It’s because we’re caught up, fully immersed in the “now,” and we’re watching him riff on his life as it unfolds instead of mining comedy from years past. Again, he takes us to uncomfortable-because-it’s-true places, but with a purpose as parenthood is never 100% happy, with the happiness-to-“Dear God, what’s next?” ratio being about 70%-30% in my estimation. Born With a Defect speaks to that 30%, pulling no punches as he picks at the points where parents sometimes find themselves despairing about their children, reconsidering the sex they had that brought this child into the world, and wishing they could go back to driving a Lamborghini instead of a minivan. And out of that despair comes hope, which is what Titus slyly mixes among the vitriol that both he and life have cooked up for us.

(To fully understand the second-to-last sentence, Born With a Defect is available as a $9 download at https://www.christophertitus.com/titusspecials.) 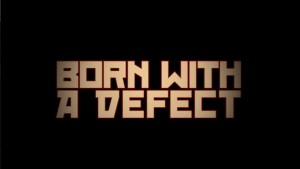 MPAA Rating: Not Rated (contains language befitting of an adult-oriented comedy show, but not as much as you’d expect). Running time: 106 minutes. Released by Combustion Films. See end of review for purchase information.
Posted in Comedy Review, Movie Reviews, New on DVD and Blu-Ray