This review will not feature a star rating due to the author’s conflict between artistic and moral reasons.
MPAA Rating: PG for some mild rude humor. Mid-credits scene: yes. Running time: 93 minutes.
Released by Twentieth Century Fox and DreamWorks Animation.

On the surface, Trolls is a fairly innocuous film about being brave, being who you are, and doing what you’re meant to do. It also stresses the importance of happiness coming from within and an eschewing of external influences upon your happiness (or lack of it). Accompanied by a sparklingly effervescent pop soundtrack (which includes one of my favorite songs of the year, Justin Timberlake’s “Can’t Stop The Feeling”), the film bobs and weaves its way into our hearts and inspires us to do better by each other, a moral for which Trolls is to be applauded. However, underneath its frothy sheen lie problems which the film cannot reconcile with itself. 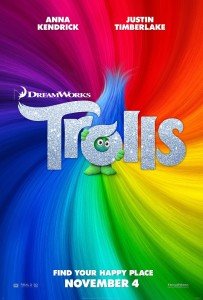 Little children, the film’s target audience, will no doubt be captivated by the bright colors and the funny voices. The Trolls, of course, are the diminutive creatures with the long, frizzy hair which have become pop culture staples in the US from the 1960s onward. We’ve seen them in various animated productions in previous years, finally culminating in DreamWorks Animation’s vivid feature film starring the well-cast Anna Kendrick as Troll princess Poppy and Justin Timberlake as a naysaying, paranoid Troll named Branch. Opposite the Trolls are the Bergens, led by King Gristle (John Cleese) and his son, Prince Gristle (Christopher Mintz-Plasse).

When I say “opposite,” I don’t mean it as a one-faction-versus-the-other type of thing; they’re completely different in every way possible. The Trolls are happy-go-lucky sprites full of love and warmth, always with a song in their hearts, a dance step in their feet, and timers on their wrists to go off when it’s time for hugs. By contrast, the Bergens are cold, bland, and drab, and they’re perpetually in a bad mood which can only be lifted temporarily by participating in Trollstice, a celebration where Bergens ceremonially eat Trolls to make them happy. Poppy’s father, King Peppy (Jeffrey Tambor) can’t have that, so he leads an escape from the Bergens’ land and settles his people in a place well out of reach. 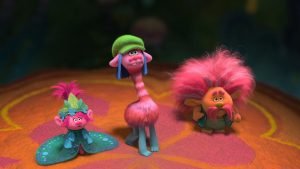 But with the passage of time and a youthful overconfidence in their hiding abilities, Poppy decides to throw a huge party which the Bergens notice and interrupt, taking several Trolls away for Trollstice. Poppy takes the responsibility upon herself to get her friends back, reluctantly accompanied by Branch, who warned her not to throw a loud party in the first place. Their effort yields respect for each other, and it also finds them a newfound Bergen friend, a lowly scullery maid named Bridget (Zooey Deschanel) who has the hots for Prince Gristle.

Like I said, on the face of it, Trolls is typical children’s fare, presented in a very engaging and delightful film featuring lively animation and toe-tapping music which will have you singing along in your seats. Anna Kendrick and Justin Timberlake make a wonderful voice pairing, with Kendrick’s vibrant deliriousness contrasting Timberlake’s spot-on snark, dripping with biting sarcasm for most of the movie. However, the unexpected surprise of this film is the casting of Zooey Deschanel as the preciously awkward Bridget, caught between who she is and being held back from what she wants by her station in life. Deschanel flips from schmoozy to blundering to timid to her signature “out there” voice with a deftness that has to be heard to be believed, providing one of the most memorable voice performances I’ve heard in a while.

Yet the issue with Trolls is its pushing of the “happy is good and sad is bad” agenda. Sure, in this fantasy realm, there’s no gray area to reflect real life, where happiness and sadness occupy varying amounts of one’s psyche. What Trolls wants to say (and says verbally in the film) is that happiness comes from within, and we shouldn’t be dependent on drugs (eating trolls gives you a short-lived euphoria? Can the metaphor be any more transparent?) to lift our spirits. As scripted by Jonathan Aibel and Glenn Berger, the writers of other children’s films such as the Kung Fu Panda series and two of the Shrek films, it’s almost a demonizing of depression medication and mood-altering drugs.

Yes, Trolls takes place in a world where problems can be solved with a big musical number and hugs, which is the conceit of the film; while I understand and accept this, I consider it a dubious lesson to impart. If sadness or depression were a heavily-bleeding wound, what Trolls would have you believe is that you should try to stanch the blood with nothing more than a glittery Band-Aid instead of trying to heal it properly. For what it’s worth, the notion of understanding one’s problems and treating them with the respect these issues deserve is admirably shown, albeit only briefly in the way Aibel and Berger have shoehorned it into the film.

Even the Trolls’ treatment of their friend Bridget is questionable, as they change her appearance and encourage her to lie about who she is to woo Prince Gristle. Yes, it’s all done for humorous purposes and with no ill intent, and you know in a film like this, it’ll get sorted out by the end; again, it’s an emphasis on the superficial, not what lies beneath. For all of the Trolls being perceived as the “good guys” and the Bergens as the “bad guys,” they share very similar problems, and it’s not that the Bergens are “bad” – well, they’re not all good, as Chef (voiced impeccably by Christine Baranski), the Bergen advocating most for Troll hunting and eating, is quite villainous. The Bergens are portrayed as simply misguided; some of them (especially in the way Christopher Mintz-Plasse plays Prince Gristle) are downright loveable.

This is why I am assigning no star rating to Trolls, which should not be taken as “zero stars”; instead, if you will, it’s more of a “no contest” plea. It’s not because the film is bad; on the contrary, the voice cast is amazing, the animation is wondrous, and I appreciate the courage it has in saying what it wants to say. However, I’m at loggerheads with how it says what it wants to say. Trolls cannot have it both ways, and it most certainly attempts to do so. If we are to live in the fantasy world of the Trolls and the Bergens and accept no in-betweens when it comes to happiness and sadness, then it shouldn’t be trying to heave lessons on us. Yet it does, and those lessons are hard to find purchase when the protagonists and antagonists are on two extremes of one spectrum with no middle ground available. Assimilating sadness by blanketing it with forced happiness isn’t happiness at all, and one would hope the film’s target audience will be taught to learn the difference.