Posted by Michael Parsons on November 3, 2016 in Movie Reviews / No Comments

To keep her diminutive fluorescent-haired race from being devoured by big lumbering Bergens, a young, bubbly Troll named Poppy embarks on a journey to save her friends and put everybody in a fantastic mood. Directed by Walt Dohrn and Mike Mitchell (both involved in the “Shrek” franchise), this movie has fun to spare, though it might’ve spared a little bit more( or perhaps saved it for the sequel). There are a lifetime of antidepressants packed into this 90 minutes of rainbows and pop-music, like “Beat Bugs” on steroids, and little Poppy is handing out the pills.

Gee whiz, if I could only measure the brain stimulus in my 4-year-old whilst absorbing “Trolls”, it would probably look something like an EKG machine hooked up to a car battery. I heard nothing from her about the film for almost a week, until yesterday on the way to school she asked, “Dad, can we see that “Trolls” movie again?”. Did it take that long to sink in? I’m praying we receive an end-of-year screener from the studio.

The flick is an undeniable blast for a spell, but never has something so clever, creative and colorful become such a chore to sit through. Energetic and joyous to a fault, Dreamworks’ newest animated feature is perhaps something to be watched in segments; the color palette alone will make 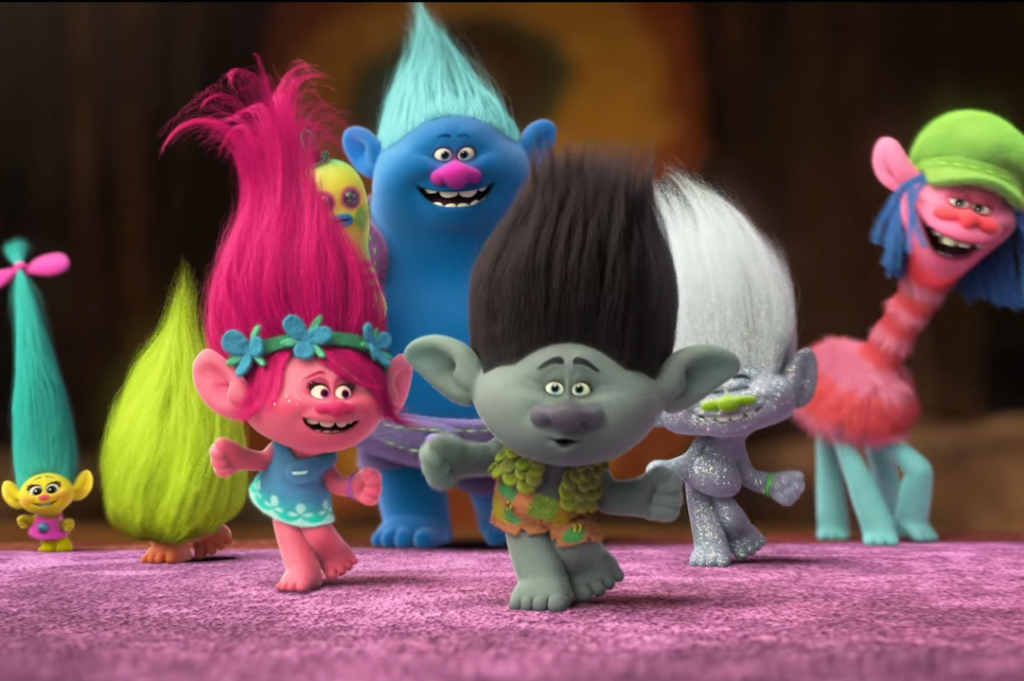 everything outside of the theater look drab. So over-the-top that overload would be an understatement, it almost perpetuates ADHD in the target audience.

Only a select few talents could lend their voices to these characters. Those being Anna Kendrick as the insufferably upbeat Poppy, and Justin Timberlake as the diametrically opposed Branch, a Troll who lost his flare as a kid and is now a cynical sourpuss. For the Bergens, consuming a troll is not only a rite-of-passage, but believed to be the only source of happiness for these hopelessly downbeat creatures (a segment set to the tune of Gorillaz “Clint Eastwood” is perfect).

The trolls escape, and with nary a troll soul to be found,  young Bergen King Gristle (Christopher Mintz-Plasse) is deprived of this ritual and doomed to a perpetual funk. You don’t throw a party in a foxhole, warns gloomy Branch, but Poppy can’t resist–jackpot for the Bergens, who crash the celebration and make off with a few of their bright-haired buddies.

With the proliferation of PG-Rated animations hitting the big screen, it’s hard to gauge what is entirely friendly for the tykes, and on the upside, “Trolls” will delight most under the age of 10 without scaring the crap out of them. There are plenty of musical numbers and about a thousand cutesy bits that I can barely discern enough to explain for the purposes of a review. By the time the credits roll, it’s all become a bit hallucinatory (our screening was in 3D–this is one of the few that I would actually recommend putting on glasses for); it’s an explosion of florescence with a vibe so overwhelmingly and hyperactively positive that it almost masks a dopey storyline.