Review of the Day: “In A Valley of Violence”

Posted by Michael Parsons on November 4, 2016 in Movie Reviews / No Comments

Essentially “John Wick” in a Spaghetti Western, only with a fraction of the body count, this dusty flick leaves us hankering for a bit more “bang” for your buck. Luckily, it’s available for only $5.99 on VOD.

The non-committal tone of “In A Valley of Violence” vacillates between Tarantino/Rodriguez and Raimi, grindhouse and campy, yet with the exception of one bloody scene, manages to avoid graphic brutality almost altogether. Westerns are back in, and we’ve seen a lot of talented filmmakers drawn to the genre. Perhaps because it’s so easy to blend, like rap and metal, exemplified to the extreme in last year’s cannibal Western “Bone Tomohawk”, or HBO’s “Westworld” reboot series. This particular movie isn’t especially original, but it still has a lot going for it: Ethan Hawke as the mysterious anti-hero, and John Travolta in his first Western (really???) as a washed-up sheriff who just wants peace and quiet.

The film follows lone stranger Paul (Hawke), an ex-Calvary man of sorts headed to Mexico with dog/best friend Abbie (the film’s highlight, portrayed with adorable verve by Jumpy). He has a sordid past, one that is hazy and 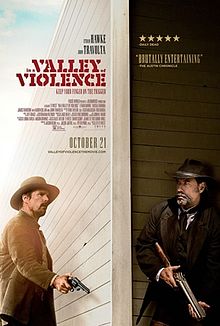 deserves exploring beyond a two-minute fever dream that serves as exposition. Paul stumbles upon Denton, a ghost town with a population of roughly ten people; four of them are dippy thugs who have no real purpose other than harassing the occasional traveling salesman.

In the case of Paul, of course, they cross the wrong dude. In fact, he’s really the only dude, other than the bartender, to cross. A one-sided fist fight turns into a fatal tantrum/retaliation by gang leader Gilly (James Ransone, looking a lot like Christian Bale if “3:10 to Yuma” were a comedy). Left for dead in the desert, Paul…. well, you pretty much know the rest.

Much like Hawke’s character, this film feels like it’s just passing through. An awkward relationship that develops between Paul and Mary Anne (Taissa Farmiga), a sixteen-year-old hotel hostess who clings to Paul like a tick and her annoying, tantrum-prone older sister (Karen Gillan) are respectively silly and grating, but the film is otherwise pretty respectable viewing. Hawke is most lively when chatting with the dog, with whom he seems to have more in common than any of the hooligans (or women) he encounters. More hints at the back story, but this onion remains mostly unpeeled. And his character could’ve used a little adrenaline shot in the final act/retribution, though I suppose I could understand why he’d be tired.

I’m happy that writer/editor/director Ti West has stepped outside of his horror niche (“House of the Devil”, “The Innkeepers”), and I have a lot of respect for him as a filmmaker; “In A Valley of Violence” passes muster as a basic Western revenge flick, kind of like last year’s more somber “The Salvation”.